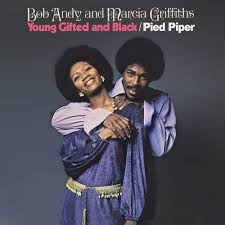 Twofer containing the albums recorded by the duo of Bob Andy and Marcia Griffiths, featuring the hit singles Pied Piper and Young, Gifted And Black. Also included as an extra is the latter in its original Jamaican format without the string overdubs…..Ian Canty recalls the soundtrack to hopeful times in the early 70s…..

The early 70s are painted as a pretty drab time in fiction, but all I can remember of this time in my early childhood was good. Young, Gifted And Black was part of the soundtrack and together with Black And White by Greyhound, they talked of a future of understanding and acceptance. What I didn’t know at the time was the two huge talents behind the sound, Bob Andy and Marcia Griffiths, already had long and successful careers behind them by the time they teamed up.

Bob Andy had been a member of the Paragons, but had left to develop a solo career and hone his songwriting skills. He enjoyed several hits in his Jamaican homeland including Too Experienced (covered by Two Tone band the Bodysnatchers) and provided material for other artists, including one Marcia Griffiths. The common link was Studio One, where Andy worked delivering records and Marcia recorded.

Having two great voices which naturally complemented each other, it wasn’t long before they were working together under the Bob and Marcia name. But the partnership really came into its own when they hooked up with producer Harry J Johnson (of The Liquidator fame). Their version of the Nina Simone song Young Gifted And Black was a Jamaican hit, but Trojan in the UK decided it was a bit too tough sounding for the British public and added some strings. This was a common practice as the Reggae boom hit the skids in the new decade – the UK label amending the JA producers’ rougher versions for mass consumption and hopefully bagging a hit as a result.

Listening to the original recording now it seems unnecessary window-dressing, but it certainly worked at the time as the record lodged itself in the UK Top 5 in 1970 and as a result a long playing record was required. Though on this album I have to say it is a bit of a mystery why the songs are nearly all covers on standards, as Bob Andy had already shown himself to have more than the requisite talent in that department, but the formula worked on the whole. With selections from the songbooks of Dylan, Ashford and Simpson and Jackie De Shannon, it seemed like they couldn’t fail and although the record struggled with regard to sales, it is spot on musically. Putting these two together was always going to pay dividends, given their combined vocal skills.

Bob does get a writing credit on his solo effort Peace In You Mind, which ably demonstrates how skilled he was in balladry. It is followed by a version of It’s A Rocking Good Way and Bob and Marcia blow Bonnie Tyler and Shaky right out of the water and your memory too! This is set to a really nice backing track that doesn’t have too much to do with the song to be honest, but it’s a proper piece of Reggae that must have got people onto the dancefloor in a hurry. Marcia puts in some brilliant soulful vocals on Put A Little Love In Your Heart and the duo’s version of The Onion Song shows both their gospel roots and the natural chemistry they had together. All things considered Young Gifted And Black is a winning combination, songs of love and regret given tender and touching treatments.

Recorded in quick succession after the first LP with Bob in the producer’s chair, the Pied Piper album is built around the hit cover of the Crispin St. Peters’ song of the same name. If Young, Gifted And Black occasionally verged on Easy Listening, this one tumbles over the edge into it that area more than once. The original Reggae recordings are smothered in strings and in particularly isn’t helped by annoying cutesy horn parts, that pop up in an unwelcome fashion both I Don’t Care and Lets Fall In Love. For people who love smooth Reggae love songs, these additions are not really a problem, but those of us who prefer the rougher sounds are left to listen carefully for the hidden, harder roots.

Even so We Know gets the album off to a good start, a pacey rhythm section powering things along on a Bob Andy original and both vocalists are clearly on fine form. He’s A Cousin Of Mine is a prime cut of gentle Blue Beat and the single Pied Piper was a deserved hit, using orchestral touches sparing and highlighting a nice guitar line too. A marvellous confection.

Strange World, with its unusual sparse Reggae sound, is beautifully sung by Marcia and survives the “strings”. Elsewhere her solo See You My Love manages to hit the perfect point between trying to appeal to the masses and the Reggae roots with a dreamy floating flute part enhancing a fine piece of Soul Reggae. On the whole though it is hard not to conclude that the album fell between two stools – the hardcore Reggae fans probably found it too sugary despite the duo’s stellar talents and the Pop fans interest cooling off after the hit.

It was not too much of surprise when the pair went their separate ways after this record didn’t meet quit the success hoped for. Also it is worth remembering that Reggae was heading for a spell in the doldrums as 1971 drew to a close, after a heady run from ’68 onwards. Marcia Griffiths joined the Bob Marley show as one of the I Threes and made some excellent solo records ( Naturally and Steppin’ reviewed here) and Bob Andy busied himself in several projects, including a spell in acting and production. He is generally recognised as one of Reggae’s finest songsmiths.

On this collection we get the full story on Bob and Marcia’s brief but fruitful collaboration. The first album is uniformly excellent, lazy and beautiful feel-good Reggae love songs, ideal for listening to on lazy summer days. The follow up has its good points, but for me goes a bit too far in trying to smooth out rough edges for the Pop charts. Still it is nice to have them both together. Griffiths and Andy were/are consummate and flexible vocalists, able to give true feeling to anything they turned their hands to, They could make a shopping list sound good! Young, Gifted and Black will forever take me back to the hopeful, happy early 70s I knew as a child – the sound of unity and tolerance.