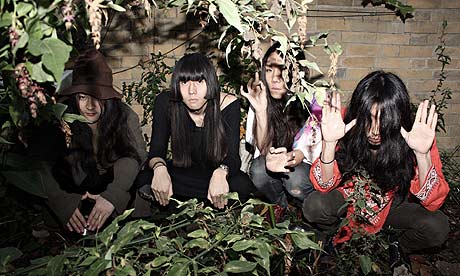 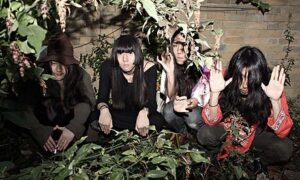 There is something perfect about an old cinema complete with its 1920 interior all semi decayed and frazzled with the dust of a million memories.

The Abbeydale cinema in the Sheffield suburbs is a perfect spot.

Electric music was made for the these kind of places – as the high decibel shakes the decayed rafters it’s a peer into the distorted future surrounded by the distorted past in these picture houses that were once the hi tech future but are now frozen perfect as the magical emporiums they once were.

Sheffield’s Baba Naga set the tone perfectly with their spectacular combination of tripped out visuals and music. Any band that starts its set off with a sitar drone created by some kind of pedal trickery is onto a good thing and as the songs unfurl you are taken on a journey by the three piece’s brilliant playing and mesmerising sense of the beyond.

This is a faultless performance that picks up on aspects on where the LSD laced late sixties left off but booms them into a future – what was once an era of space travel is now an era of uncertainty and a different kind of psychedelic and their music reflects this as it spirals perfectly just in control sounding like a world turned dangle in a magical 45 minutes.

Bo Ningen are something else. For really long haired Japanese noiseniks who make outer space music that is beyond any rules and beyond any cliche. Their set is an astonishing rush through a multiverse of genres and ideas as baffling and brilliant as deep space itself. Three albums in and the band are cut and pasting ideas at a speed in a music that is psyche and prog and energised like punk rock with an acid punk like Rudimentary Peni once did that has been their staple since their 2010 debut album.

Frontman Taigen Kawabe somehow manages to play spider brilliant bass lines whilst singing at total counterpoint – his boney hand runs up and down the neck of his bass likes its got mind of its own as the band surge behind him. The high vocals never settle into one place but somehow float ethereally out of the music, somehow though giving the whole exploration a pop trip that is quite easy to grapple with and settle inside.

Like in deep space time means little and the band flit hypnotically from one genre to the next and somehow always manage to make sense of their exploration. This is no self indulgent trip but a thrilling rock band at the top of its game, a game which no-one else is playing. These are guitars reinvented for a future rock like Keith Levene once did with PiL and they sound orchestral as they spin deliciously out of control – sometimes delivering a crunching rhythm and speedy effects laden lead lines – sometimes it’s plane tripped out, sometimes beautiful, ethereal and always with that damn bass underpinning everything.