Home Blogs BMX Bandits are about to release a brilliant dark new album –... 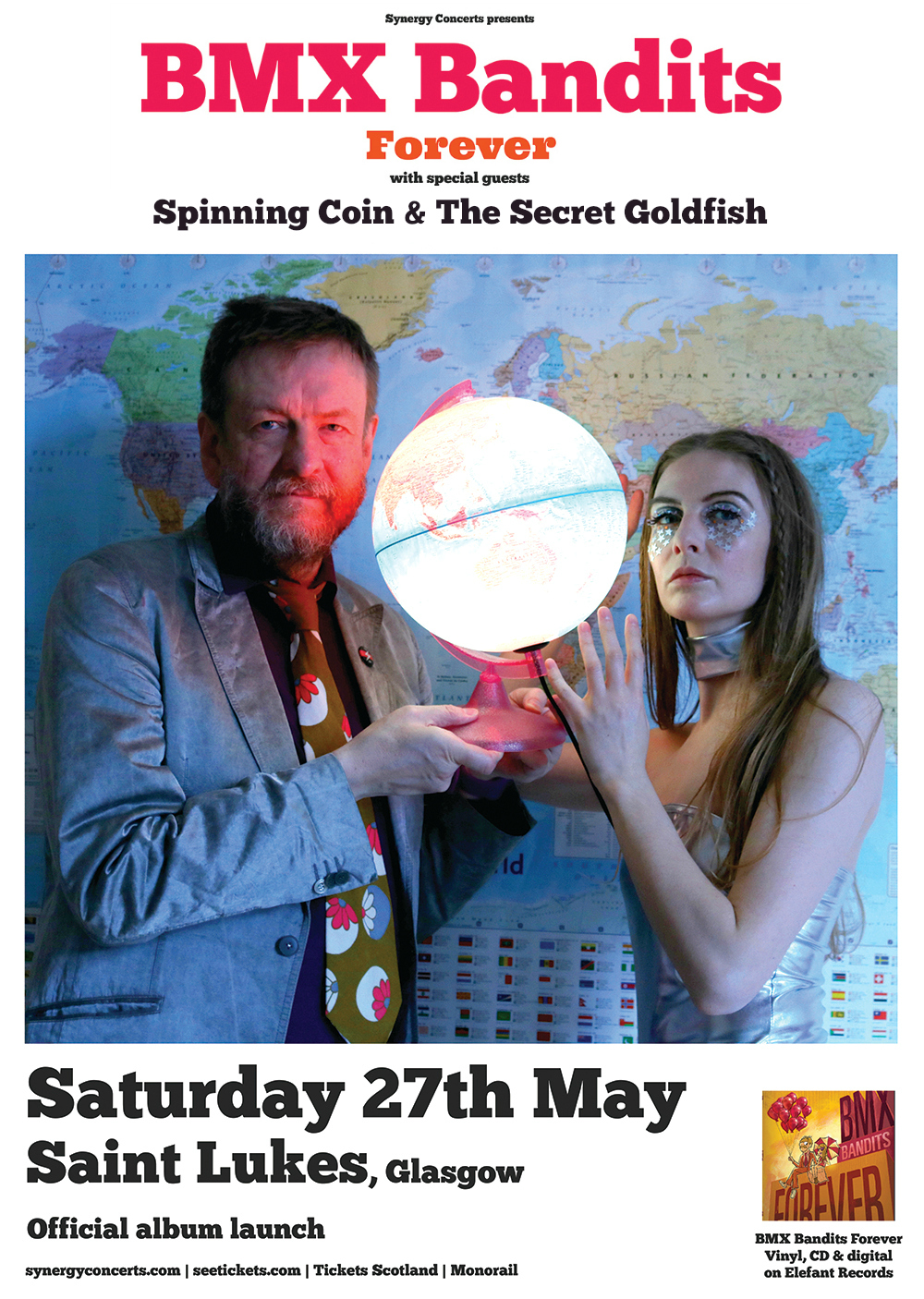 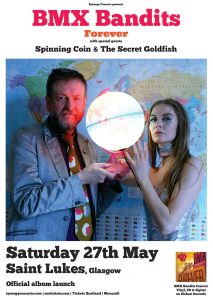 BMX Bandits are so much more than the Glasgow scene and Creation Records legends that they are. The band have also evolved into a magnificent beast with spectral soundscapes and ambitious music as on their new album BMX Bandits Forever.

‘BMX Bandits release our tenth studio album on May 19th. The album has the defiant title BMX Bandits Forever. It’s an album about love, loss, betrayal and my own mortality. I was both head and body ill during much of the making of it. It’s our darkest album so far but at the heart of it is an unshakeable belief in the power of love and power of music to heal and offer hope to even the most wounded soul. I want to share with you some of the music that helped shape this album. There are others I could have picked but these ones feel like they were big ones for us.

When I was a little Duglas every Summer during the school holidays the BBC would show a French TV series of The Adventures of Robinson Crusoe. When the BBC replaced the original French dialogue for English they also had to replace the sound effects and music. Thankfully they commissioned a new score and this music had a startling affect on me. I was about 5 when I first heard it and it made me feel sad but it was so beautiful and other worldly that I liked how it made me feel. I longed to hear it again and feel that way again. That was the first time I remember music affecting me so deeply and making such a connection with me. It opened the door for other favourites of my childhood which contained the same beautiful poignancy including John Barry’s Theme from The Persuaders and The Beach Boys God Only Knows.
When I started making tracks for what would become BMX Bandits Forever I re-listened to this incredible theme trying to figure out how it worked it’s magic.

2. Yvonne Elliman- If I Can’t Have You
https://www.youtube.com/watch?v=-pgJByML5xY

The first song we recorded for this album was the album opener My Girl Midge. I wanted to do a dancing the tears away song. The kind of tracks I had in mind most of all were two sung by Yvonne Elliman, both written by The Bee Gees, Love Me and If I Can’t have You plus Barry White’s You See The Trouble With Me, which I sang live on several occasions with a Glasgow pop supergroup called Disco Shark. I wanted that basic primal thing of dancing the tears away but I didn’t want it to be like a pastiche of these tracks I loved. I went to David Scott’s house with words, a basic melody, a few ideas for the structure and David brought his own magic to it, including a beautiful reflective instrumental mid-section. We got it on tape and mixed in about 4 or 5 hours. I thought at the time it might the last thing I would do as a BMX Bandit but I was wrong.

My love of European music by the likes of Serge Gainsbourg, Ennio Morricone, Michel Legrand and others had a major influence on this album. Gainsbourg has a lot of sex and humour in his music, which I like, but he’s also a master at capturing regret and a deep overwhelming sorrow. Two of the main themes of BMX Bandits Forever are loss and regret and so I naturally turned to Gainsbourg for guidance. This track about leaving a lover has such an incredible melody. I love how the guitar sounds on it and the rhythm track. Serge actually used a track of Jane Birkin’s real crying like a rhythm instrument on the track. Jane told me she had been upset as her eldest daughter Kate had just left to visit her father John Barry in England and so she was sitting sobbing in the studio control room. Serge noticed the percussive nature of her crying and also that it fitted the song’s story and so suggested they set up a mic to capture her tears.
Other Gainsbourg tracks that I sent to Stu Kidd my main collaborator on this album as points of reference were Requiem Pour un Con, Si Ca Peut Te Consoler and Sex Shop (one of the saddest most beautiful melodies ever, accompanied with a truly devastating lyric).

Often when I replay situations in my head they can almost become like little scenes out of movies of my mind. They often have their own little soundtrack accompanying them. Sometimes these little themes will develop into songs about the situations they grew out of. One song like this on the album is called Rust. I heard it originally in my head sounding a bit like something from the score of an Italian Giallo movie. Some of my favourite Italian composers have recorded some extraordinary, often very beautiful and poignant themes for these ultra-violent and sexy films.
I recommend investigating further the works of Ennio Morricone, Riz Ortolani, Nora Orlandi and Bruno Nicolai in this genre. Be sure to check out titles including The Bird with Crystal Plumage, Don’t Torture a Duckling, The Strange Vice of Mrs. Wardh and this one (above) by Nicolai. I wanted to use the music, the rhythms and sounds on this track to represent characters in the song’s story but also the increasingly unsettling, disorientating dark state of mind that I found myself in at that time. I sent Stu Kidd this track and some others as reference points the night before we recorded Rust.

Thankfully there were some lighter times along the way. I had an idea for a song that could be from a movie of my imagination. I imagined a movie that was based on my own love situation but in a very heightened way. It would be transformed into an early 1970s European sex comedy that was a modern re-telling of the Little Red Riding Hood story. I was a fan of the music that my friends Joe Kane and Stu Kidd had been making together as Dr Cosmo’s Tape Lab. I knew they would get the visual and musical reference points and the correct balance between humour and darkness. The song is called Way of The Wolf. After I sang my initial idea for this boy/ girl duet to Joe and Stu we listened to a bunch of Euro-pop from that era, including some of Giorgio Moroder’s early pre-disco Schlager pop work, a bit of Boney M from Nightflight to Venus, J Bastos’ Loop Di Love and a track by a girl trio called Luv entitled Trojan Horse. It helped us create a time and a place, a world for this song to exist in. For all of these tracks the visuals of the clips we found online were almost as important as the music in helping us paint the right musical picture.

6. The Beach Boys – The Night Was So Young
https://www.youtube.com/watch?v=N5yWU95Sp4g

I love Pet Sounds, it’s a masterpiece but it’s not my favourite Beach Boys album. It’s not the Beach Boys album that has had the biggest influence on what BMX Bandits do. That album is The Beach Boys Love You. It has had a major influence on every album we’ve made from Gettin’ Dirty onwards. Part of how we approached our re-working of Dennis Wilson’s Forever was to imagine it as on Love You instead of The Beach Boys Sunflower album. It’s influence is all though the album but especially on It’s in Her Eyes, It’s Time, Life Without You and Forever. I love how Brian used synths on that album and the directness of the songs. How he expresses this longing he’s feeling on The Night Was So Young with such tenderness and elegance was something we wanted to achieve throughout our album.

This is one of my favourite soundtrack reissues of recent times. It’s from a 1970s Czech movie based on the story of The Little Mermaid. In this version there is no happy ending, it’s a dark love story about a girl who loves so much she is prepared to risk everything and be destroyed for her love. I connected with the story and with this incredible music. It conjures up such emotions without having to see the pictures it was made for. When one is ill and when one is creating baths become a sacred time and place. During the making of this album baths would usually be soundtracked for me by this magical music. I feel like we’ve almost come full circle with this one. There’s something about the mood that reminds me of that magical Robinson Crusoe music from my childhood. They both combine electronica with classical instrumentation brilliantly and are packed full of that beautiful sadness that I just can’t resist.

BMX Bandits Forever is released by Elefant Records on May 19th. BMX Bandits play a special concert celebrating the release of the album at St Luke’s Glasgow with guests Spinning Coin and The Secret Goldfish on May 27th.