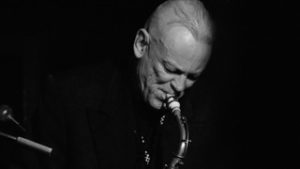 Louder than War’s Ioan Humphreys has a listen to the legendary BLURT’s latest live LP. This is what it’s all about…

In the 1980s BLURT were arguably the UK counterpart to New York no-wave and were once described as a pyscho-funk afro-punk fake no-wave pogo jazz trio. They have been likened to James Chance and the Contortions, though founder Milton has often ventured further into the avant-garde. The trio have survived more than thirty years of touring and released almost as many records.

BLURT exist in territories where free jazz and art rock coalesce in a punk format. The saxophone and vitriolic poetry surf on tribal rhythms and hypnotic guitar. An early Factory Records signing, BLURT was founded by the poet and saxophonist Ted Milton in 1989 in Stroud, Gloucestershire.

Nostalgic for the 4-track recording experience of BLURT’s first forays in Ted’s brother Jake’s ‘all roads lead from’-Stroud studio in 1982, it was decided, some thirty-three years later, that the band’s sixteenth album should be attempted in the even smaller (less than three meters square) Moriaki Skyway in London’s East End. Ted Milton (sax/vocals), Steve Eagles (guitar) and David Aylward (drums) created arrangements for the songs on the spot, so spontaneity was the order of the day. The only prepared element in the adventure was the lyrics which Milton brought along.

The resulting album was released in 2015 on Salamander Records. These songs were played throughout the latter half of that year, culminating in the show at Dalston’s Cafe Oto in January 2016, now to be released as an exclusive vinyl edition from Salamander Records, Live at Oto.

This sprawling 14 track album perfectly encapsulates the sheer ferocity, ingenuity and originality that are BLURT. Seemingly recorded straight from the mixing desk, the sound is crisp and each instrument is clear and high in the mix. The opening track has a funky, driving throb with insistent drums and Milton’s improve sax over the top. His otherworldly lyrics fill in the pregnant pauses and staccato guitar.

The second track has a rockabilly drumming feel to it, but the always present funk seeps through. The ever present demanding and yelping vocals lift the track as well as an almost ’80s electronica feel reminiscent of Cabaret Voltaire. Nice.

Afro-punk drums and a great guitar riff launch the third track and its then that you get the feeling that witnessing this in Cafe Oto, there was no way you could not dance to BLURT, you would have to be comatose. The funky drums and minimalist guitar riffs and stabs continue throughout the set with Milton’s freeform lyrics and sax playing being the driving force. At times the sound is almost nihilistic, but this is very welcome. A band that sounds like they could fall apart at any minute is ok in my book. In fact it’s essential.

As the set progresses, you get more funk, more pained vocals, feedback, raucous rocky drums and the fast and frenetic combined experimental poetry and sax.

And as the album comes to its closing tracks, you can almost feel the energy that must have been in the room that night. The last tracks summon up more rockabilly Billy Childish esque immediacy. More funk. More skronk and final track is a deliciously noisy drum and cymbal led affair that seems to revel in its cacophony.

BLURT’s legacy and continued contribution to the free form jazz/noise scenes from the ’80s to present day is unquestionable and invaluable. Along with The Pop Group’s latest output, they are trailblazers, innovators and this live document perfectly showcases BLURT’s abilities to transcend genres and musical tastes over 30 years and yet be perfectly situated to be the forefathers of the current experimental scene running throughout the UK.

As important now as they have ever been BLURT are essential listening for any student of noise and experimentation.