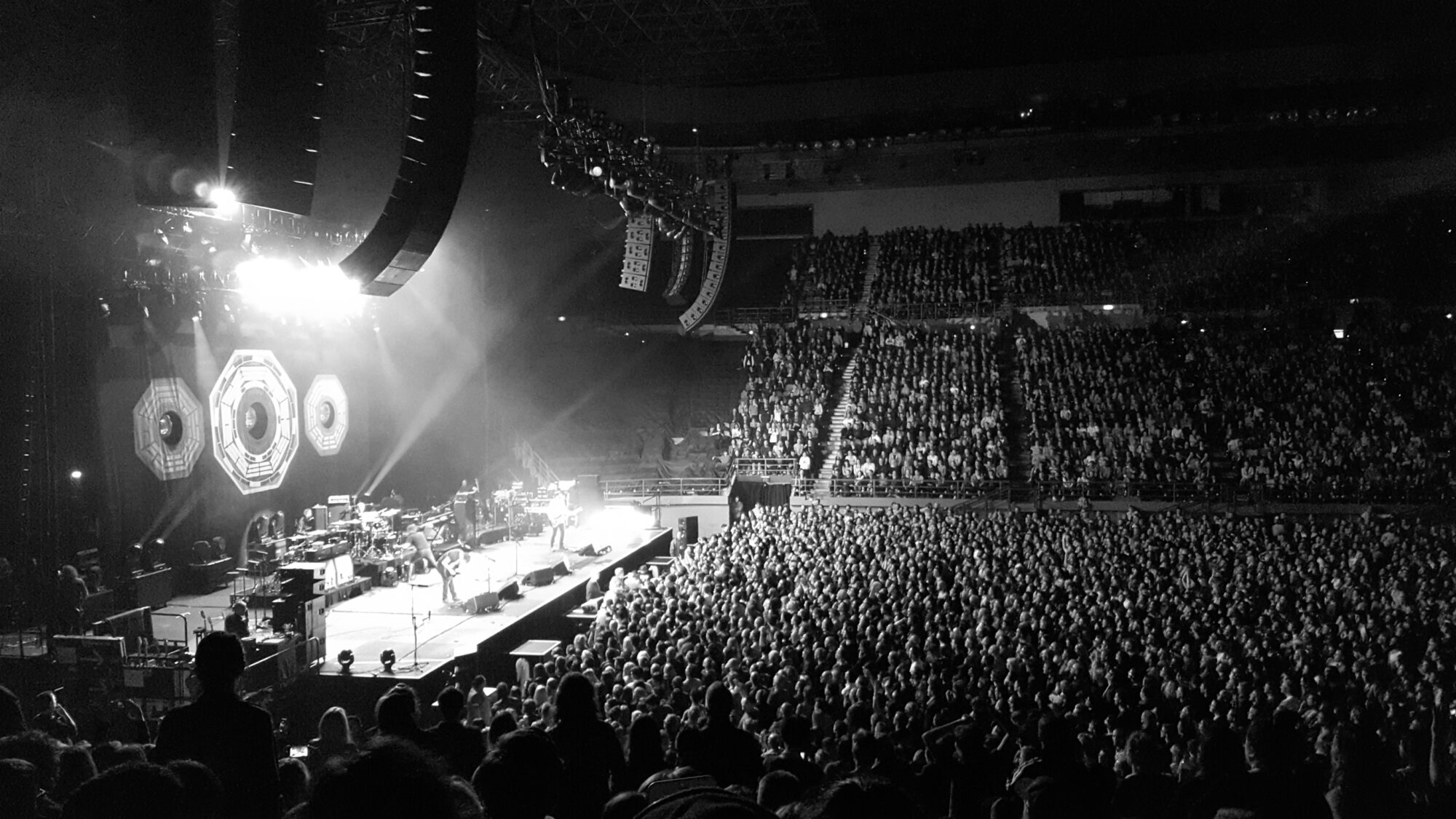 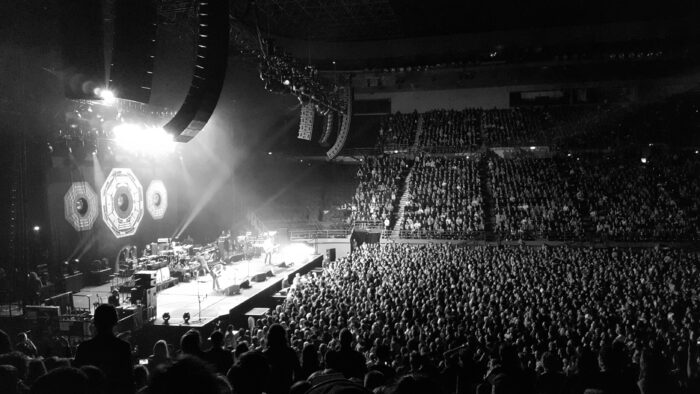 The chimes of an imaginary ice cream van serenade the gathering audience, anticipating the entrance of Blur – the band’s first live show in Melbourne since 1997. Meandering through several summertime kerbside classics, the sounds of the imaginary van (and the chants from the crowd) settle on a strange version of Teddy Bears Picnic before all sound is drowned out by a deafening roar – heralding the arrival of Dave, Alex, Graham and a particularly enthusiastic Damon Albarn. Photographers are left anxiously covering their equipment as Damon boisterously empties a succession of water bottles across the width of the standing crowd – not that anyone appears to care.

The Magic Whip’s ‘Go Out’ and ‘There’s No Other Way’ from debut album Leisure pack an immediate punch – thrilling the floor audience, who are already heaving. A lack of animation from the crowded tiers obviously frustrates Albarn, who repeatedly gesticulates at the seated audience. It’s still early though. Alex James’ studied insouciance reeks of cool.

The familiar strains of ‘Badhead’ from the Parklife album get an immediate reaction and Albarn propels himself into the crowd. Between songs Damon explains that while the new album appears to be very Hong-Kong-centric, many of the lyrics were actually written in Melbourne in December 2014. Just as the audience voice their approval he exclaims that “this one’s definitely about Hong Kong though”. ‘Ghost Ship’ follows. Perfect timing.

With a very chipper “Hi!” to the crowd from Coxon, Albarn is handed an acoustic guitar and the band launches into ‘Coffee + TV’. Apparently it’s a very popular choice with the audience and the band – there are dancers up from their seats in the tiers and horse play amongst the band, much to Graham’s amusement. The band have brought plenty humour to match their energy tonight. It seems that everyone is in a fine mood. The backing singers and the audience combine voices in a remarkably harmonious manner for the closing refrain. “You’re quite melodious aren’t you?” observes Damon. He retains the acoustic guitar for gorgeous renditions of ‘Out Of Time’ and ‘Beetlebum’. 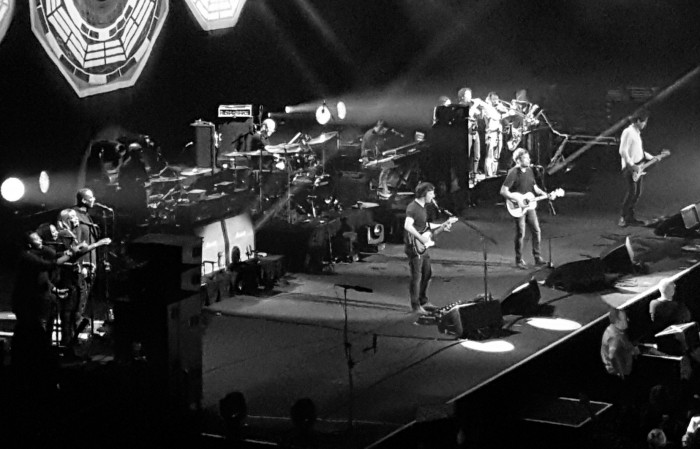 The gentle ambient intro of ‘I Thought I Was A Spaceman’ follows, with Alex taking a seat as disco ball illumination and trip hop sounds fill the arena. The song explodes into a thundering orgy of guitar, drums and synthesizer as Damon’s vocal’s make way for Graham’s. It is a magnificent moment – with a largely stunned crowd responding only as the outro segues into an earsplitting ‘Trimm Trab’. Thorough sensory overload. “Not bad for an old cunt!” exclaims Damon, followed by a dry exhortation to “excuse my vernacular”, explaining that he’s sure that we’re probably descended from that sort of vulgarity anyway. He’s really enjoying himself. We all are.

‘My Terracotta Heart’, with its beautiful pitch bending and an exquisite ‘Tender’ provide some quieter moments before ‘Trouble In The Message Centre’ has all of the audience on their feet. Several members of the audience are invited on stage to dance and an overexcited Albarn forgets the words to a verse of ‘Parklife’. It just adds to the mood. We’re all overexcited by this stage. The plats of the structure beneath the seats in my section are flexing and bouncing with the movement of the audience above. The place is quite literally shaking. Absolutely amazing.

The sing-along delight of ‘Ong Ong’ gives way to a predictably riotous ‘Song 2’. ‘Pyongyang’ soars, calming the energy of the room and Damon conducts the backing singers to a lengthened refrain, extending far beyond the point at which Graham’s feedback has ceased. Another wonderful moment. The disco balls are illuminated once again for a superb performance of ‘To The End’ followed by a colossal ‘This Is A Low’, that concludes with Damon wishing us all goodnight and Graham leaving an arpegiator and delay running to tease the crowd as the band leave the stage.

A very pleased looking Blur return to stage a short time later, with Damon explaining that the band want him to let us know that they are having a great time. This is a great gig. The atmosphere is joyous.

A four track encore follows. ‘Stereotypes’ is a surprise and comes complete with acrobatics from Graham – quite literally throwing himself into the performance. The stands shake again through the rough disco of ‘Girls & Boys’. The opening guitar chords of ‘For Tomorrow’ elicit a massive response from the audience, a collective nostalgia and sing-along with one of Blur’s finest moments before a stunning rendition of ‘The Universal’ closes the set. It is a breath-taking finale to an astonishing night.

Blur provided a superb performance at the Rod Laver Arena. As a friend later declared, “If we never see them again, last night was enough”.