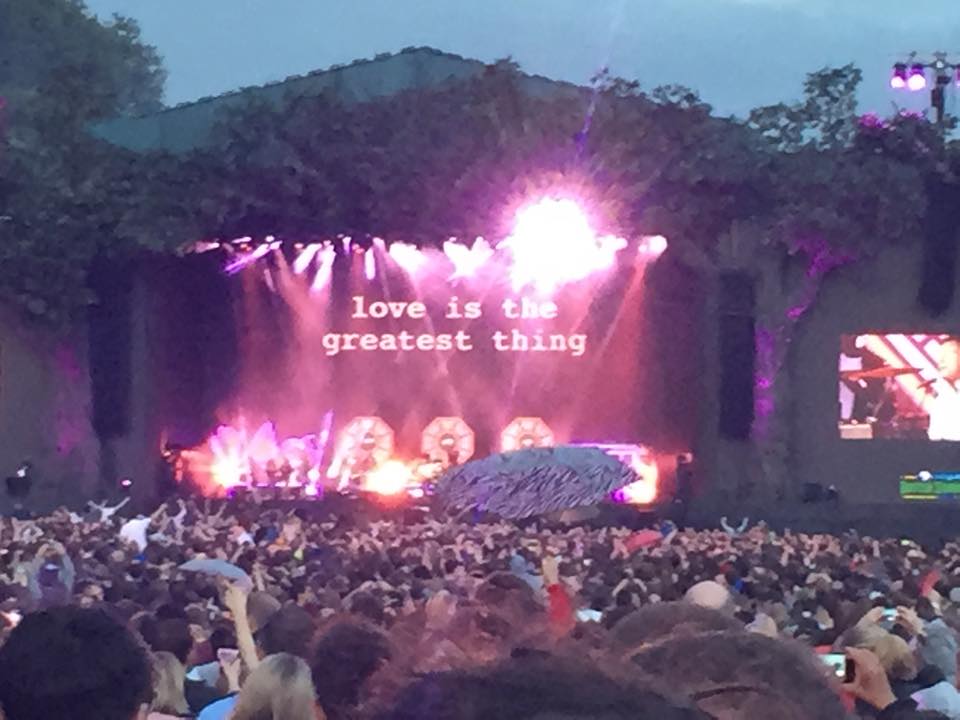 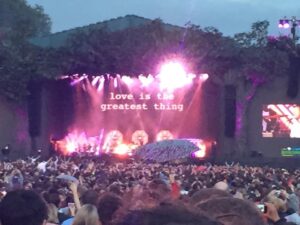 Blur take their turn in the headline slot at the British Summer Time events in Hyde Park, bringing out tracks from The Magic Whip and from across their back catalogue. We sent Features Editor Sarah Lay along to check it out.

Dark clouds scud across the summer sky and the tinny tones of an ice cream van sound across Hyde Park, calling us en masse to attention. It plays through the classics to ensure that in each of us our nostalgia and excitement are peaked before the band take to the stage.

Headlining Hyde Park for the third time since 2009 Blur will tonight play an eclectic set that sees them look relaxed as a band and hears them bringing a looser disco sound to their back catalogue. It’s a set that doesn’t delve too deep into Fan Only Favourites but contains enough surprises to stop it being middling mainstream.

Opening with Go Out, from latest album The Magic Whip, we get the churn, grind and bounce of classic Blur, the full throttle guitar fuzz building while Damon squares up to the crowd. It sets the scene perfectly for the assured performance that brings together the new tracks with those scattered across the back catalogue. This is a victory lap for Blur, a self-assured blend of pace and tone showing the consistency of the band through the years and across their styles.

The old are nestled between the young as There’s No Other Way comes up second and leads into Lonesome Street; The Magic Whip songs sounding deliciously new despite being so familiar.

As the set goes on, we start to get a few surprises thrown in. There’s nothing here that only a die hard fan would get but there are a few lesser-played album tracks including the Great Escape’s He Thought of Cars. Tonight it sounds majestically melancholy, the expanse and clamour of Hyde Park feeling a little more claustrophobic for its introspective stomp.

And from the arms-around-your-neighbour idealism of Tender we get a dramatic change of pace, a crunching gear change more than a juxtaposition, as Phil Daniels appears for Parklife. It’s a faster than usual, less of the jogging round and round and more of a sprint as the crowd pogo and shout along as if this song is box fresh and not two decades old.

And then Ong Ong brilliantly bends us into the final stretch; these songs of the violence inside exploding outward as shoulder charged mosh pits in Song 2 and beer-aloft sing-a-longs with the disco-slouched To The End.

The set official peaks with the statuesque This Is A Low, Blur at their most understated, melodic and grand. There is no need for the caricature of middle England here; this is the sound of the malaise of British culture, a sneering love letter.

And following that subtle punch the obvious encore starts with the shin kick of Stereotypes. The plughole swirl that leads us into cartoonish territory, but even this of-its-time track sounds victorious tonight. It’s followed by Girls and Boys, the disco setting turned up to 11, to get the whole park pogoing with paranoid ’90s love.

We end, as we always end, on The Universal. This dystopian vision detonated by the sheer euphoria of the soaring chorus, all our voices raised together in the hope that it really, really could happen, huddled round the collective comfort in telling ourselves that the days falling though us can be let go.

Tonight was a celebration of all that this band have done, a marker of what could yet still come. It proved that the recent tracks can stand shoulder-to-shoulder with the soundtrack of your youth and that this is a band that can parody themselves and the scenes they’ve passed through without ever sounding trite. This is a band who are at ease with themselves but far from resting on those laurels, a band who can create and roll out classics in the same set. For Blur, tonight Hyde Park was a triumph.

All words by Sarah Lay. You can find her on Twitter or read her other articles on Louder Than War here.