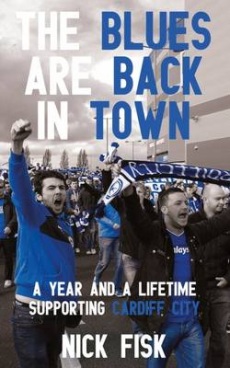 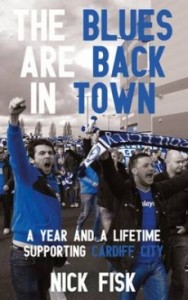 The Blues are Back in Town by Nick Fisk

The Blues are Back in Town describes a Fan’s eye view of the reality of modern-age football support. LTW’s Dave Jennings reviews.

Football as it is and football as the genuine fan still sees it are not always the same thing. In fact, the gap between the aspirations of the genuine (and I emphasise that word) supporter and the economic realities that are the engine of the sport is widening with each season. Louder Than War boss John Robb has written about the increasingly bitter feud between fans and the owner at Blackpool and my own club Wrexham are seemingly doomed to haunt the non-league for eternity. Nick Fisk has written this book from the perspective of a die-hard Cardiff City fan who offer one of the more bizarre storylines of modern football, and that is saying something.

For years Cardiff have been seen as one of the ‘sleeping giants’ of British football – essentially a club who can command huge gates if success arrives. A large city with one football club just itching for success. This was delivered recently under the ownership of Vincent Tan whose period in charge coincided with promotion to the Premier League. But what would appear to be a lifetime’s ambition of seeing your club play at the highest level turned into something of a soap opera as the increasingly bitter dispute between Tan and team manager Malky Mackay, who led the club to promotion, saw the latter dismissed for alleged racist comments. Furthermore, the owner decided that the team should forsake their traditional kit of blue shirts (hence their nickname of Bluebirds) and play instead in his favoured red, much to the consternation of much of the fan-base. Relegation back to the Championship ensued and it is the 2014-15 season following that is the backdrop for Fisk’s book in which he describes the impact on him of Tan’s actions as making him thoroughly miserable and physically ill. Clearly we have an author with a serious attachment to the subject here.

Fisk writes as only a true fan can of the small moments, he could not bring himself to wear a red santa hat for a Christmas fixture and purchased a blue one instead, but also highlights issues that are pertinent to many who regularly attend games such as the petty behaviour of stewards and needless police over reaction. A comment that struck a particular chord is the amount of debate that seems to be endless regarding tactics and formations, most of it ill-informed. Fisk yearns for the days when people had a couple of drinks and went along to the game without having to be jargon-spouting experts and who could argue if it led to an end to the interminable analysis we have to endure on televised games?

Alongside the fan’s view of the events of the 2014-15 season, music fans will be intrigued to find that Fisk also plays a central role in an infamous event at a Stone Roses concert in Newport. The Blues Are Back in Town is snapshot of the issues that result from colliding aspirations between fans and new age owners and a number of fellow fans will feel it strikes a chord with them.