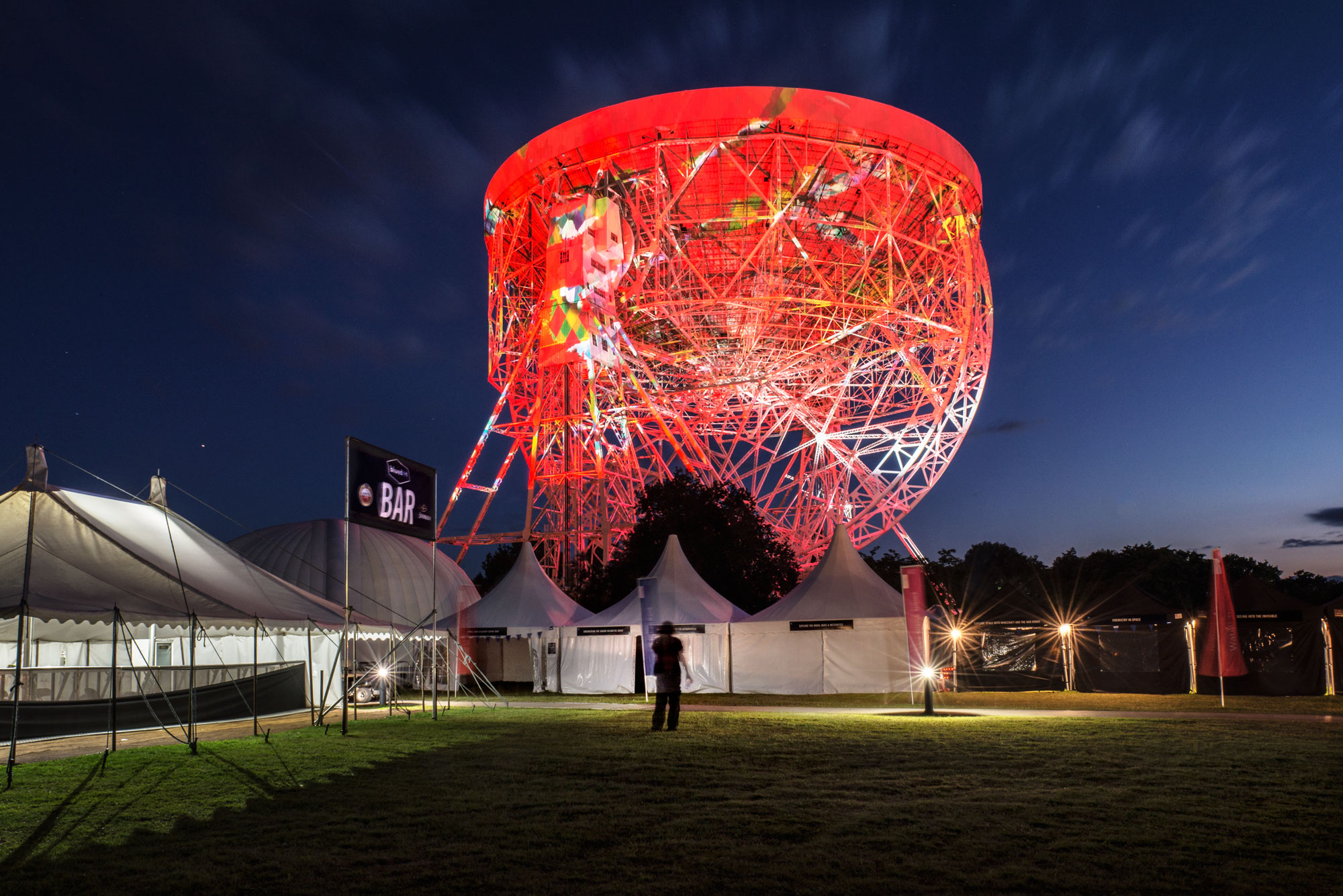 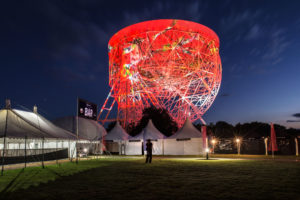 I hadn’t visited Jodrell Bank, home of the famous Lovell telescope for years, although I often see it as I travel about the north west. It’s a vast metal ear pointing expectantly skywards, yearning for communication from distant, alien life. But it never occurs to me to come and understand what lies behind that hope and endeavor. The inaugural Bluedot Festival gave me a reason to once again be brought back into its sphere.

“Explore, experiment, observe” was the edict posted on signs throughout the festival and, as I pitched my tent with a clear view of the white dish, it was impossible not to feel inspired and to embrace my sense of curiosity. 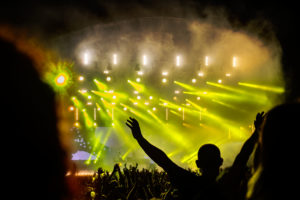 I launched my exploration in the Luminarium which, from the outside, looked like a giant, misshapen bouncy castle but actually, on the inside, was like entering the inner workings of the body. Tunnels and chambers drew you into a world of deep reds, blues and greens. Gentle music calmed the brain. Within minutes children who had charged in were subdued and quietly resting on the floor, gazing at the ceiling. We should insist that a Luminarium is installed in Parliament. If politicians were made to sit in such an atmosphere for 20 minutes before going to vote, we’d never have war. I emerged blinking into the light, sedated and in need of a large field in which to lie down.

Luckily there was one, home to the main stage that rested beneath the all-seeing telescope, and which was to have the astonishing Brian Eno light installation projected onto it as dusk settled into each night. I spent a lot of my weekend in this field watching music beamed out by acts such as Public Service Broadcasting, Underworld, Jean Michel Jarre and Caribou. The artists performed with such zeal that if aliens were ever to attempt contact it would be this weekend that caused it. 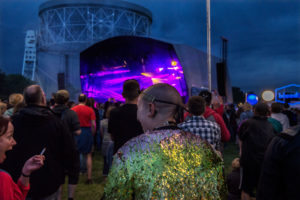 There were other artists on here that I’d never seen, but who I was glad to have discovered. Pumarosa in particular spun and danced and sang with such energy that people were lured from their picnics and earthly chatter, and drawn down to the front to dance. And in the surrounding tents I saw other performers for the first time, such as the extraordinary Lonelady and the charismatic Steve Mason, appropriately playing music from his album  Meet The Humans.

If we had been visited by extra-terrestials on any of these days, tempted by hearing musicians transmit the best of human energy and creation, then they would have encountered an eclectic crowd of telluric inhabitants. There were families, older couples, youthful ravers and the forty and fifty somethings, still determined to retain the zest of their younger selves. From straw panamas to sparkled space suits, the British at play were all represented in a delightfully eccentric mixture that caused a joyous mood to emanate from the thousands in attendance. 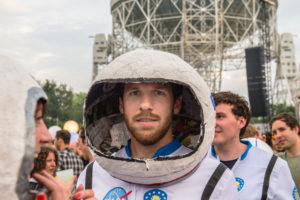 Away from the singers and musicians were talks and exhibitions that pulled and stretched the mind, delivering lessons for life. In one discourse on Mars, delivered by the TV presenter Dallas Campbell, an attentive audience heard a Carl Sagan quote “When we have strong emotions, we are able to fool ourselves”. My brain was put on alert after that and, well as building a rocket out of card, seeing meteorites through a microscope and listening to the noise a Slinky made via two pieces of string, I was also, by the time I went to sleep on Sunday, able to learn about bees, dark matter, and the future of the internet.

This melding of music and science was extraordinary. For respite late one evening, I wandered down to the Aboretum, where there was an installation entitled Outer Space. Here trees were lit in flowing colours and light projections cast ghostly shadows across the turf. A flame lit Orrery orbited our senses, and glittering constellations were laid out along the ground, inducing gasps of delight from beguiled observers. Some people simply sat in silence, as if overwhelmed by the beauty. It was how many people would, I suppose, imagine heaven. 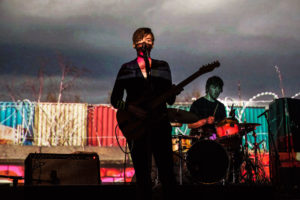 As I drove away at the end of my time at Bluedot, seeing garages, houses and shops seemed already peculiar. In the space of just 72 hours I felt as if I had, without doubt, been taken to another world. The event wasn’t without its troubles. However, if the organisers listen to any communication from their visitors, with the same dedication as the staff at Jodrell bank do listening out for aliens, this festival is one that is entitled to reach for the stars.