Louder Than War’s writer Fergal Kinney and photographer Melanie Smith went along to Bluedot, which is a three-day festival exploring the realms of music, science, technology and the arts. They report back in words and photos.

In 1958, the Radiophonic Workshop was born in a poky box room at the BBC’s Maida Vale studios. Their brief was to compound their understanding of music and emerging technology to create incidental music and sound effects for radio. What they ended up creating was something now understood as modern electronica. The previous year, work on the Lovell telescope at Jodrell Bank had just been completed – and though in a more socialistic time than ours, it drew the ire of many for its perceived out of control cost. Both the Radiophonic Workshop and Jodrell Bank were pioneers, and it’s a joy to see them both together at the 2017 Bluedot Festival – the second Bluedot festival following a successful 2016 inception. Bluedot boasts one of the most impressive line-ups of the UK summer season – big names like Orbital, Pixies, Goldfrapp and Alt-J share the same bill as serial Louder Than War favourites such as Moonlandingz and Warpaint. Kicking off the festival at 3pm was Meilyr Jones – whose ‘2013’, released in 2016, was Louder Than War’s second highest ranked album of the year. The luscious multi-textured instrumentation of that record may now be gone – Meilyr debuted a new three piece band, or ‘three piece suite’ as he described it – but it was enjoyable to watch the focus shift onto Meilyr’s abundant gifts as a performer and a songwriter. That, and a bloody impressive kimono. The highlight of Friday was undoubtedly Moonlandingz – the brainchild of Fat White Family and Sheffield’s Eccentronic Research Project, Moonlandingz could be one of the most dangerous acts in Britain. Instead, frontman Lias Saoudi was out handing crackers and biscuits the front rows as the set began. With Fall-esque glam rock drums, throbbing Krautrock and a heavy focus on synths, Moonlandingz are one of the best live acts in Britain right now. For much of the festival audience, however, Ezra Furman was the undisputed top draw – an artist finding his feet with a Transformer era Lou Reed stomp. Though Black Francis’ voice may lack the subtlety and vulnerability it had the first time round, Pixies’ headline set on Friday night was a whistle stop tour through their own back catalogue – with the new material they’ve produced since Kim Deal’s departure making every bit as much sense as the wealth of classics in their set. With a brief as a festival to explore the links between music and science, the spotlight on Radiophonic Workshop – and the Workshop’s female electronic pioneer Delia Derbyshire – was inspired. Manchester charity Delia Derbyshire Day held an impressively diverse two hour event that included an audio/visual reflection on Derbyshire’s career, a fascinating panel discussion and – crucially – a South Indian brass rendition of the Doctor Who theme tune. To have Factory Floor – who in 2016 delivered one of the finest electronic records of recent years in ’25 25’ – following Radiophonic Workshop was inspired billing, with the genesis and the thrilling endpoint of British electronic music rubbing up against each other. And while we’re here, it was great to see Jane Weaver performing tracks from ‘Modern Kosmology’, a real gem of throbbing synth-infused Krautrock. Over on the Contact stage, the quality and range of talks and discussions – largely centred on science and tech – showed real intellectual curiosity. An absolute highlight was the fascinating talk from James Ball of Buzzfeed, discussing fake news and the post-truth era in a clear, cliché free way. For me, the standout performance of the festival was Whyte Horses Experience on Sunday – Whyte Horses gigs are something of a rarity (there was one in 2016, this is their second and apparently last of 2017) though they could be one of the biggest bands in Britain if they wanted it. Their discord and sunshine jostle for space in a sound that brims with possibility – the only clear reference points appear to be French ye-ye girl singers, early Stone Roses and the sonic utopianism of Os Mutantes. Though the festival is still to find its feet in terms of nightlife – the range was slightly limited of what to do once the headliners were off – Bluedot 2017 was a real success and it will be fascinating to see where this festival goes in the future. 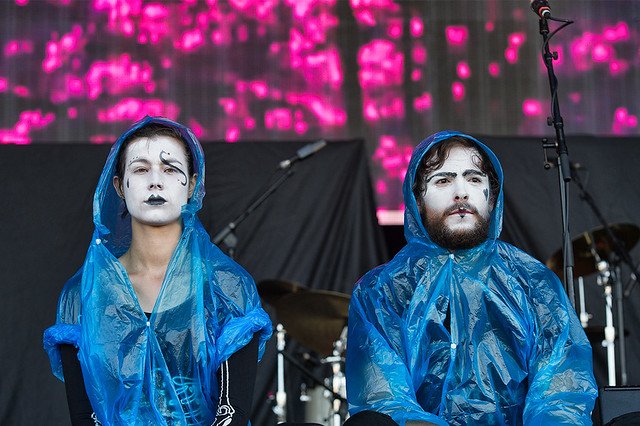 Check out Bluedot videos here read more about Bluedot and sign up for 2018 tickets here.

Words by Fergal Kinney, more work by Fergal can be found at his author profile.