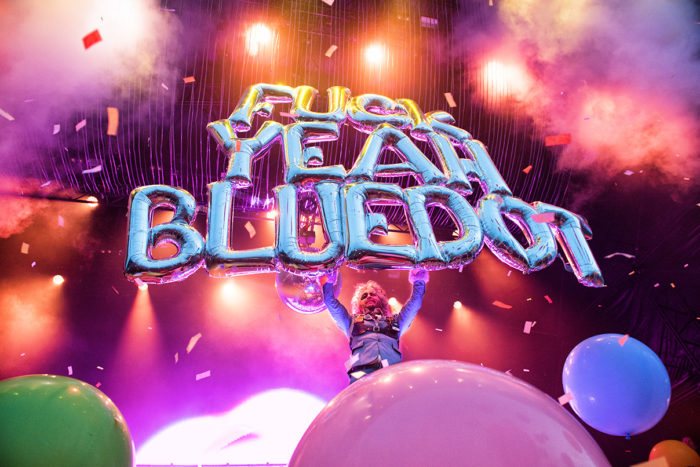 Louder Than War’s photographer Melanie Smith packed her caravan and launched herself into the sun for a trip to the family orientated Bluedot Festival, set in the picturesque Cheshire countryside, at Jodrell Bank. A weekend of music, science, exploration and art was in order.

A festival with a difference, it certainly is that, so aside from the music, dotted around are various art installations, the most notable being a most striking huge Earth by Luke Jerram, situated amongst the trees, in further fields there are huge glowing birds and stars, which all come to life and glow in the dark.  Like last year Dr Kronovator’s Fire Laboratory are once more doing all manner of tricks with fires (don’t try this at home kids).  We also had the nightly colourful carnival which parade around the fields after 11pm, (when the main stage is closed) with dragons breathing fire, florescent drummers, and strange otherworldly creatures. It’s all a very entertaining distraction for families who prefer to have some time out from the music and make this festival quirky. However it doesn’t all end at 11pm, the late night ravers are out partying with the DJ’s in the tents, banging out dance tunes till the early hours. 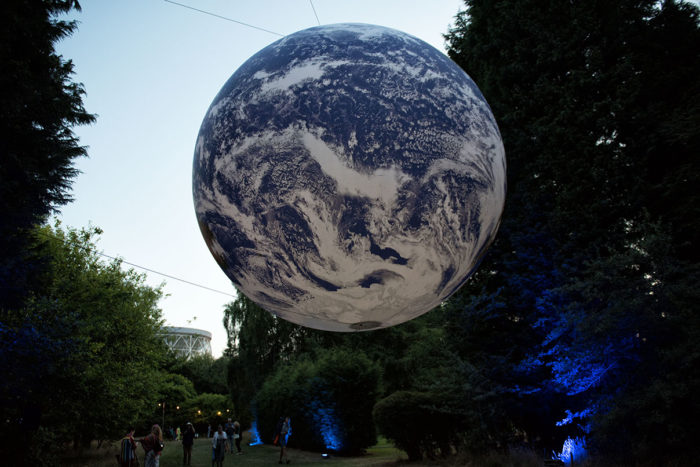 In separate fields or tents are workshops, stalls, lectures, interviews (Wayne Coyne  with Prof Tim O’Brien was a treat) and discussions, all with the theme of science, technology, space, solar energy and they are packed to capacity.  A mention must go to the Oram Music Awards ceremony (celebrating innovation in music, sound and related technologies by the next generation of forward thinking women) which took place on Friday, hosted by Elizabeth Alker (Radio 3 / 6 Music) and presented by Ana Matronic. The 5 winners were AJA / Georgia Rodgers/ Hannah Catherine Jones/Francine Perry and Loraine James. 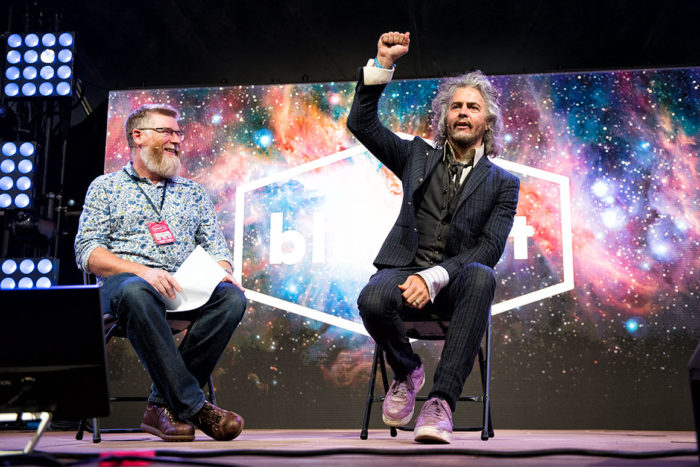 Now onto the music, which I felt sadly this year wasn’t quite as memorable as 2017 (review from 2017) when we had a lot of diversity, eccentricity and lots of different genres of music. This years music appeared to focus more along the dance, ambient and electro vibes route with a smattering of psychedelic. 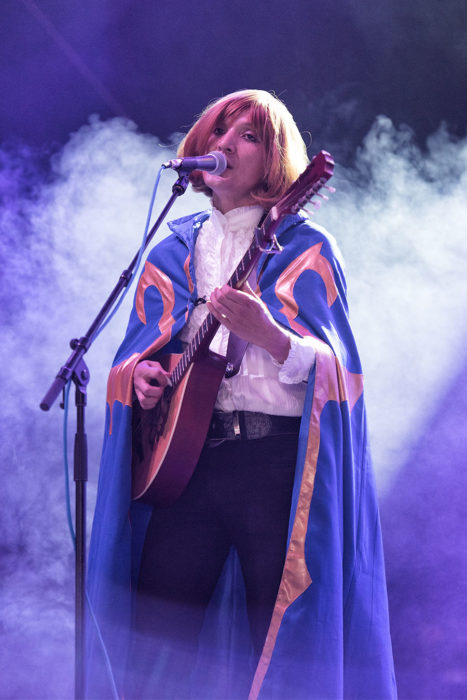 The highlights for me this year were without doubt The Flaming lips, absolutely a mind blowing, inventive show. How could they not fail to entertain and enthral us, it’s the first time I’ve seen Wayne in his huge plastic ball, walking over the crowd, singing Bowie’s Space Oddity. Gary Numan with his goth, dark industrial slabs of sound, which was well received by the Bluedot revellers. Nadine Shah is a powerful performer with heartfelt lyrics and pleased to see now nominated for a Mercury prize. Manchester duo Pearl City sparkled and shimmered on the Nebula stage, which left me thinking Bjork or MØ influenced, such a beautiful voice and stage presence. FEHM with their post punk tunes, reminiscence of the 80’s goth scene. International Teachers of Pop were a new discovery, a breathe of fresh air, infectious and lively pop tunes, which feature members of The Moonlandingzs. Acid Mothers Temple shook the Orbit stage to its very core with their brand of psychedelia and heavy drumming (despite having some initial technical problems). Sweden’s Little Dragon were amazing as they exploded onto the main stage with their unique electronic sounds, a much welcome performance with colour and originality. The Chemical Brothers duo Tom Rowlands and Ed Simons closed the show on Sunday night with an immense customised light show and visuals, and it seemed the whole of the arena were transfixed, if electronic dance is your scene this would have rocketed you to outer space and blown your mind to smithereens. 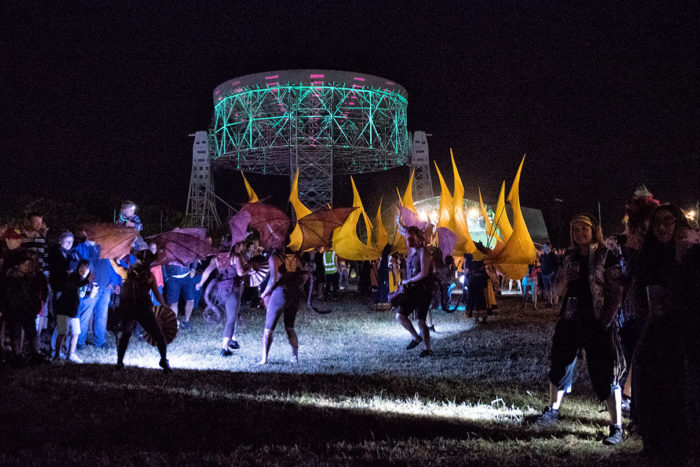 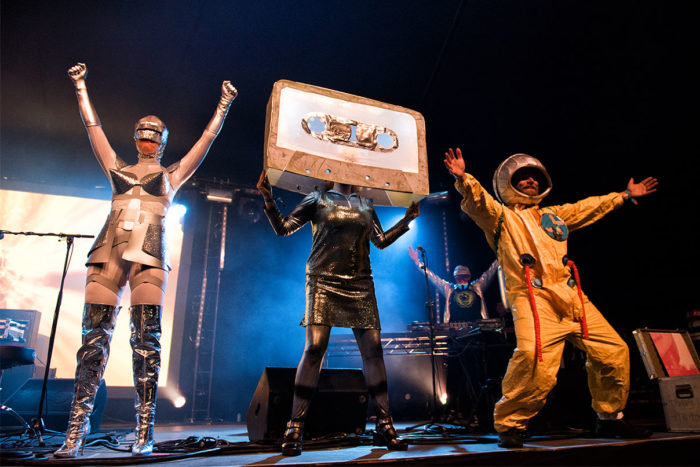 To sum up the weekend, in my view the music line up wasn’t as strong as last year, and I found myself hanging around a lot waiting for the bands I wanted to see/photograph. Of course you can chill in the sun, you can drink yourself silly in the VIP bar whilst dancing your ass off, stuff your face with the vast selection of yummy food (I was tempted), but for me it is all about the music. Don’t get me wrong it had its moments, some special photography opportunities and I discovered a few new bands, which peaked my interest. I do hope next year we will see a few more exciting diverse and unique artists and ones to watch out for. On the whole its a remarkable festival, there are no gangs of drunks, no trouble whatsoever, its clean, eco friendly and people are out to enjoy the whole experience in an extraordinary setting. We look forward to seeing the line up in 2019 and what other creative endeavours are in store.

“Look up at the stars and not down at your feet. Try to make sense of what you see, and wonder about what makes the universe exist. Be curious” Stephen Hawking

Words and photos by Melanie Smith (apart from Benjamin Paul – Oram Awards) . More work by Mel on Louder Than War can be found at her author’s archive. You can find her on Facebook and Twitter. Photography portfolio can be found here