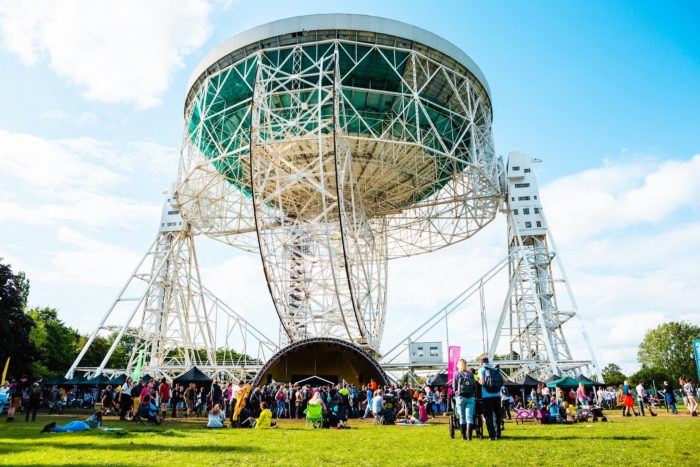 The nights may be late and the mud may be thicker, but nothing is stopping the team as they take in the delights of Bluedot Festival in the second part of the Louder than War review. Where we go beyond the flesh and into to the Computer World…

It’s a late night but an early start nonetheless as we head to Mission Control to see Katherine Joy from The University of Manchester talk about the exploration of the moon and the lunar rock samples and meteorites, though we are supping a Bloody Mary throughout to ensure we stay fully focused. Following that, we head across to the Extinction Rebellion Rebel Rebel Stage which is hosting discussions on creative ways to address the issues of climate change affecting the planet today. Though clearly preaching to the converted at a generally middle-class and educated festival, it is extremely heartening to see Extinction Rebellion with such a high profile over the weekend – on their own, with parades and with signs and models at the front of stages – which gives some hope that the tide may be turning in the battle for science and rational thought to combat ignorance, greed and the baffling denials and anti-science rhetoric towards “so-called experts”.

Manchester’s Henge are our first act up today and they are utterly tremendous. Genuinely one of the acts of the weekend. As close to an extra-terrestrial band as we see all weekend, they take elements of Sun-Ra’s Arkestra and marry it to a dizzying combination of prog rock, psychedelia, house music and techno. The result is genuinely head-spinning and devastatingly intoxicating, bringing a midday and hungover festival crowd to absolute delight and dazzling excitement. So many times bands throw everything at the kitchen sink and end up with an unbridled mess. Henge create something utterly unique, and truly sumptuous to behold. 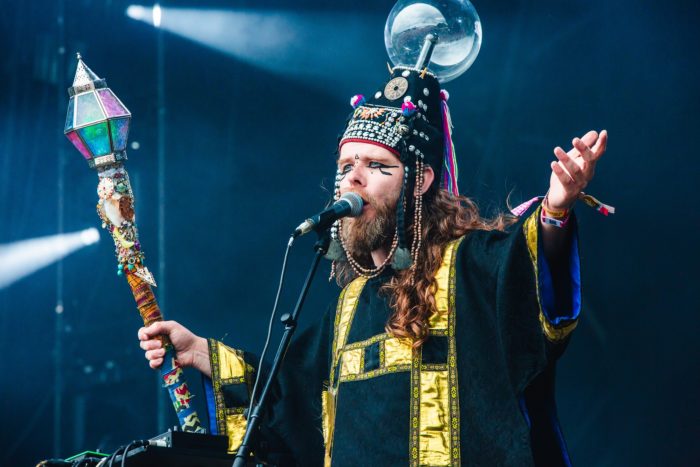 Tony Njoku’s Orbit Stage set is another delight. Fusing skittering electronic beats with his own elastic and multi-ranged vocal tracks he manages to make his music both cerebrally stirring and emotionally resonant. His songs have a glorious ability to split off in various directions before coming back together to ride towards their striking conclusion and at times almost developing a Hercules and Love Affair gallop and groove – all in comparatively short spaces of time. A one for bigger stages and bigger sets in the future.

Easy Star All-Stars’ shtick isn’t quite as unique as it was 16 years ago when Dub Side of the Moon went and blew our minds, but there are still few acts you would want to soundtrack a bright, warm afternoon more than them. In celebration of the moon landings they do the aforementioned album in its entirety but still keep enough time for their Radiohead covers (‘Karma Police’ and ‘Climbing Up the Walls’) and even a bit of The Beatles (‘Lovely Rita’). The truth is that their covers still are unique and bold enough to survive a thousand plays and in the confines of Bluedot, with such a terrific crowd, they are just sublime entertainment.

A beer, a stroll to the tent for supplies and a stotting cheese toastie later, we are back for The Physics House Band at Orbit, who cross Foals, Battles and Zappa-esque sounds into a delight for maths-rock fan and those who adore twisty, interchangeable time signatures. We then re-acquaint ourselves with Henge on a DJ set at Deep Space Disco where literally anything goes. But we cannot escape the lure of the music so we then find ourselves back at Lovell Stage for Jarvis Cocker with his JARV IS project. Which…is something of a mixed bag. His somewhat obscure (to the non-familiar) Pulp covers are great – a taut ‘Space’ and a storming ‘His ‘n’ Hers’ from their much-underrated 1994 album. Nor is it the new tracks. Lead single ‘Must I Evolve?’ is excellent. If anything for me, it is the lack of tracks from his excellent and criminally-ignored 2006 eponymous solo record, save for a storming ‘C**ts are Still Running the World’ at the end (dear lord, didn’t this seem like a bit of a giggle in 2006?). I eventually come to the conclusion that though it is brave to play a sizeable amount of new material, you risk yourself in a sub-headline spot when everyone wants to just be entertained. We were never going to get ‘Common People’, ‘Disco 2000’ or even ‘Babies’ but when the crowd expect they will do, they get bored. And they start talking. And then everyone gets restless. This is not any fault of Jarvis Cocker – it is the fault of us in the audience and expectations beyond seeing one of the most engaging performers of his generation playing, y’know – bloody good songs But regardless of cause or  blame, what should have been a firework ends up as a pretty, though temporary sparkler. 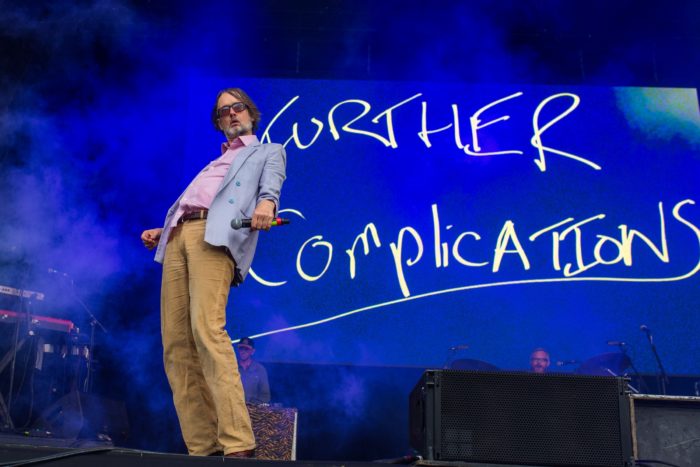 Whereas Kraftwerk take us up to the moon, beyond the stars and through the black holes of our minds. Four tables, four synthesisers. Four largely indistinct men, though with the clear and familiar figure of Ralf Hütter to the far left hand side. A huge screen and a series of unengaging grid patterns and unaligned laser beams. But that is until we put our 3D glasses on and the projections begin. And suddenly we are in another world. 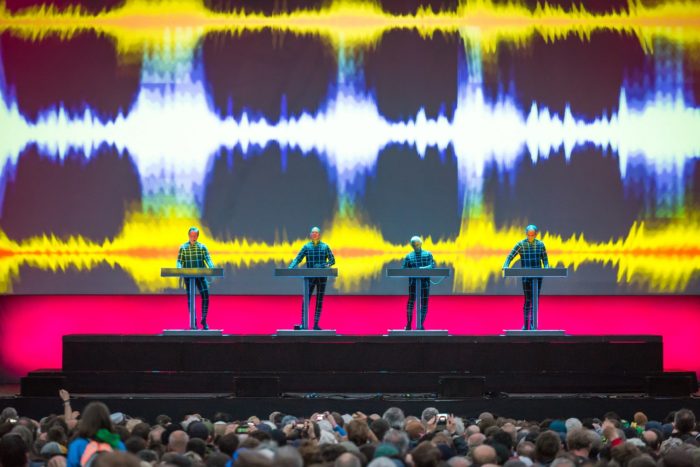 It is difficult to fully explain the mesmeric, hypnotic and transcendent experience that makes up the next 90 minutes. On one hand, this is a truly visual experience. ‘Autobahn’ plays out with 16-Bit graphics of colourful driving simulations. ‘Trans-Europe Express’ is stark and bold, with train tracks and monochrome engines shooting along endless tracks. ‘The Model’ explodes into our eyes and ears with 1930s and 1940s starlets from the Golden Age of Hollywood. And then the striking, battering rhythms of  ‘Radio-Activity’ are given a modern twist with stamped and stark words of ‘FUKUSHIMA’ and ‘CHERNOBYL’ stamped against international radiation signs. Every now and again something reaches towards you. A car, a hand, a flying saucer. But it never breaks the spell. Occasionally you take your glasses off to witness four nondescript men on the stage, then put them back on again and sink into the matrix. 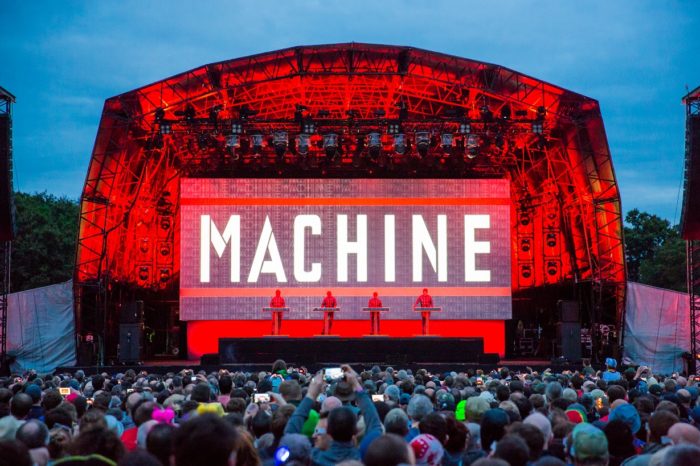 But the music. Oh god, the music. These utter pioneers of synthesised music and the modern sound of techno and electronica are not just revered for starting something huge, they are revered because the music still stands up to this day. The bleeps and rhythms: starting and stopping like the U-Bahn. The sound of computers, made to dance and to talk. The showroom dummies who barely move, barely eat and barely sleep. But know us better than we know ourselves. By the time the closing ‘Musique Non Stop’ hits we are dazzled, devastated and utterly captivated. This was one of the finest sets I’ve seen in years by a band who may be fractured and down to their remaining founder member, but who still have a dizzying and monumental legacy. As they close, each member from right to left slowly leaves their console, bows and departs to applause until only Hütter is left. He smiles, beams, bows. And leaves us as the final bleeps fade away. We take the glasses off and stagger somewhat. Bewildered by the audio-visual experience we have just witnessed, yet utterly alive and on another plane. This was music from the future, made in the past, yet utterly and profoundly relevant to the now. 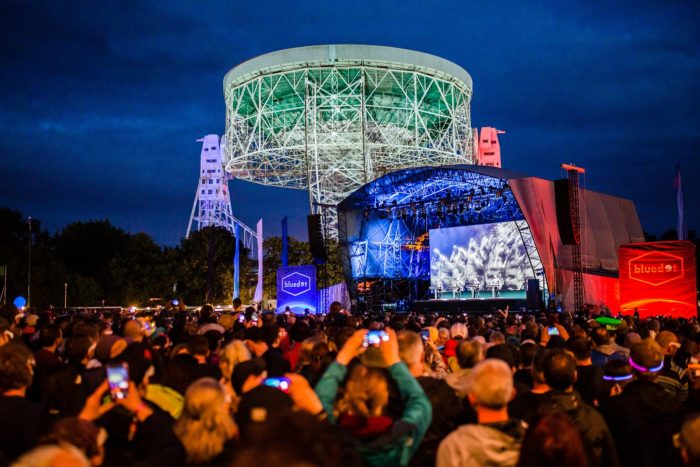 More information on the Bluedot Festival 2020 and early bird tickets can be found here: