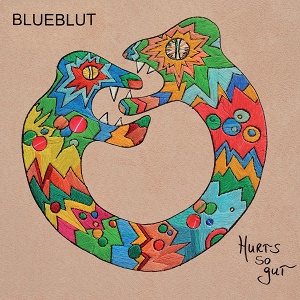 Hurts So Gut certainly isn’t one for the light-hearted. Kicking off with You Think is what can only be described as a cacophony of sound. A raw mix of post punk and experimental sounds and tunes which initially serve as the most effective wake-up call you could ever experience.

Described as a collection of ‘first time ever played one track takes’, Blueblut take us on an ear-splitting journey which you won’t forget for one reason or another. Following the album opener, Bondage and the epic Fuckhead Toothbrush (with a hookline not dissimilar to Ocean Colour Scene’s The Riverboat Song), the album holds much promise as being an album to delight and treasure. Unfortunately, it soon descends into a collection of improvisations which hold very little in terms of structure at all.

It’s a shame as the start to the album is quite incredible, but the unshaped, directionless tracks which start with Apocalypso are difficult to warm to.

The trio originally formed at Porgy And Bess for the Vienna Room Service Festival last year, liked what they did and stuck together. There’s no doubt that they ooze idea as children’s toys, horns, strange voices and enormous drum sounds combine in the unlikeliest of places.

Pamelia Kurstin whose past performance credits include David Byrne and Yoko Ono, contributes amongst other things, some quite amazing Theremin ‘playing’ for which she has become quite renowned. Verpratert and Calypsoma are lifted by the extraordinary skill and start to bring a little semblance to the album as it begins to close. A shame, as it’s almost too late by that stage after being subjected to tracks like noASMR which are fine to listen to once, but a second try is actually bordering on impossible.

Monkey Buh is short and energetic and maybe the key to wider acceptance for Blueblut is to keep things short. Calypsoma, as you’d maybe expect, takes a calypso beat and washes it with a certain attitude that you won’t have hard before and is probably on the of the albums better attempts.

Hurts So Gut isn’t easy listening, neither is it easy to listen to. It’s different, yes, but that doesn’t always make an album special.

The Blueblut website is here and they are on Tumblr here.