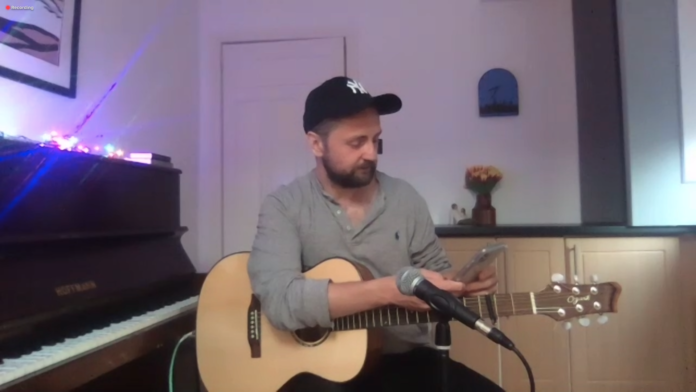 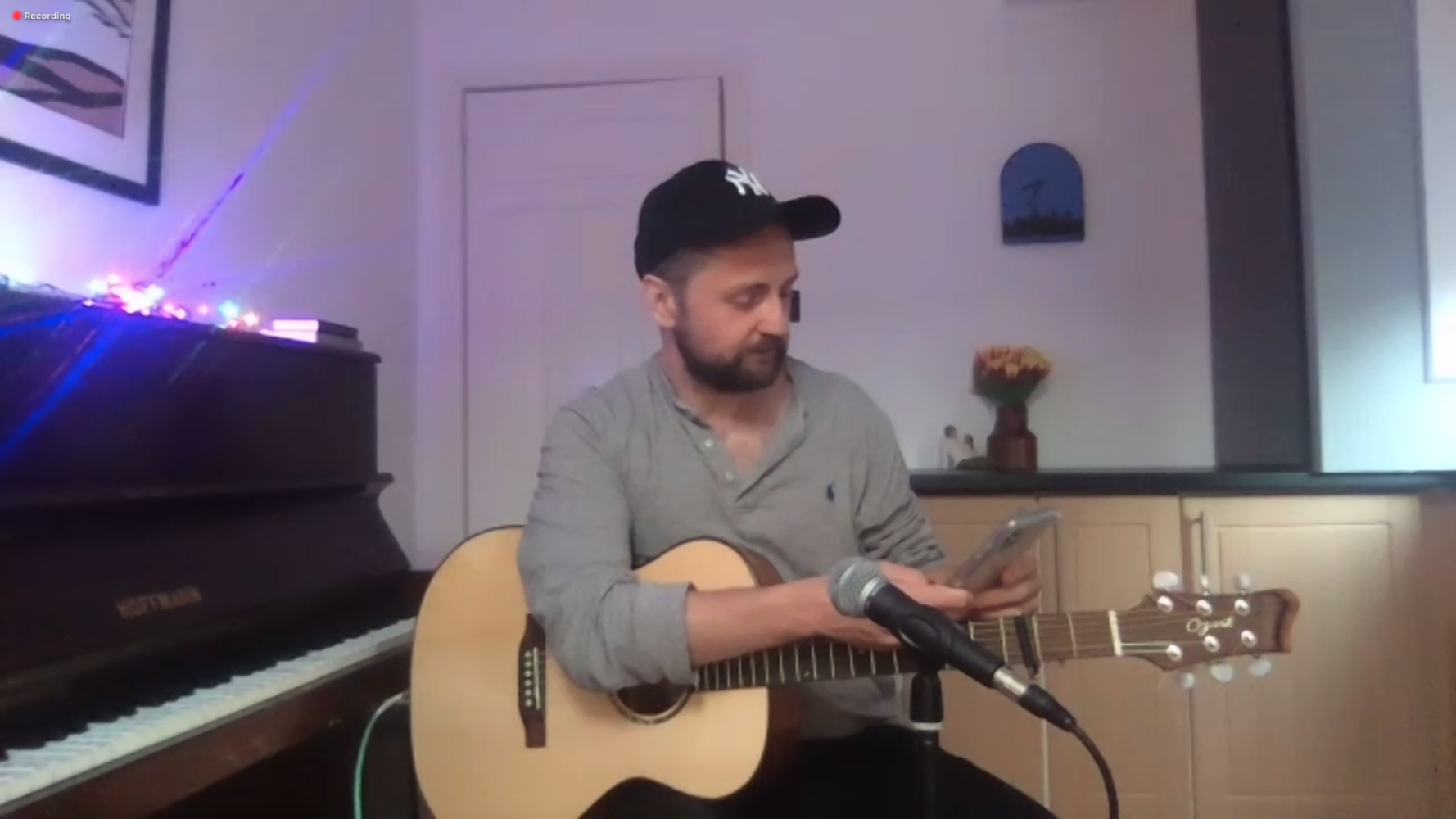 Blue Rose Code is the musical creation of the gifted and inspiring singer songwriter Ross Wilson. Ross has recently completed recording of the new Blue Rose Code album, and released a fabulous new single Starlit from the album. Ross’s music combines beautifully evocative songs with thrilling musical landscapes; and to help us journey through the lockdown, put on a live set for the Blue Rose Code community via zoom. Louder Than War were invited to join and review this exclusive set.

Playing in his front room in Liverpool, with an acoustic guitar, and piano decked in fairy lights, Ross played two sets, ranging widely across the musically diverse landscape of songs he has created. It is a very intimate experience to hear music in this way, and to connect with Ross and the community of Blue Rose Code friends from across the world, via the zoom technology.

The first set began with the new single Starlit, with the gentle guitar chords ringing out across time and space, and Ross’s voice effortlessly rising and falling with the emotional resonances of the song, and the beautiful line “…this world is not just what you see, its what you feel”.

Red Kites from the 2018 EP, played next, has an uplifting feel of wanderlust and possibility, with some accompanying choppy guitar figures, that push the song rhythmically, and to which irresistibly you want to move…even within the confines of your front room.

My Heart, the Sun, from …the And Lo! The Bird Is on the Wing album, is an early request, and sees Ross switch from acoustic guitar to piano. It’s a quite exquisite and poignant song of reflection, with a sense of unhurried space around the voice and piano.

A highlight of the first set has to be Ross’s revisiting of Skin & Bones from his first album North Ten. Ross explains that the song was recorded at the last minute for the album, and he didn’t think it was very good when he wrote it. It is a song that expresses quite wonderfully what it is to feel completely unconditional love, and with heart stopping lines…”And the way that you see me, I feel so blessed by your kind eyes”, and “…if you sing me to shipwreck at least I’ve no regrets”. A sublime reading of a very special song.

At the conclusion of the first set, Gavin Hastie who is doing a great job of compering and looking after the technology, un-mutes everyone listening, and the sparkling applause for Ross, connects and unites us, from the west coast cities of Liverpool and Glasgow, to Dublin, Canada, Italy, Portland (Oregon), and many more places across the world listening in.

The second set, begins with a haunting and intensely moving reinterpretation of Love, the first Blue Rose Code release, that came out on a London based indie label. If you have ever fallen in love, and are unsure if it is reciprocated, this song will touch you. Ross sings and plays it with such delicacy, and almost tentatively, with his voice soulfully floating and soaring. The guitar mishap part of the way through, just seems to add to the meaning of the song. 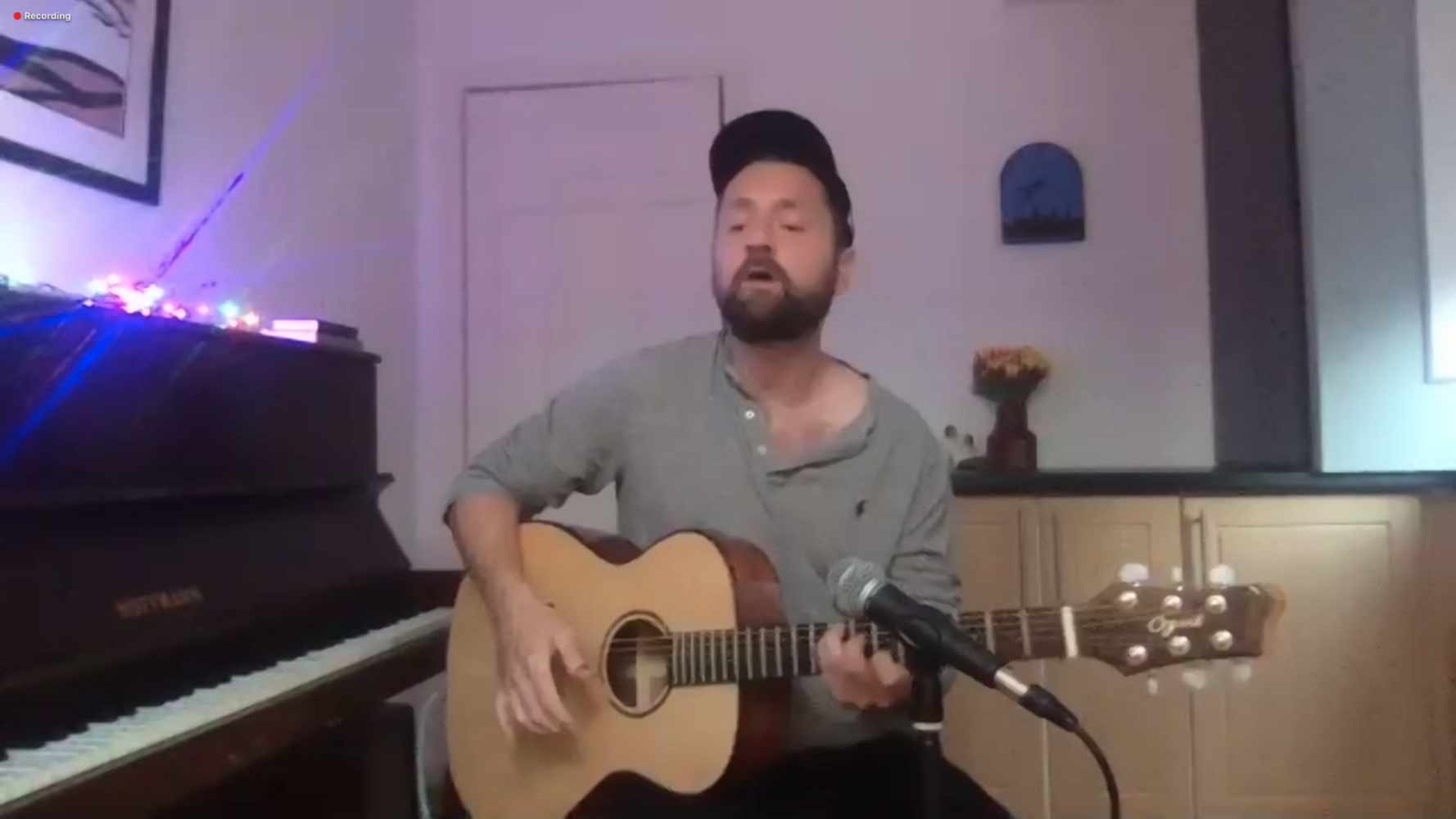 Pokesdown Waltz, is a deeply moving song of loss and endings, and one of Blue Rose Code’s most requested songs, with some lovely guitar picking, underpinning the sadness in the words.

Over the Fields (For John) from the Water of Leith, is a song written for the late great John Wetton, a friend and mentor of Ross’s. Check out his work with King Crimson, to fully appreciate how great a singer, composer and bassist he was. It’s a song Ross plays at the piano with great feeling and respect, with the fairy lights causing evocative shards of light to cross the top of the piano.

A lovely rendition of Edina from The Ballads of Peckham Rye, shines a light on the theme of place, that seems to imbue many of the Blue Rose Code songs. Place as a source of experience, sometimes damaging, sometimes strengthening and inspirational, and in the best moments, of connection, love and friendship, which we need more than ever in these unprecedented times. Ross and the music of Blue Rose Code feel absolutely relevant for these times, and how we move through them.

Ross dedicates his final song Grateful to the NHS and key workers, but also to all the “voiceless” people who keep the world running, while still struggling to make ends meet, with the hope that “we keep talking once this is over….we need to look again”. The traditional group photo from the stage at the end of the set is still possible, as Ross takes a photo of the zoom screen with his phone.

So a tremendous evening of uplifting emotional and creative connection through the great music of Ross Wilson and Blue Rose Code. A shout out to Robert Vincent, a talented singer songwriter, who guested during the second set, playing his song The Ending.

To end this review, a mention of the basis on which the gig was put on. It was a sell out ticketed event, modestly priced, that demonstrated that we can still support live music, in a way which ensures musicians have some income coming in. In these challenging times music prevails and speaks to our experience, and helps us to travel well, whatever is before us. We need to value musicians and live music, and support them.

All words by Gareth Allen, you can find Gareth’s author profile here