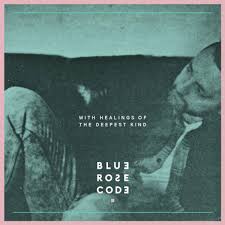 With Healings Of The Deepest Kind

In the follow up to 2017’s release The Water of Leith, Blue Rose Code’s Ross Wilson, provides a fully realised and musically sublime album for our times. The songwriting, musical settings, and expressive performance are simply breathtaking. With Healings Of The Deepest Kind is an album classic.

The album begins with a lovely spoken word introduction, wrapped in a late night jazz musical ambience, as the words “….with healings of the deepest kind” gently introduces the listener to the opening track You’re Here And Then You’re Gone. Here Ross’s unique and unmistakable voice leads us through a poignant reflection on the importance of treasuring relationships and love, reminding us that the moment is now. The line “You’re here waiting on your life to start” is a call to seizing the moment, and the accompanying ringing snare drum rhythm, sets off musical ripples through the undulating strings and cool trumpet phrasing, as if to emphasise the point.

The following track, Love A Little, Ross has explained was the last song he wrote for the album and also the first song penned in his new home town of Liverpool. It speaks of new beginnings and feeling able to love again, and has a lovely combination of piano, strings and pedal steel guitar, that creates a musically joyous feel, underpinned by the foot tapping country shuffle played by the drums. The string quartet that play on this album, and are so wonderfully present on this song, sound simply incredible, as if playing live in the studio. You can see a live rendition of Love A Little, here:

LDN City Lights, reveals another side of Ross’s musical palette, with a driving country and rhythm and blues feel. The fiddle stylings have a quite romantic timbre, and contrast with the stinging and quite awesome guitar breaks, which can only be the work of long time collaborator Lyle Watt…he is that good.

The Wild Atlantic Way opens with a wash of sound that has echos of the great Miles Davis and Gil Evans on their Sketches of Spain opus. A lilting accompaniment of piano and strings follows, sympathetically supporting the sense of new life and yearning in Ross’s voice, with an expressive saxophone solo that literally flies out of the speakers. The song also has that quality of place that often characterises Ross’s most impactful songs, where you can almost feel the elements of nature blowing in your face and the land beneath your feet.

It is apparent very early on in this album, that Ross is embracing new musical settings, and deep lyrical themes, that speak to his growing maturity and ambition as an artist. His music and words invite us to heal together and embrace new horizons with openness and a dynamic sense of hope.

In the forthcoming documentary about the making of the album, This Time Around, Ross talks movingly about the journey to make this album. Talking with great courage and openness about the struggles with his mental health, Ross shares a message of recovery and how excited he is for people to hear the album. As he says in the film, “Connection is the solution for everything”. Without doubt, With Healings Of The Deepest Kind, has been worth the wait.

An album highlight is Starlit, one of the singles taken from the album. It began one of the recent Blue Rose Code online concerts. The concert was reviewed by Louder Than War, where we described the performance of the song: “with the gentle guitar chords ringing out across time and space, and Ross’s voice effortlessly rising and falling with the emotional resonances of the song, and the beautiful line “…this world is not just what you see, its what you feel”. Here this charming song, is further enhanced by the intimate playing of strings and piano, that feels quite mesmerising, and allows full expression to the cadences and soulful phrasing in Ross’s vocals.

Riverstown, that closes the album, is Caledonian soul embodied. Think Van Morrison at his most soulful on the It’s Too Late To Stop Now live album, and you will have some idea how good this song is. The swinging mix of interweaving instruments effortlessly carries Ross’s voice skyward. It has a soothing quality and groove that will literally light you up inside as you listen.

Ross and Blue Rose Code create music that is like a soundtrack of hope, as we reach again for the light, and a sense of possibility. Quite simply thank you Ross for this great album.

You can find out more about the music of Blue Rose Code here: