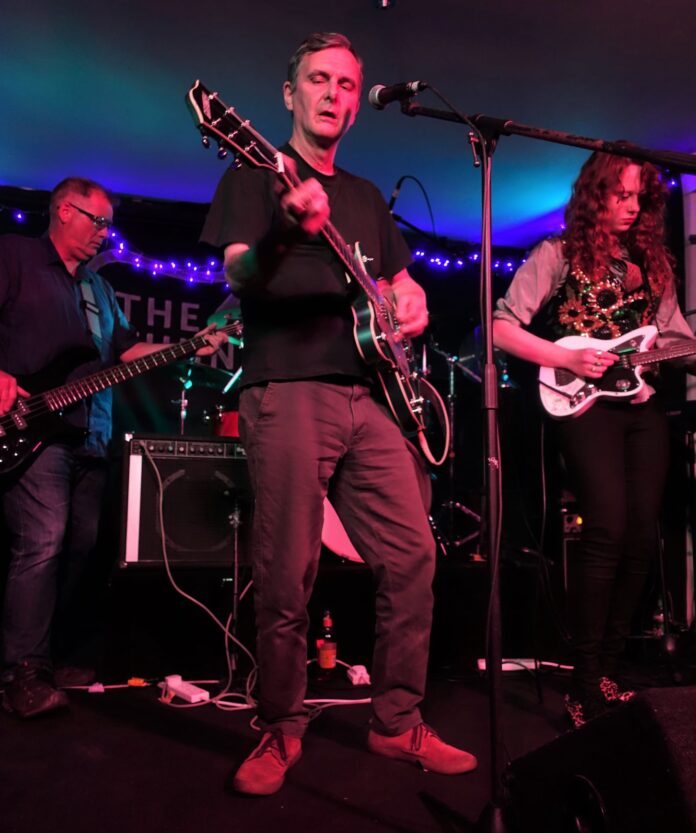 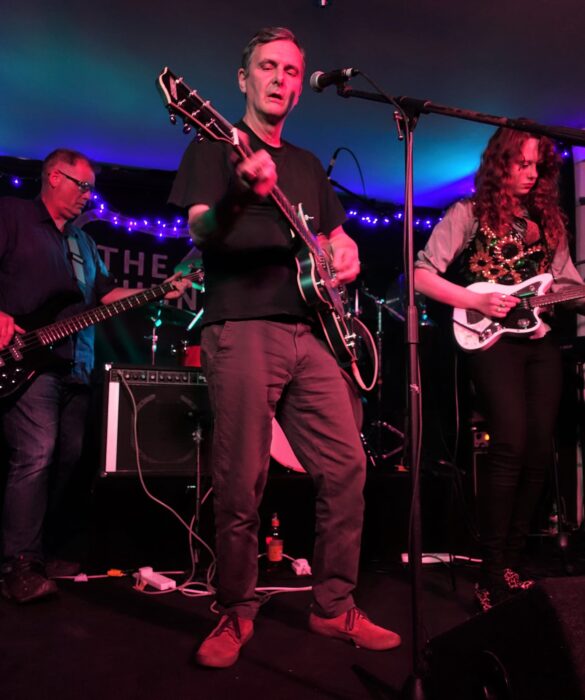 First visit to the Thunderbolt and Ged Babey’s first gig for seventeen months, since lockdown, self-isolation and life-lived-online. A triple bill of his most-favourite bands. Six hours of meeting cult heroes and glorious music at the perfect small venue left him grinning from ear to ear and emotional.

God I needed this. Such a great night… I literally cried.

I don’t particularly like the way some rock writers posit themselves at the centre of the narrative. Like Kris Needs, hanging with the bands and banging on about it endlessly.  But, I’m afraid, that is exactly what I’m gonna do here and now, because it was part of what made this a special night for me.

Jane Barnes of Bizarro Promotions
Jane is a force of nature. She organises tours for the Monochrome Set, Blue Orchids and other bands of the same ilk and vintage for pleasure, rather than money. An uber-fan turned fixer & tour manager she is a heroic figure. Tonight she is beaming. Hometown gig and everything running like clockwork. (Mess with her though, and she is ferocious) She is pleased and surprised to see me, knowing I rarely leave Hampshire.

The bands
All three bands had such distinct, slightly odd identities of their own – and it fed into their music and performances – which were great! Brilliant night.   (Hazel Winter)

Blue Orchids have a quadrilogy of utterly brilliant studio albums released over the past six years: The Once and Future Thing, Righteous Harmony Fist, the Magical Record of.. and Speed The Day. Live, they are arguably better now than they’ve ever been.  Martin Bramah visibly enjoying himself now he can concentrate more on singing with new member Tansy playing a lot of the lead lines on electric ukulele…  It was great to walk into the venue to be greeted by him, although I successfully avoided him for the rest of the night in true never meet your heroes fashion. Or at least I thought so until a ‘selfie’ with him and AlterModerns appeared the next day. 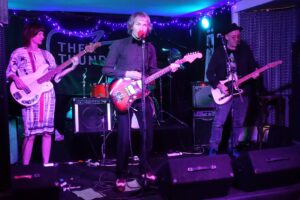 Micko & The Mellotronics I have followed from day one. Micko is a charming English eccentric and his band has a talented and beautifully motley crew. Their album is a favourite with at least four LTW writers – they are a band who deserve much more than cult-heroism.  With his bow-tie he reminded me again of a potential Doctor Who. (He acted in Velvet Goldmine after all). Like all thespians he name-drops constantly. he can’t help himself.

“I gave Tom Baker a bicycle bell once. He rang it and said ‘Now you can hear me when I’m coming!’ with a wink and gales of filthy laughter”

Having only had one practice session with the Mellotronics since lockdown he was nervous. As it turned out they gave a great performance of tense, wiry, intelligent art-rock brit-pop. Jon Klein, an extraordinary guitar-player and the band is intuitively tight.

Third on the bill, the only band I hadn’t seen before, were AlterModerns. A couple from Brazil, via Italy and Wales, now settled in Bristol. Ananda on drums and vocals and Glauco on guitar and vocals.  Beautiful, crazy people who speak in what he calls ‘dirty English’ as it is not their first language. They play punk-rock garage-psych and are the best new band I’ve seen for a long time. 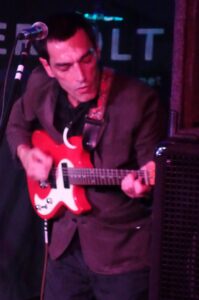 Meeting them was an absolute pleasure. They look like models or film stars with sharp cheekbones and alternate between moody pouts and beaming smiles. It’s rare to meet people who are so (to use Rowland S Howards word) auto luminescent and charismatic.

They have an album recorded and plan to make a 45 minute film telling their story, mixing fact and fantasy.

The Thunderbolt, Bristol
Without a shadow of a doubt, the best small venue in England. (Previous winner: the 12 Bar in Soho). Beautiful old building, great PA, nice garden, lovely staff and an owner who really cares about the music. And a clientele who step in and donate thousands when the government arts council don’t during the pandemic.

Meeting people
Like I said, the night was unforgettable for me as I met people from bands I love (Hazel Winter and Gerard Starkie -from Flux Capacitors and the Jesus Bolt who kindly put me up for the night) and people from bands I hadn’t heard – the brilliant Steve Miles (from European Sun).  Even nipping out for a cig I was cornered by Steve Bush – from 1979 Bristol cult heroes Essential Bop and currently Bush & Fey.  He knew Jon Klein from his days in Avon Calling band the Europeans (prior to the Specimen, Banshees and Mellotronics) and was singing his praises.

As an outsider Bristol seems to have such a wonderfully friendly community of talented, underground bands who, older and wiser, leave rivalry and bitchiness behind them. (Then again, if I lived there, I’d probably find some!)

AlterModerns just look so cool before they play a note. Ananda drums stood up in a strapless dress. Glauco holds his guitar high up (like Rob Symonds from the Fallen Leaves) with his good luck charm, a crescent shape claw, around his neck. 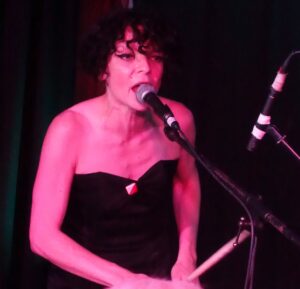 Like all good duos they sound like a full band and play fast and loose. It is a dirty garage rock sound one minute. Then pure punk rock and swirling psych the next. Sometimes all in the space of one song.  Ananda sounds like Nico at times – the heavy accent.  Glauco and her make eye contact at every vital change in pace. He sings too, sometimes alone – sometimes both of them. They are just a joy to watch.

They sing about ‘lived’ politics and frustrations in life but in such a way that it makes its sound like a positive affirmation – and how the struggle can be beautiful and full of passion.

When mentioning ‘fascists’ in one song, whilst frantically strumming, Glauco still finds space and time to raise a fuck-you finger to them, without missing a stroke of his six-strings. A beautiful second in a raw but faultless performance.

Best new band in the country?  I think so.

Micko and the Mellotronics have the vibe of the young Talking Heads onstage – only playing an English version of mod, pop, psych, glam – and songs that are analysing human behaviour and failure to communicate. Psychically located in Leeds and London, the mid-80’s and the now, there is so much to unravel about their work – but they are a straightforward fun and interesting band to watch live.

Blue Orchids set was just transcendental.  Perfect song after perfect song. Morans keyboard melodies, Tansy’s electric ukulele and the solid but subtle rhythm section all mesh and bob and weave… Bramah is imperious and majestically ordinary, the captain of the ship, singing better than he ever has and raising his guitar high at each climax.

‘What wrong with my shoes?  You… Punk!’ snarled Martin as he took the band and audience on a trip to the 22nd Century…

It was the circumstances and the people which made this the single most memorable and enjoyable gig I’ve been to for a long time…. But, if it wasn’t for the music they all make – which brings me immeasurable joy to listen-to and write about, then it wouldn’t’ve happened.  A heartfelt thanks to all the bands for making art that lifts my soul and to Bristol for being the coolest city in the UK.

‘My life was saved by rock and roll’.

All photos and video courtesy of Jane Barnes.

Special thanks to Starkie & Winter. x

Fri 29 October 2021 The Band Of Holy Joy plus Stuart Moxham, Helen McCookerybook and I See Islands