Home Best of the Web The Blue Monday Diaries: In The Studio With New Order – Michael... 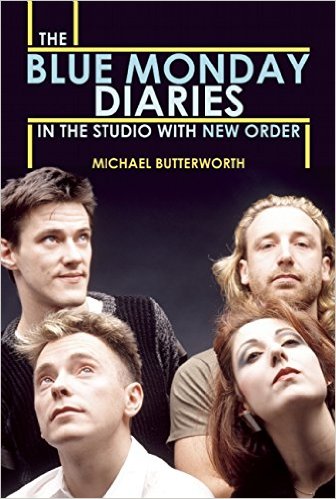 Michael Butterworth, a prominent writer and publisher who once enlisted Geoffrey Robertson QC to overturn the ban placed on Lord Horror the book he co-wrote with David Britton, was also a fixture on the Manchester scene. He was ideally placed as a close confidante of New Order to write about the recording sessions for their second album Power, Corruption and Lies and the enduring single Blue Monday and only now has his diaries seen the light of day. The legions of New Order fans will, be glad he has however as the insight provided is an invaluable addition to the history of the band.

This is a minutely detailed account of some precious moments in musical history and also some more mundane realities. For instance, one minute we read of Butterworth’s concerns regarding childcare, the next we see him preparing to visit the newly purchased hideaway of Adam Ant. We also find that, quite ironically, Gillian Gilbert objected to the term ‘dance’ being used to describe some of the band’s music in a press release, but as none of the other’s did it stayed in.

November 1982, a very musical reality existed at the time than is often re-imagined today. It’s gratifying to read that I’m not the only one who would feel the need to stress a love of early Adam and the Ants rather than the New Romantic piffle that was being peddled around that date. That is a particular strength of this book – it comes without any modern cheerleader’s perspective, it’s just a record of events as they happened, not all vital to the emergence of the album, but any of which the New Order completist may find invaluable. Nobody needs telling how successful Blue Monday and New Order became but if you’re interested in a detailed eye-witness account, down to sourcing the band’s drugs, you’re in luck.

We read about the rising times of individual band members and the films the band watched and how some of these filtered through to the music. Barney developed a habit of wearing a lab coat in the studio and yearned to make music completely spontaneously in the studio at one stage. Maybe one of the most revealing insights is when Barney is asked about the extent of influence the Sex Pistols had on the band. He replies that they were the only recent band to inspire ordinary kids on the street that they could play and could make it if they had talent. No need for big record companies.

In the analysis chapter at the end, Butterworth pinpoints the first American gigs played by the band in September 1980 when they identified the future electronic direction for their music. Already fans of this genre through Kraftwerk, they saw the popularity of it in clubs with a range of clientele and this was apparently as inspirational as their visit to the Lesser Free Trade Hall to see the Sex Pistols in 1976.

As Butterworth states, this period is crucial in musical history – he calls it “the cusp of two eras (post-punk and dance) but also stresses the spark of creative genius required to ensure success. The Blue Monday Diaries is invaluable in helping the reader to trace the genesis of this creation.