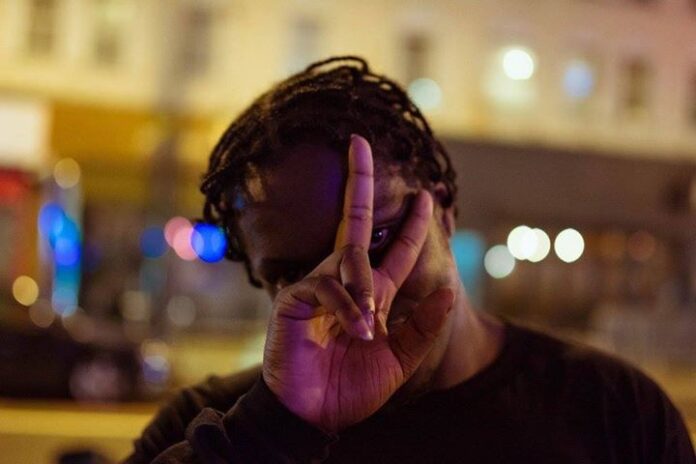 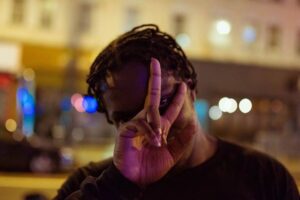 Creating records that defy categorisation, rooted in hip hop with the attitude of punk, Blue Daisy – aka north Londoner Kwesi Darko – is a well respected force within a loosely threaded, music scene that harries the popular playlists from its anarchic and underground hideouts including Manchester’s Chunky, Nottingham’s Sleaford Mods and L.A.’s The Gaslamp Killer.

Honing his art for the past year with guerrilla gigs from transit vans, solo support for Public Enemy, production credits on a track by Tricky, tonight’s gig showcases his second album, ‘Darker Than Blue’. A recording 4 years in the making and as epic in its light vs dark theme, as any concept album should be. Compositionally grounded in hip hop and left field electronic music; with the sonic chaos of dubstep, grime and punk bleeding through, Darko creates something completely fresh from the source. From the opener ‘My Heart’, celestial keys and spoken word hover over underworld electronics, both spacious and claustrophobic, setting a soulful but unnerving tone. Until, leaping centre stage, he swerves the songs into thrash power chords and earthquake sub bass, winds them around oscillating house riffs and hurls them, and his voice, into a metallic void. Live drums power it along: stoner, skank and improv – bludgeoning, serial variations on rock and jazz – till they are cascaded back to dub. Threatening emotional detonation on every moment, he stalks, recites, croons, struts and ultimately during ‘Fucked Up’, hurls himself, MCing into the crowd, rallying the room into a frenzy of white-hot energy. Lyrically, this is history told from the bottom up, rooted in storytelling, rap and street poetry; hard-won personal wisdom unlocks the deeper message of dislocation and re-empowerment, to frame and offset the soundscape.

Billed as ‘Blue Daisy and Friends’, he takes the composure to sit back on a couple of songs in order to let their beauty and pop soul glint through. Supporting poet, Kojey Radical, has already set the nights tone – words, scratched beats, turntables – culminating in a spectacular a’cappella. Connie Constance’s 20 year old voice, takes the lead on ‘Alone’ and it, into higher territory, Jelani Blackman on ‘Like Water, Like Blood’ sings an impassioned, fractured lament. Breathing time, to gather thoughts on the keys: a gentle meandering of atmospherics and blues before the next burst. Returning to the fray, calling up new rhythms from the drummer and more mayhem from the speakers, genre is sacrificed in a twisted, anarchic rewrite of influence, the warped rock n roll of
‘Gravediggers’, the darkly observant irony of ‘We’re All Gonna Die’.

Finally he leaves us with ‘You And Me’ a song with the same dark and soulful vibe we started on, exiting the stage, dripping wet and utterly exhausted. To return, on demand, moments later and recharged with ‘Pure Anarchy’, a track so visceral, so damming of complacency and infectious in energy, its chant of “If I was to die today I’ll be glad/ but before they take me/ I gotta let em know/ I’ll run with Pure Anarchy” threatening to burst out of the sweaty basement and on to the rain-lashed East London street above; whilst the crowd go utterly crazy.
Right now, a Blue Daisy concert is the most anarchic, intelligent, punk gig you’ll witness, the most boisterous blast of bass you’ll jump to. Streets ahead of mainstream rhetoric and culture.

Darker Than Blue is out now on limited edition vinyl, MP3 download and CD