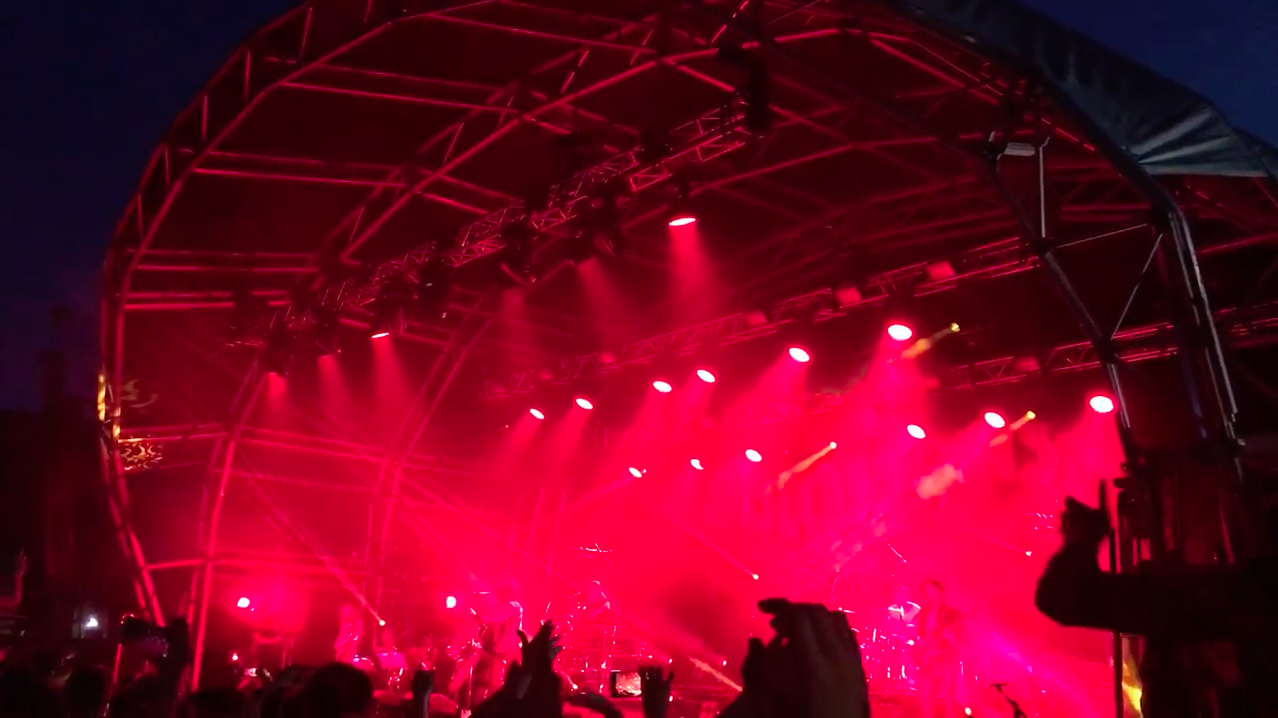 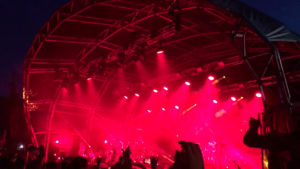 Blossoms homecoming show in Manchester was a sold out triumph. John Robb was there to witness the latest chapter in Manchester ever evolving musical history…(Louder Than War is the leading music website – join our facebook page here)

1. Firstly Castlefield Bowl is a perfect concert venue. A specially built concrete amphitheatre in Manchester city centre. It sits in the former industrial canal basin underneath the railway arches held up by the huge cylindrical metal supports that every young band in the city has used as a backdrop for their debut photo session. This is the heart of the city – the very spot where the Romans built their fort on two small hills that named the city – Mamucium – kinda like mammary – cium – meaning ‘breast-shaped hill’.
Or if you fancy being a bit more northern and brusque about things,  ‘tit town…’
On a balmy night like this it’s quite magical with the sticky air adding a cloak of euphoria to the young, carefree and in the words of the Gallaghers Live Forever vibe of youth to the proceedings. One couple took this, arguably, a bit too far and were found shagging in the plastic toilets…and in there was also the man who stripped off naked and climbs onto his mates shoulders for a piggy back to a mass roar of approval from the audience who were subconsciously rubbing the backs of their necks afterwards…

2. This is the biggest headline slot of Blossoms career so far and one they have been talking up for months. You can feel their palpable excitement at playing this and it’s their sheer joy of being that adds to the rush of yet another young Manchester band joining the endless heritage. This is a heritage that is underlined by the setting in the reconditioned industrial heartland of old Manchester – an architectural parallel to the band’s own reconditioning of Manchester classic. Its their own version of course – Blossoms very much have their own sound – a guitar pop with a melodic sheen and yet there is still that psychedelic tinge that always coloured in all the great Mancunian pop. A lineage that is underlined by their cover version of Oasis’s classic Whatever complete with a string section and a huge singalong that makes you realise just how big the Oasis reformational be. They even dare to quote the uber band, Beatles wonderful She’s So Heavy during the outro of Deep Grass.

3. Blossoms have come of age. They are at that unique and thrilling point that every band gets to when they are both fulfilling their potential and pushing forwards. They still have that exuberance of youth but also that ambition of confidence and this is now a full stadium show and they physically fill the stage and sonically fill the venue. From the opening At Most A Kiss they own the place. It really is meltdown down there with the now customary northern audience singalong drowning out the band, singing all the instrumental parts before coming in with the vocals. The sheer devotion is something else and you can feel the love nd music and the lust for life leaving the band almost a mere conduit for this celebration.

4. Tom Ogden  has a great voice, the pure pop larynx that rises and falls with the songs and captures the hearts of the adoring and packed throng. His onstage banter is built around their regular dedication to anyone who has just been dumped and joyful quips about the whole scale of the event. His onstage solo moment for My Favourite Room is a delight and as it quotes with For Evelyn/Half the World Away/There Is a Light That Never Goes Out – a history lesson in the past and the future.

5. The audience is new Manchester youth. They understand that the city has a special musical history and in the new gig going tradition, like at Cabbage last week, they break out into song at any given opportunity and create an avalanche of mosh pit action at the slightest hint of sonic overload. It’s also more than lad rock – the girls are also out in force. Whilst waiting for Blossoms to come on the packed audience not only sing the anthem of the summer of 17, the post Brexit, post Theresa may new generation – ‘Oh Jeremy Corbyn’ they also sing along to Smiths or Oasis classics without feeling the weight of the past.

These songs were built for communal singalong then and now out of context fit perfectly into the modern day. Generation Why Not may be raiding old record collections or whizzing round Spotify for the classics but they are for the here and now and when Blossoms arrive on stage they are drowned out by their devoted audience singing along to their own newly forged classics.

6. Blossoms arrived as a bowl haired take on the psych pop of Toy and the Heavenly records wave of bands but developed very quickly into their own thing. Managing to balance their indie edge with that sense of adventure and that joy of guitar rush added to their melodic prowess that sent their debut album to number one and the band into pole position of the new Manchester lineage.

7. Blossoms are in for the long haul. There is an ambition to the band and a sense of exploring new ways of making their music. The string section on the stage tonight fits perfectly into their ambitious indie guitar and there are some moments when the criss cross their sound with the dance edge of pop reflecting the spotify generation’s lack of interest in imaginary barriers of music. In 2017 everything is up for grabs and everything is possible.

8. Of course Blossoms are not a Manchester band at all. They are a Stockport band and managed to mention this more than a couple of times in their set. They even leave the stage to an amusing pastiche of the Frank Sinatra’s New York song with Stockport shoe horned into the chorus. I guess these days Manchester is so big that it can afford to allow the surrounding towns their moment of glory! Stockport, of course, has its own musical history – not least Strawberry Studios where Joy Division notably recorded most of their classics and in the 21st century another chapter has been added to the hat town’s history.

9. 81 gigs so far in one year is not taking its stoll on the band. You can feel this a music first outfit and they have used the hard touring and festival guerrilla raids all over Europe not to burn out but to burn more brightly. They are incredibly tight and full of great moments – stinging guitar lines rise from the mix, great washes of hammond keyboard waves fill out the sound and rise up for their swelling solos and the bass rises for some great solos – really great four string runs that finish off songs with a flurry of driving melody or pick up other songs with dive bombing certainty.

10. Tonight, of course, is a triumph. the atmosphere is amazing – it’s like warm wave of devotion and joy and a humble young band brim full of talent taking the salute of the new generation Manchester. Stuff like this should be embraced. Blossoms are no freak hit but are now as embedded into the hearts and souls of new generation Mancunia (Mamacunia!) like the Roses and the Smiths and Oasis were before them. Tonight was a coming home and big moment in this young band’s story and as they end with their classic Charlemagne the whole place erupts yet again into a sea of arms in the air and endless dancing from the front of arena to the back and only a heart of stone would not melt to these kind of magical moments in pop.

The past was yours. But the future’s mine as someone once sung…another Roses is blossoming…