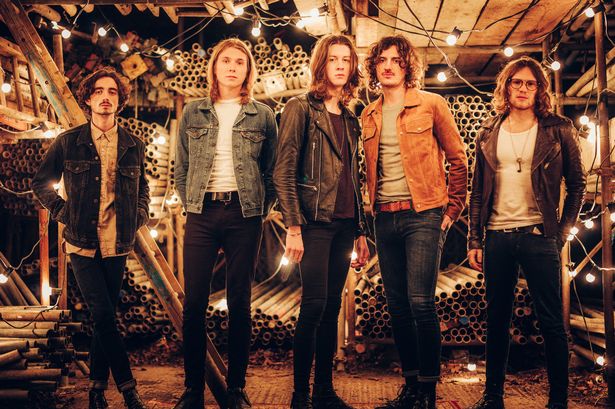 Louder Than War’s James Lowther caught up with Blossoms last month at Parklife ahead of their album release on the 5th August.

How is it all going for you at the moment? What’s going on?

Swimmingly. Just dead busy. Constant flow of positivity throughout the band, leading up to the release of the album. We just couldn’t be in a better place.

And when is the album out?

Are you looking forward to it?

Can’t wait! Been sat on the songs since January so we’re just itching to play them. We’ve been playing some of these other songs for like 2 and a half years and we’ve been on tour constantly. We’ve started rehearsing a couple of the album tracks and it’s sounding really, really good.

I’ve heard that the album is produced by James Skelly (of The Coral), can you tell me anything about that?

He’d done all the singles previously from August 2014, like our debut ‘Blow’, and then ‘Blown Rose’, ‘Charlemagne’, ‘At Most a Kiss’. By then we’d been signed to do an album and stuff. Once we got signed we didn’t have to faff about and find a producer.

And how did you meet James Skelly when you first started out?

You know what, today I looked on my old Facebook, and I messaged that (he shows me a picture of a message he’d sent to The Coral that they were a new band and would like feedback). That was in 2013. Then James got in touch with our now-manager, who manages The Coral.

Well they’re due to be supporting the Stone Roses soon, as are you guys! Are you excited for that?

Can’t wait. Me and Joe are City fans, we’ve got season tickets and that. So to support one of your favourite bands at your stadium, it doesn’t get better than that, really, does it?

What would you say is the highlight of your career so far?

We went to Japan last year, that was probably a collective highlight for us. And we did Jools Holland as well. Recording the debut album, just in general, was good. Looking back, I don’t think at the time, well we were just enjoying it. But looking back it was so good. We started recording it in September last year. But because we were on tour at the time, we couldn’t do like two weeks straight recording. We’d record for a few days, then we’d be back on tour. But I’d be writing more songs in between, so we’d come into the studio and we’d build these songs, which was kind of a fresh approach – it kept it exciting. It made it so the album doesn’t sound the same all the way through, but it all still sounds like us.

How’s touring life been, then?

We’ve been doing it pretty much nonstop since October 2014. Do a tour, then have Christmas. Then do a tour in February, then do festivals, and it’s just like that all the time. But it’s what we know, and we love it. It’s better now we’re on a big tour bus, this is like luxury now for us.

Are there any comparisons that you’re tired of hearing?

We don’t really get that anymore. When you first come out people try and put labels on you, but that’s understandable. When nobody knows who you are you need a reference point. We’ve grown out of all the things they used to say, we’ve evolved. Since ‘Charlemagne’, people just say ‘Arctic Monkeys, Oasis, Abba’ – which is cool with us. A few people have compared Tom’s vocals to Brett Anderson from Suede, which is pretty cool, and there is elements of that in there.

What has been your song of the year so far?

It can be your song if you want it to be!

I like ‘Middle’ by DJ Snake and Bipolar Sunshine. ‘Work’ by Rihanna, that’s a great tune. ‘Hotline Bling’ was last year, wasn’t it? Last year, the best tune was ‘The Less I Know The Better’, by Tame Impala.

Have you got a favourite venue to play at?

To be honest, a lot of them like the o2 Academy’s, they’re all quite similar. Southampton Guildhall was nice. I really liked playing at the Apollo in Manchester, cos since being little we’ve always wanted to play there. We kind of like the ones that look like old theatres and stuff. The Olympia in Dublin – that’s like an old theatre. But then even like Castlefield Bowl and the Albert Hall in Manchester’s good – we supported Charlatans there last year, and then this year we sold it out in our own right. If you’re talking small venues, we even like Night and Day and stuff, we still go there. when we first started we did loads of gigs there, it’s kind of like our hub I suppose.

How do you think your sound has evolved since you started out?

Your sound evolves naturally, doesn’t it? So I dunno, it’s kind of like an unconscious thing. Even little things with just the keyboard sounds. We always wanted to sound more modern, and then when we started working with James Skelly he was always keen to push the modern sounds. So even something as simple as that, swaying to more synth-y sounds opens up more doors in your head.

Well I think one of your strengths is that you’ve developed such a polished sound.

There’s a band called The Big Moon that we played with in Paris, and when we got off stage they just turned to us and said, “You’re a well oiled machine”. It’s what happens when you tour for two years straight. When you start and you record your first demo, you literally are a garage band. We didn’t have the money to go to a big studio or anything, so we started recording ourselves on an 8 track, so the first tracks we put out do sound a bit garage-y. But we didn’t set out to be like ‘Ooh, we wanna sound like a 60s garage band’ – it was just, we need to put something out so let’s record. And at the time we were probably like, ‘Is it clear enough? We want it to sound clearer’ – d’you know what I mean?

How did you all meet?

Me and Joe have been mates since like school, we met in year 8 on a school trip to Alton Towers, like 11 years ago. Stayed in touch, got into music. I was into music at like year 8, but it’s not something you tell your mates about. My dad got me into music like ‘Waterfall’ by Stone Roses, and loads of Oasis. But music wasn’t a talking point then. Football was still the main thing then. Later teens, me and Joe bonded over Oasis and went to see them when we were 16. I started writing songs when I was like 15. Charlie was in bands since he was 13, he was in the school band playing bass in an oversized blazer. Joe would come to my gigs with my bands. Joe picked up the drums later. Josh – Joe used to date Josh’s sister. That was the connection. He always had a guitar since he was like 11. Josh was in a band at the time, and I gave him first gig then supporting my band, just at a small pub in Stockport and I remember being really impressed by his guitar playing. And it just went from there. We used to rehearse in Charlie’s grandad’s scaffolding yard. And then Miles was just one of those people, we used to go to parties at his flat above the curry house. He heard we wanted a keyboard player so he said he’d play keyboard for us, and that was it, the rest is history. That was quite a long story that, wasn’t it? It’s well rehearsed now haha.

Are there any questions that you hate?

I tell you what I hate, when people are like “Hi, The Blossoms!” – there’s no ‘the’! I hate it when they ask: ‘how would you describe your sound?’

I know that some bands hate the ‘How did you get your name’.

Nah, that’s dead easy that. It’s from a pub in Stockport. I think people hate that when they have to proper think about their band name.

How do you feel that the Manchester music scene has had an impact on you?

It’s kind of like what I’ve been brought up on. When I’m writing a song it’s all bleeding into that. It’s my mum and dad’s record collection, you’d be daft to say that it hasn’t influenced you. And their attitudes as well, about like wanting to be big and that – for example, Liam and Noel. I’ve watched interviews with them and even from early on all they wanted was to be big. I don’t know any different. They weren’t putting that on, that’s who they are. We’re just five lads from Stockport. We’re just us. And we just love what we’re doing.