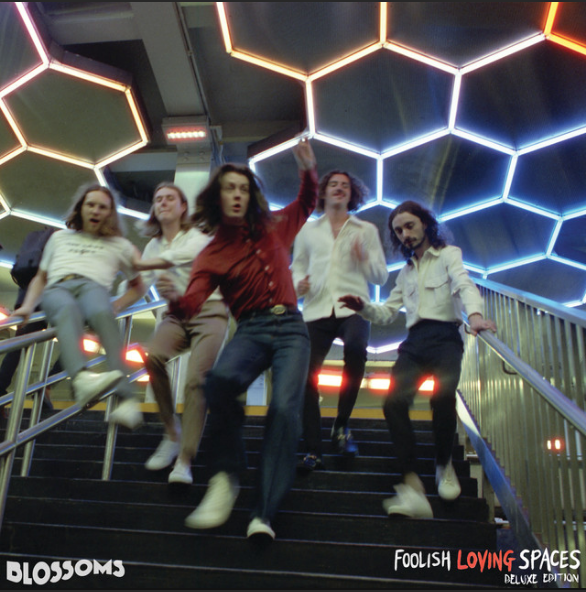 Stockport-based group Blossoms have returned with their third record Foolish Loving Spaces. On the album they manage to take influence from some of the biggest icons in the pop world, all while keeping their Manchester-sounding roots well intact. By doing so they produce their most accomplished and best sounding work to date.

It’s no lie to say Blossoms have achieved a great amount of success in their short career so far. We all know them from songs like Charlemagne and I Can’t Stand it, though you may be surprised to discover the band have never had a top 40 single. This speaks so highly of their albums as a whole; they don’t rely on a big single and fill the rest of the tracklisting with fodder. This is especially true on their latest musical output.

Opening track If You Think This is Real Life is a joyous outpouring of melodic pop. Much in the vein of Abba, the vocal delivery is vibrant and the instrumentation incorporates every word that’s sung with a backing of synthesiser glamour. Lyrically the entire album is largely an observation of love and the ups and downs of being in it. This opening track is paired with some of the others so closely it could be a concept record.

The sharp-tongued lyricism all over the album is one of its key strengths. Lead single Your Girlfriend focuses on the possibly not-so-common subject of wanting to steal your mates’ significant other. Yet the story is told is with excessive charm, blissful melody, and an ever-so-cool slide guitar riff that repeats throughout.

The following track The Keeper follows in many of the same footsteps. It sounds like a celebration of a classic pop sound that’s lost its way in recent years. It’d be hard to argue this group aren’t one of the best modern examples of taking classic songwriter tropes and putting their own spin on them, as frontman Tom Ogden sings “Let’s spend this life as one, until we’re bones”.

Next up is the best track on the album, My Swimming Brain. The band have stated in interviews it was the song that came to them first and kicked off the record, which you can really tell upon first listen. This song contains all the foundations that hold this record in such a positive light. It sounds like a re-mastering of disco, giving it a modern lick and packaging it in a pop tune.

The power of the backing vocals is something that shouldn’t be ignored on this track, or throughout the album as a whole. They add an extra layer of excitement to the songs and help to certify that older sound which Blossoms seem to love conjuring up.

One of the strongest aspects of the album is that it never really seems to dip in form. Sunday Was a Friend of Mine is pure poetic lyricism. Oh No (I Think I’m In Love) features a falsetto chorus that sparks with elements of funk and dance. Romance, eh? sounds like the band were walking around the streets of Manchester, searching for the sound of The Stone Roses when they came up with the idea. It’s a relentless sounding record that never takes its foot off the gas.

By the time you’re done with closing track Like Gravity, all you’ll want to do is put the album on again. My favourite album of the year so far, and for me it’ll take some beating.

All words by Jared Musson, find him on Twitter and see more of his work here