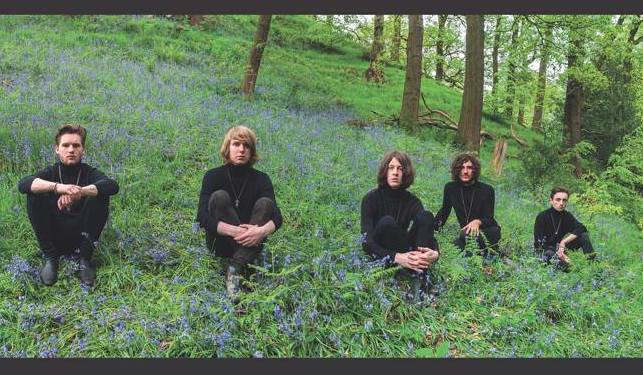 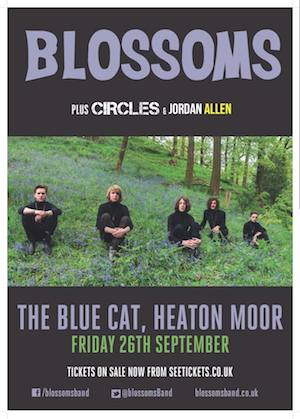 Stockport-based Blossoms are rapidly making a name for themselves in Greater Manchester and beyond. Louder Than War’s Fergal Kinney caught them live recently, check out his review below.

If there’s one thing British indie music doesn’t need more of right now, it’s young 60’s fetishists in black polo necks. Blossoms are indeed young 60s fetishists, and yes, they all wear polo necks, so why does this feel like a band that British indie music could really do with right now? Across the last two months, Blossoms have played a succession of Friday night gigs at Blue Cat in Heaton Moor, a stones throw from their native Stockport, and the palpable buzz around the band in the city comes to a head tonight as, for the first time, there are no tickets available on the door. What the band offer on stage tonight suggests that this might start to become a regular occurrence. ‘Blow’, the band’s latest and second single is aired early tonight, hook-laden without dirtying its knees begging for radio playlisting, and containing just enough early-Verve reminiscent enigma and menace to keep it interesting. The swirling psychedelia of ‘You Pulled a Gun On Me’ – quite certainly amongst this year’s strongest debut releases – is introduced tongue-in-cheek as ‘for Phil Spector’. Fortunately – given Blue Cat’s size and my relative proximity to the stage – it’s not Spector’s taste for artillery that this band emulates, but his slavish commitment to an irresistible pop melody. Blossoms do a great line in Zombies flavoured drizzly melancholy, but an even better one in sharp, memorable choruses that don’t outstay their welcome.

Not often is it that a singer picking up an acoustic guitar marks the high water mark of excitement in a set, but tonight it’s two pastoral, acoustic-led offerings delivered mid-set that point towards a very bright future for Blossoms. Indeed, for all their many sixties reference points – and there are many – there is much that is fresh and contemporary about them, influenced as obviously by Humbug-era Arctic Monkeys and the Coral as they are ‘Forever Changes’ and ‘Revolver’. And like both Arctic Monkeys and the Coral, this is a band at their best when not playing it safe; the rhythm section flit seamlessly from liquid grooving to full throttle wig-out and then back again without blinking, whilst Myles Kellock on keyboards knows when not to over-egg to organ pudding. When singer Tom Ogden does come out from behind his guitar, there is something of a void still yet to be filled, but what may be lacking in onstage presence is compensated generously by the sheer strength of their material and the attitude with which it is delivered. More than this, something in the Stockport water gives this band a little more grit and edge than proficient yet thoroughly safe contemporaries like Temples. Yes, Blossoms can certainly be described as yet another retro-leaning psych band, but it’s a fool who dismisses them as this.

All words by Fergal Kinney. More from Fergal can be found at his Louder Than War Author Archive.