Following Bloodstock part 1, Lucy Shevchuk delves deeper into the Metal To The Masses competition and chats with organiser Simon Hall. Simon gives us a brilliant insight into the part of Bloodstock that really makes the festival shine.

I definitely thought I’d be recovered by the time I put out my “Part 2 of Bloodstock”. But a chest infection, laryngitis and two weeks of being sad-to-be-missing-festivals later, here I am, in bed, reminiscing about that awesome experience whilst consuming many Vocalzone lozenges.

I got to catch up with the amazing Simon Hall, where we chatted everything M2TM. M2TM is a battle-of-the-bands-format competition with a difference: it allows bands from across the UK, Ireland and Scandinavia to compete for a slot on the New Blood Stage at Bloodstock. It’s plain genius. But don’t take it from me, take it from one of the guys who helps run the show. Louder Than War: I really admire everything you do with M2TM, I started writing because I want to help out the underground. Whose idea was Metal To The Masses and was there anything specific that kicked the idea off?

Simon: My first encounter with Metal To The Masses was back in 2007 when my own band played what was known then as the Lava Stage, and over several beers I got talking to Paul Gregory. Before I knew it, I’d made a whole bunch of commitments, and within a couple of weeks I was control of the initiative and I’ve been running it ever since.  But the concept was purely Paul’s idea, and his plan was to offer regional venues a reason to host underground events and to bring undiscovered metal bands to a wider audience at the Festival. From that point forward, Bloodstock has become a leading light in offering a spotlight on otherwise unknown regional venues and bands. Would you say that M2TM is for metal only, or would you say anyone can apply if they fit under rock and metal? Is there an expectation of “heaviness”?

Absolutely it has to fit within the rock and metal landscape, but that can range from a 10-piece symphonic metal band to a solo artist, yet both offer up their own “heaviness”. With the creation of music changing, along with styles and delivery, we’re always going to be open to new directions and interpretations.  There’s no room for old school gatekeepers.

Do you have a hand in the layout of the Festival? I noticed that the Jagermeister stage was positioned perfectly to get people stumbling upon the lesser known bands…

Well, like I say I’ve been with the company since 2007 and everything has grown organically, and the Jager stage is a perfect example.  We felt we needed something to offer up during the mainstage changeovers, and with Jager coming in as a major sponsor it seemed a perfect fit to offer up an additional stage and bar.  Initially it started out as an acoustic/solo/duo-style stage, but with the nature of rock and metal it became all too obvious that bands and fans alike were wanting it cranked up.  To this day I’ve hosted everything from one man death and black metal projects to full thrash, grindcore and even a seven-piece female Manowar tribute act ….. the engineer was a tad perplexed by that one, but I do like setting them challenges. 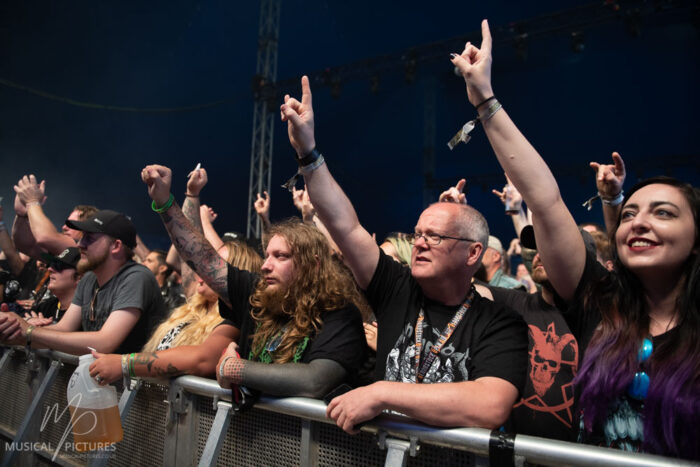 There are also M2TM heats in Europe, for example in Norway. How many M2TM events are there and what made you want to expand to outside the UK?

Prior to the pandemic we were hosting approximately 30 events both here in the UK and obviously in Scandinavia, Ireland etc.  It was always my plan to branch outside of the UK, not only for the obvious understanding that metal is a global entity, but I am always conscious that you could find yourself with a diminishing pool of bands to choose from if you focus on one area for too long.  To that end, I look to swap out regions after a few years so as not to go over the same old ground and it gives the town/city chance to let bands start up, develop and get a hunger for the initiative again.

What have been the main challenges in organising M2TM?

In the early days it was a constant battle to convince bands, fans and venues that the M2TM was the way forward.  The problem was that at the time there were so many ‘BOTB’ platforms that were less than reputable and based more on text voting, crowd votes and generating money and less on the quality and growth prospects of the bands.  Looking back, it was grim with me constantly facing online arguments and disgruntled punters at venues.  But I’m nothing if not belligerent.  One prime example was a final in a region where the promoter had offered up a five band final with four great bands and one local crowd favourite. All the bands were great, however the crowd favourite were certainly not the best band on the night, and when I announced the winner I was met with about 250 punters hurling full beers, the finger and a torrent of abuse …. But here’s the thing, the band I chose went on to play Newblood, the Sophie Stage and are recently signed to a major label. Nowadays that’s all but behind us … all we have to negotiate now is a global pandemic. 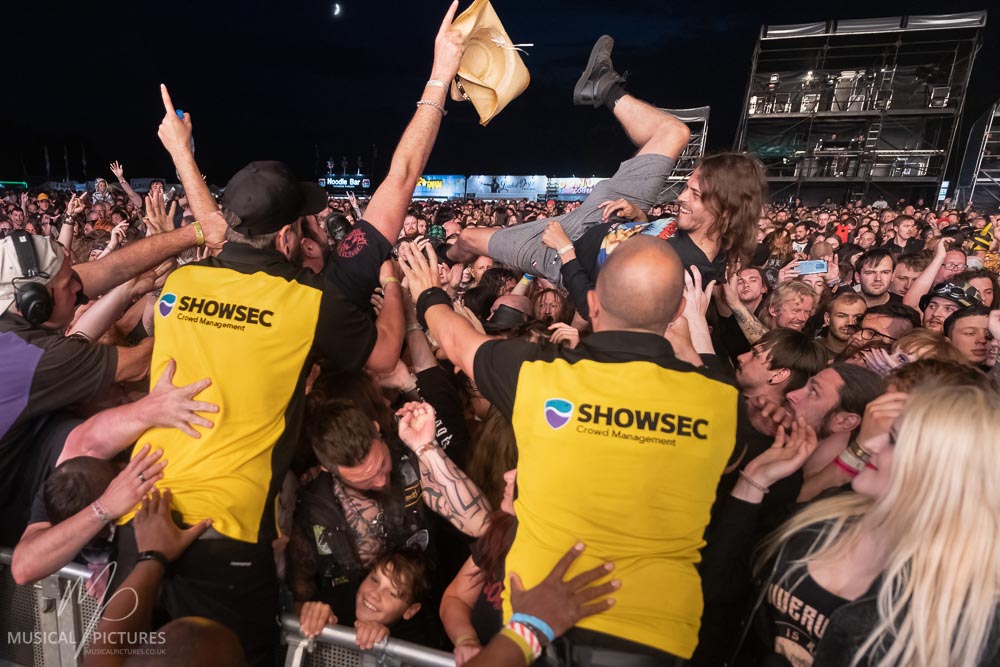 What do you think would make a band really stand out amongst the rest throughout the M2TM competition?

It’s very much down to the performance on the night, but considerations such as professionalism, originality, and interaction with the audience are all considered.  But it’s so open ended – take, for example, a black metal band such as The Crawling (NI winners in 2016); the last thing I needed was interaction, far from it they barely said a word in between songs, and instead we were subjected to the continual sound of flies.  It was simply mesmerising and completely set a scene in which the music worked so well … and I guess that’s the big thing, you have 30 minutes to captivate us and showcase your music. Use your time wisely and rehearse the set so it’s water tight and promotes you in the best way.

How are the judges selected for each M2TM event?

When it comes to the heats, these are all judged by independent panels alongside a maximum 50% crowd vote. This is simply on the understanding that venues need punters to feel involved in the process, yet at 50% they don’t hold an overriding sway on the events, therefore avoiding the previous scenario.  When it comes to the later stages of the initiative, the crowd vote reduces to 25% and then 0% on the showcase final.  All these finals are hosted primarily by myself or Rob Bannister (BOA Compere). However with the popularity of the M2TM it is becoming harder to make all the finals, so we sometimes use judging panels made of previous winners, local music journalists etc. So long as they have no affiliation with the bands playing, then we’re ok. 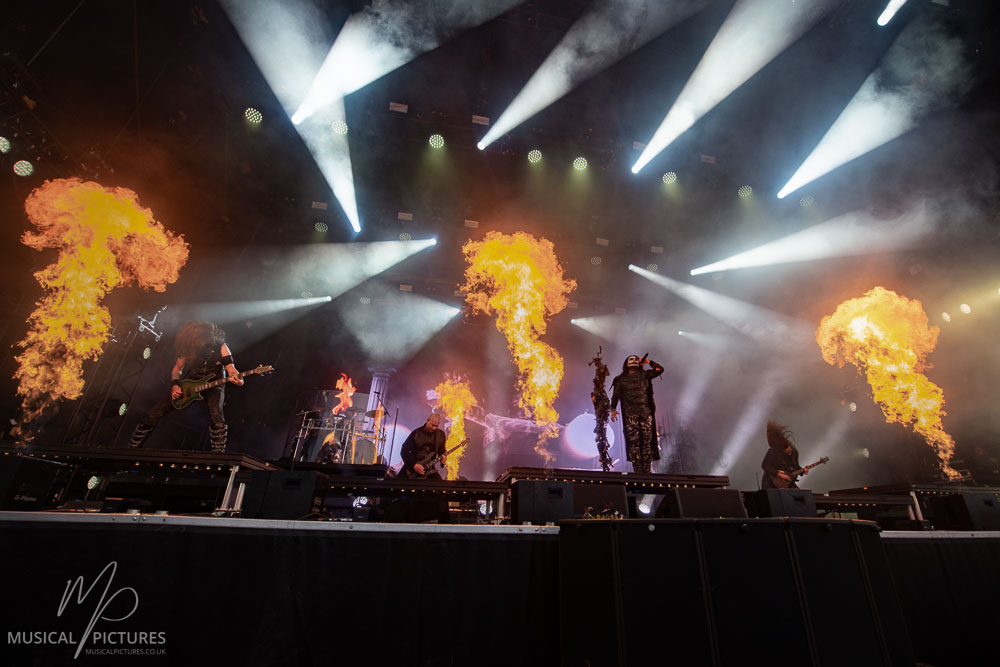 Without getting you into trouble with favouritism, is there a band you’re really excited about that’s come through M2TM that you think people should be keeping an eye on?

I’ll not get in trouble because I’m happy to shout from the rooftops about previous winners, especially those that have used Bloodstock as a positive building block to further their chances in what is a very, very difficult industry to be successful in.  This year’s Bloodstock was particularly special, seeing as we had to be reliant on UK acts more than ever, and to see previous winners such as Divine Chaos, Bloodshot Dawn, Conjurer, Ashen Crown, Lunas Call, Anakim, Raised By Owls, Agrona, The Crawling, Famyne, Garganjua, Dog Tired, Deified, Primitai and King Goat all smash it … and that’s just this year.

Are there any bands that have had notable success after playing Bloodstock?

All of the above and about 150 others. Joking aside, I can pretty much tell those bands who look at winning the M2TM as simply a step in the right direction and those who look at playing Bloodstock as their zenith. I guess it makes it no less important either way. 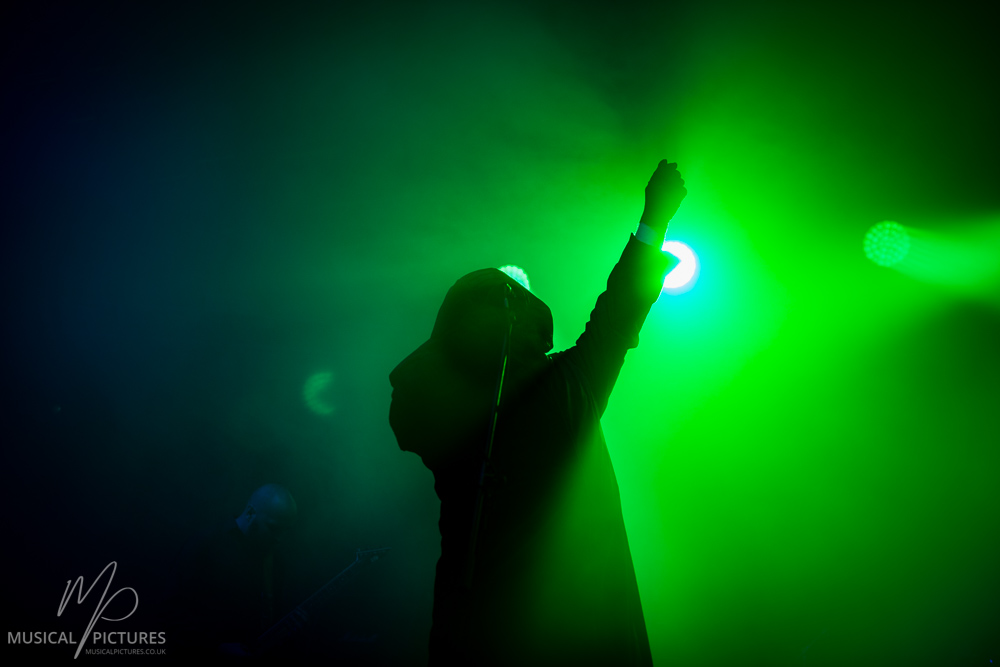 Are there any more plans for M2TM in terms of changes/developing the concept?

I think the 2022 edition will be about consolidating where we are after the pandemic/Brexit and to give venues and bands alike the support they so richly deserve. So, reaching out to other countries may be held back until we know how the land lies as regards bands playing abroad and travel restrictions etc.  But after that, I can see it growing in strength and I very much look forward to hosting the M2TM Seychelles or Bahamas.

How do people apply for M2TM?

More information on the hosting venues for 2022 should be up by the end of September and all details will be on both the official Bloodstock social media sites along with the dedicated M2TM page.  Further to that, for any venues/promoters looking to host the franchise please feel free to hook me up on my email.

Bloodstock 2021: Part 3 will include interviews with some of the mentioned M2TM winners and more of the underground bands that blew me away. See you there, and thank you to Simon Hall for giving us a great insight to this awesome aspect of Bloodstock.

Photography by Simon Reed. His website Musical Pictures is:
https://www.musicalpictures.co.uk/ and you can visit his author profile for Louder Than War here: https://louderthanwar.com/author/simon-reed/

Please note: Use of images in any form without permission is illegal. If you wish to use/purchase or license Simon’s images please contact Simon Reed via his email address at simon@musicalpictures.co.uk