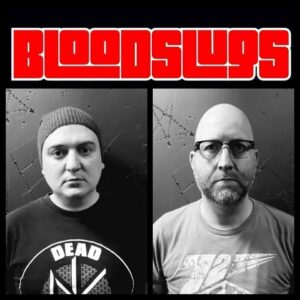 Louder than War’s Ioan Humphreys gets his ears battered by the delightfully noisy and aggressive BloodSlugs.

BloodSlugs are a guitar and drums duo from Cardiff, South Wales. Formed in 2016 they use homemade instruments which apparently makes for an interesting sight live, let alone the racket they make on record. Already firmly establishing themselves as a formidable live act, they are already gaining a steady fan base. Remission is their first ever recording and is released as a split with fellow noise makers Clay Statues.

Dense-as-fuck riffage opens up this track. Pounding drums and heavy use of the ride cymbal create the perfect start to this awful racket. The aggressive vocals join in and slowly but surely you can feel the huge riff that is surrounding this track. The unrelenting drums, heavy guitar and unearthly screaming are joined by squealing feedback that again adds perfectly to this gorgeously unpleasant experience. Stop-start riffs towards the end break up the attack, before the onslaught restarts and the track is taken to its feedback drenched bitter end.

This is really, really great, noisy-as-fuck stuff and is a promising debut from Blood Slugs. I can’t wait to hear what they come up with next.

BloodSlugs are Mark B on Cigar Box guitar + vocals and Jim C: Drums

Remission can be bought at BloodSlugs Bandcamp.