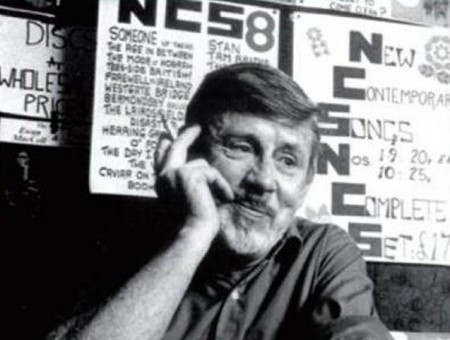 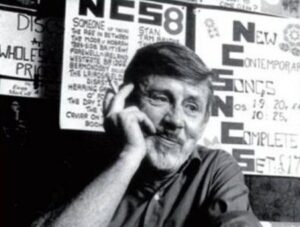 Blood and Roses – The Songs of Ewan MacColl
The Lowry, Salford
4 November 2015

We take a look back at the life and music of Ewan MacColl as Blood and Roses plays at The Lowry, Salford.

Ewan MacColl had a voice like homebrewed whisky filtered through coal. He was a notorious raconteur, a poetic lyricist and a militant socialist who was considered too left wing for the Communist Party. He could reduce people to tears with a ballad and then reignite the room with a polemic against injustice without pausing for breath. Much like Woody Guthrie, he wrote about everyday people and the chasm of reality that separated their hopes and fears.

‘The Joy of Living’ was released this year to coincide with what would have been his one hundredth birthday and featured various artists covering his songs. Amongst them are Jarvis Cocker, Steve Earle, Billy Bragg, Rufus & Martha Wainwright, Martin & Eliza Carthy and Christy Moore but even this eclectic rollcall doesn’t illustrate how far and wide his influence was cast. Some of the singers who appear on the release are present tonight, as well as his sons who make up the bulk of the players in Blood and Roses.

Peggy Seeger co-wrote and sang on many recordings with Ewan, offsetting her husband’s baritone with a voice steeped in an appreciation of Alan Lomax’s American field recordings. Tonight she strides on stage and begins proceedings with the ‘Ballad of Accounting’, as Chaim Tannenbaum ably duets with her in MacColl’s absence.

The lyrics smoulder with a frustration and disdain for conformity and are more believable than any rock and roll rebel sloganeering through a comeback tour: “Did you read the trespass notices, did you keep off the grass? Did you shuffle off the pavements just to let your betters pass? Did you learn to keep your mouth shut, were you seen and never heard? Did you learn to be obedient and jump to at a word?”

It can be hard for some people to fathom the radicalism of folk music, especially since it’s been hijacked by public schoolboys wielding banjo’s and twee singer songwriters clogging up the CD rack at Tesco’s. Nevertheless, it’s hard not be roused by the power of a simple song as it passes over from one generation to the next. Folk songs are innate to a culture of aural storytelling that we share as people the world over.

From Greek Rebetiko to Delta Blues, Gaelic Bards to the Griots of West Africa – it’s no coincidence that folk music across the globe share’s similarities in scales, melodies and even subject matter. Although MacColl was in infamous purist when it came to who should be able to sing regional songs, tonight’s contributors are thankfully less strict.

Damien Dempsey does a good job of singing ‘Schooldays’, a song that Luke Kelly made his own with the Dubliners, and nobly recreates an atmosphere of a lock in at a pub in the austere setting of the Lowry Theatre.

He also does a sterling rendition of ‘Green Island’, a song that MacColl is said to have penned for Christy Moore. For all the growing mania and hypocrisy surrounding remembrance at this time of year, the reality of British rule and military action outside of World War One is all but silenced. MacColl was no stranger to upsetting the established order, with both he and Peggy blacklisted across each side of the Atlantic for wanting that most heinous and extreme thing – peace. It says a lot about the current political climate that an old folk song can give a pertinent perspective that’s absent in the media.

Other than Bert Jansch whom he influenced, there are few folk guitarists as captivating as Martin Carthy who’s dynamic way of picking a guitar brings an added dimension to ‘Champion at Keeping ‘em Rolling’. He’s joined on stage by his daughter Eliza on fiddle who lends her folk credentials to the ‘Moving On Song’. This depicts the struggle that travellers faced from hostile communities and is now applicable to refugees in most of Europe. Snatches of ongoing relevance in MacColl’s lyrics are their greatest strength and why his repertoire is so timeless.

Understandably, Peggy Seeger knew him better than most and regales the audience with various anecdotes and tales that offer great insight into why the fire in his belly blazed with such ire. Throughout the show, there are various pictures displayed as a backdrop and when Peggy performs two songs about his parents, their sepia tinged faces appear on screen. ‘Nobody knew she was there’ was penned late in MacColl’s life and recalls how his mother toiled away without recognition doing cleaning jobs and housework until ‘only the faded servant…is left.’ ‘My old man’ describes the feeling of watching his father’s pride deteriorate during long term unemployment but far from being defeatist, the last verse urges his own sons to ‘fight back while you can’. Despite the current employment figures fiddled with by the DWP, it’s yet another song of his which is as timely as any cultural observer chasing the zeitgeist.

Ewan MacColl never forgot the humiliation that his parents faced from a government intent on breaking workers to satiate their own greed. His songs are a passionate reminder that your rights are things to be fought for and not taken for granted and as long as these freedoms are in danger of being eroded his songs will live on. Without them – ‘I think I would rather be dead.’

The ‘Joy of Living’ can be bought here.