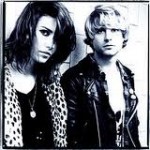 Blood Red Shoes have just begun a tour promoting their recently released album “In Time to Voices“. Our man, Richard Emery, was lucky enough to catch the second date on the tour & his report is as follows.

The celebrations may be taking place in Southampton tonight (something to do with football ”â€œEd), but the gig to be at is in Portsmouth, where Blood Red Shoes descend upon the Wedgewood Rooms, supported by The Cast of Cheers, their acolytes on this tour.

Personal devastation at the Shelley Long no-show is cut short as soon as The Cast of Cheers hit their first few notes. For some reason I had marked them down previously as yet another average guitar/synth outfit (perhaps because they suffer the curse of modern indie ”â€œ they sound so much better live than on the receiving end of a polished studio production). Well, I was wrong!

Instead I have the breath whisked away from my lungs not once but twice in short succession. Immediately the bass-and-drums backbone in particular is hard, fast and heavy; exciting stuff, and they’ve got the style to match the sounds. Just as that initial moment of surprise begins to wear off, they catch me out again by cranking things up another gear. Two whammies in the space of the first song – that’s more than most bands deliver in a set.

Having been won over with solid, driving rhythms, I can start to appreciate their musical enterprise. At times they sound a little like Devo injecting Red Hot Chilli Peppers, at others just a little like Primus possessed by Peepholes. Comparisons to fellow countrymen Therapy? would not be unwarranted either. They share that adrenalin-baiting intensity.

I had no idea The Cast of Cheers were this good, and I’m feeling a little foolish for missing their Joiners (legendary Southampton ”Ëœsmall venue ”â€œEd) gig in March. I enjoyed their set thoroughly, despite the prancing junkie behind me, who managed to connect with his feet and elbows numerous times. 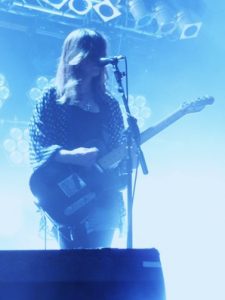 A lot of head-liners wouldn’t touch such a support band with a bargepole, for fear of being upstaged, but professional pulse-raisers Blood Red Shoes are no slouches themselves when it comes to throwing an audience on its back.

It is four years since I last caught the dynamic duo in concert; far too long. That had been a rare one, because Laura-Mary Carter was then too ill to sing and vocal duties fell solely to drummer Steve Ansell. Laura has no such problems tonight; both her voice and Steve’s are strong and strike out above the tumultuous racket the pair of them manage to produce wherever they go. If you close your eyes you could easily believe there is a four-piece on set.

At times it looks not so much like a gig as an unholy summoning, as Laura and Steve occasionally appear over the heads of the crowd, Laura looming portentously out of the darkness (It is so dark the band are often out of sight to the naked eye, and we have only the booming noise of stinging guitar chords and battered drums as proof that they are actually on stage).

The biggest audience reaction is for the second album sing-along, Light It Up. Reliable old favourites like It’s Getting Boring Down by the Sea and I Wish I was Someone Better remind us why this band first got us going in 2008. The newer stuff is a slightly different proposition. Over their three albums there has been steadily less to denote indie-dom, and their current playing field is firmly Rock. This more conventional direction, though not what I myself might have hoped for, may work to their advantage. Looking around the audience it seems that Blood Red Shoes have bridged the generation gap, attracting punters of all ages.

Best to catch them now while you can still get away with paying a tenner.

Hey look ”â€œ I got through the whole review without using the phrase Rock Goddess! ”Â¦doh!

With a bit of luck this is the set list (poor hearing and a bad memory for song-titles may dictate otherwise):

1 It’s Getting Boring by the Sea
2 Doesn’t Matter Much
3 Cold
4 Heartsink
5 Say Something, Say Anything
6 In Time to Voices
7 When We Wake
8 This is not for you
9 Light It Up
10 Down Here in the Dark
11 Keeping It Close
12 You Bring Me Down
13 Lost Kids
14 I Wish I Was Someone Better