I bought a guitar on Thursday night. It was entirely accidental and entirely the fault of Blood Command. Well, that’s my excuse, anyway! How was it their fault? Well, cue the fancy effects and prepare for a flashback…

A few hours previously, on a cold, damp Manchester Thursday evening, I’m stood looking at the most unassuming gig poster – a handwritten sheet of A4, informing us that Blood Command and Autumn Ruin are upstairs. It’s just taped up next to The Star and Garter stairs and is perfect for the way the night already feels (although, sadly I didn’t get to hear much of the Autumn Ruin set – Manchester has so much public transport, but so little effective public transport).

But now to Blood Command. Whilst the new album, Cult Drugs, is a hammering statement of intent, it has to be said that it’s live the band really show their chops and transform The Star and Garter into a sweaty, pulsing explosion of passion and power.

Playing smaller venues on nights off from their current tour with Rollo Tomassi, the Norwegian band (expanded to a 6 piece for live work) effortlessly fuse the bounce of ska with the pulverising scuzz of post hardcore and their own style of driving hard riffing punk rock. Unexpectedness and dynamics rule the night with Karina Ljone alternately roaring and soaring on vocals, whilst the songs themselves shift between mood and direction whilst keeping the intensity firmly in the red.

The Star and Garter, for those unfamiliar, is a very basic venue. Which isn’t a criticism – the place has a vibe all of its own and a very simple, focused feel. You’re here for music. Loud, honest music. And with no lighting rig, smoke machine, or set dressing, the band have to rely on their stage presence to carry the performance… and I feel that we were given a much better show for it. The amount of time spent on the road together has obviously made for a very slick, well drilled band, but not at the expense of spontaneity. It still feels like watching the first night of the tour, instead of the twentieth. 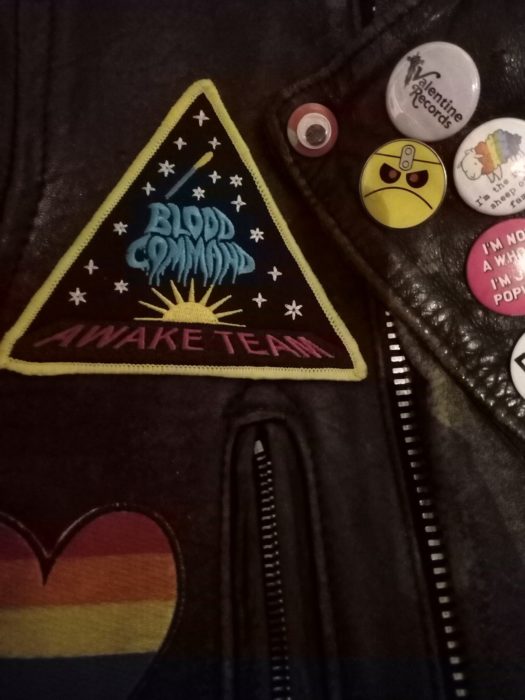 So what about the guitar? Where does this fit in? Well… the entire band were captivating to watch (when was the last time you went to a gig where there was no-one talking at the back?), but especially so when it came to Ljone and guitarist Yngve Andersen. The latter was sporting an interesting combination of a white Adidas tracksuit, headband and ’70s ‘tache. But between the high kicks and foot-on-the-monitor rockstardom, all I could think was “that is so cool” and “I really want a guitar like that”. Yeah, they were that awesome I wanted a guitar just like that… I can’t actually think of a better example of what it means to be a great band. They not only entertain, but excite and inspire and leave you bouncing inside even when you’re stood still.

As the last reverberations of an encore died down and we all spilled in to the night, I turned to my other half and mentioned that I don’t think we’ll see Blood Command in a venue this small ever again. Hell, they deserve much more recognition and hopefully by the time they come back to visit they’ll have it.

So yeah – waking up on Friday morning, I had a whole pile of merch (including a patch for my jacket of doom), a banging hangover and an email saying “your order was successfully placed”.