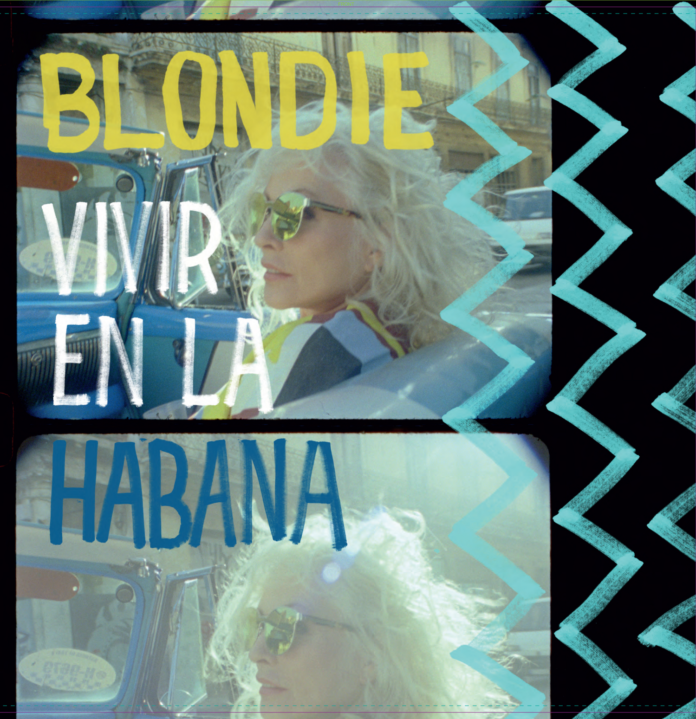 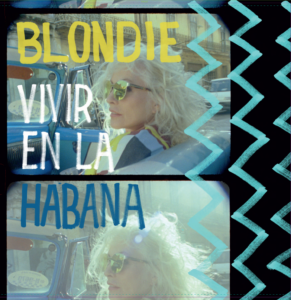 Six track soundtrack EP taken from the film capturing the band’s 2019 live debut performance in Havana, Cuba.  Featuring some of Blondie’s most loved classics with a Cuban twist performed with Cuban band, Sintensis – including ‘The Tide Is High’ and ‘Wipe Off My Sweat’.

The UK had the Clash. The USA had Blondie. The Only Band(s) That Mattered as far as global success and influence are concerned.  Groups who took punk to places other bands didn’t reach. Who mixed it up with other genres: reggae, hip-hop and in Blondies case disco.

A mildly contentious comparison maybe, but think about it.

Of the CBGB’s bands: The Ramones: perfection, originators, but they never really progressed musically and only conquered the world thanks to a neat t-shirt logo.

Talking Heads were always art-school outsiders and became the biggest cult-band ever.  Television, Suicide, Heartbreakers, Dead Boys and so on were all great bands but had limited mass-market appeal.

Blondie – conquered the planet – some might say thanks to Debbie Harrys looks and charisma but Blondie were always a band -and the music was always great.

Plastic Letters and Parallel Lines are two of the most perfect pop records ever – and always will be.

So, it’s nice to be able to cover their new release in 2021 after being a follower since 1977, when I first heard Rip Her To Shreds on Radio Luxembourg.

You all know the history of the band, you may have read Debbies autobiography, so all I need to do is walk you through this latest release. Basically though, it’s the best thing that the current line-up pf Blondie have released.

Blondie played Cuba in 2019.  Like the Manics before them – from whence Louder Than War got its name. (Nicky Wire told Fidel Castro their concert might be a bit loud to which he replied ‘Will it be louder than war?’) And lest we forget it was the place where Kirsty MacColl tragically met her death.

The film, due to be released later this year, goes into the influence of Cuban artists on the band, as well as the crossover from Havana to New York City politics and the last minute surprise and disappointment that Chris Stein unexpectedly wasn’t able to attend. Under Rob Roth’s direction, the film which features narration from Debbie, Chris and Clem presents a meditation on this formative trip showcasing highlights from the two-night live musical performances as well as unique intimate behind-the-scenes moments captured throughout their time in Cuba. It is a dream-like portrait of this legendary band’s first experience in Havana and of the magical exchange between musicians from the two cities each call home and their intertwined influence.

A 40 year dream come true, the iconic band was invited to perform as part of a cultural exchange through the Cuban Ministry of Culture. The 4-day event dubbed ‘Blondie in Havana’ was a one-of-a-kind experience that included two career-spanning sets and brought the band’s prolific catalogue to Cuba for the very first time.

“We had wonderful Cuban musicians join us for the performances – vocalists, percussionists, horn players – they added a terrific level of excitement to our songs. On ‘The Tide Is High’, Síntesis vocalists Ele Valdés and Maria del Carmen Avila sang with me and did the original harmonies that John Holt had put on the song, it was incredibly beautiful. Latin music has always been part of the feel of New York, so it was amazing to finally be able to put a very personal touch on the heartbeat of Cuba. VIVA!” notes Debbie Harry.

“This was a great opportunity to experience the sights and sounds of Cuba. It is such a beautiful and friendly country. There is so much appreciation for art, music and nature. The Cuban people have a joy for life, and it was amazing to experience that first hand,” added Clem Burke.

The Tide is High is probably my least favourite of Blondies singles but this extended live version is absolutely phenomenal.  It mutates into Groove Is In the Heart and becomes a dub-jazz-improv masterpiece lasting eight and a half minutes and is still too short!

Rapture lasts nearly ten minutes and is even better – guitarist Kessler playing a blinder with his six-string pyrotechnics and Debbie on top form with a cool, measured delivery. It segues remarkably into a cover of Fight For Your Right To Party.

Wipe Off My Sweat (from the Panic of Girls album) is very Latin, sung in Spanish and perfect for Cuba – in a coals to Newcastle kinda way.  Again Kesslers guitar solo is majestic, almost John McGeoch-like.

Long Time (from Pollinator) has been noted for its ‘deliberate similitude with Heart Of Glass’, but nonetheless is a perfect piece of ‘signature’ Blondie,

And there is a version of Dreaming (which they haven’t shared online yet – so it must be something pretty special.)

Blondies press release ends with this – a perfect summation, other than omitting to say this is a band who are universally loved, have been for a long time and always will be.

For the last four decades, Blondie has become and still remains a true global icon; one whose influence both shaped and continues to inform the worlds of music, fashion and art. From an irreverent Lower East Side punk outfit to bona fide international ambassadors of New York cool, Blondie will forever be synonymous with that punk spirit that lives somewhere in all of us. Their chart-topping success, fearless spirit and rare longevity led to an induction into the Rock ‘N’ Roll Hall of Fame in 2006 and more than 40 million albums sold worldwide to date. As we look back at the band’s storied career, it makes Blondie’s current vibrancy that much more stunning after 40 years of entertaining all of us.

Blondie. Same as they ever were. Simply the best.

Buy / Listen to the EP here.