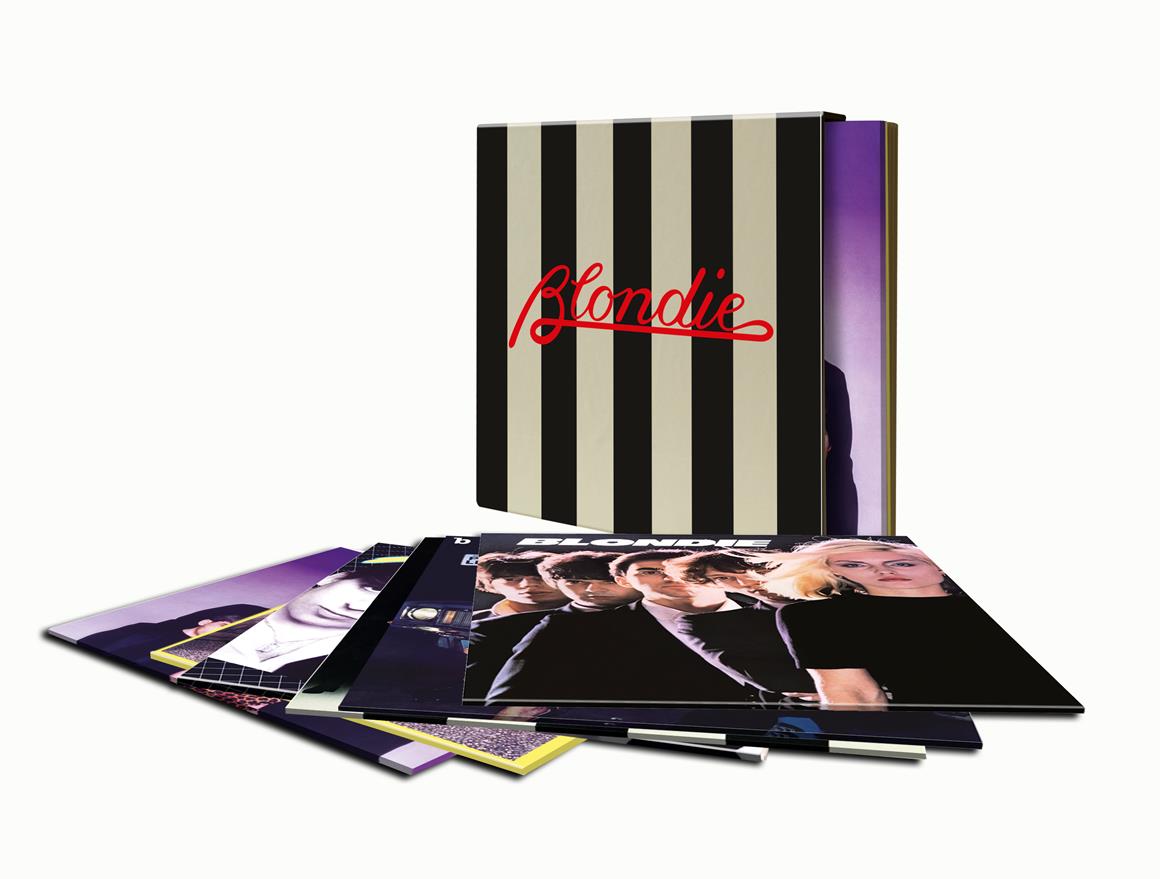 Blondie’s studio LPs originally released between 1976 and 1982 brought together in a boxed set for the first time. Each LP will have exact reproductions of original artwork to retain authenticity, and will be pressed 180 gram heavyweight audiophile vinyl and contained in a rigid slipcase box.

This could possibly be the easiest set of reviews ever. It’s Blondie. It’s the first six albums on vinyl. What’s not to like?

I would happily make the assumption that most, if not all, LTW readers are familiar with these. If not, you need to go and have a strong word with yourself.

Blondie were, in the first flush of the NY new wave, the band-least-likely-too, the whipping boys (and girl) and something of a laughing stock. The musicianship of Tom Verlaine’s Television, Patti Smith’s Rimbaud-referencing warrior-poetry, the blitzkrieg of The Ramones and the art-pop of Talking Heads were all seen as  head and shoulders above Blondie’s first faltering steps and many critics and fans saw them as little more than a vehicle to exploit Debbie Harry’s silver screen charisma and drop-dead good looks. Guess who had the last laugh?

Eponymously titled debut, Blondie, was originally released on Private Stock Records and bombed; Chrysalis saw the potential and released it again later in 1976 and an icon was born. Original bassist Gary Valentine contributes much of the material and the album’s crossover of sun-kissed pop and NY street sleaze was a winner. Incidentally, Valentine’s book “New York Rocker” is well worth a read for a somewhat different take on early NY punk than that normally touted. Blondie, even this early on, have only the most casual relationship with the burgeoning punk scene; Sixties girl groups, Brill Building classicism and bubblegum pop colour the album and it’s a startling, energy-filled opening salvo. Rifle Range and Kung Fu Girls show Harry’s mastery of the street-smart, sassy persona that sent a billion spotty boys into paroxysms of hormonal confusion.

Plastic Letters, from 1978, sees more of the same but better. The group have honed their sound, even after Valentine’s acrimonious departure and the barbed, twisted pop sees the writing of Chris Stein come even more to the fore. Youth Nabbed As Sniper is a classic example of Blondie’s expanding confidence married to their kitsch-y take on accelerated pop. Clem Burke’s furious, explosive drumming is the bastard child of Keith Moon throughout the albums. Apparently Harry and Stein hated his style; all those fills. rolls and snapping double-hits which fans loved were anathema to the principal pair. There’s a tale that does the rounds from one of their early engineers which asserts that Burke’s timing was all over the place and Stein wanted a session man for recording. Thankfully, that never happened. Witness (I’m Always Touched by Your) Presence Dear for prime-time Blondie (and Burke) at their imperious best.

Parallel Lines was the multi-platinum, chart destroying behemoth, also from 1978. I doubt many groups could match that for consistency. It’s virtually a greatest hits/singles collection given the amount of chart-botherers on it; Hanging On The Telephone, Picture This, Sunday Girl, Heart Of Glass are all on there and the surrounding tracks are just as good. Fade Away And Radiate and 11.59 are among the finest tracks committed to vinyl in that (or any other) era and the fact that this was such a popular record shouldn’t take away from the fact that the willfully odd songwriting and kitchen sink drama in the grooves is as experimental as it is accessible. If only pop music was like this nowadays.

Eat To The Beat, from the following year, juxtaposed a lot of what had made Parallel Lines so good with a hint of the urban blues and gnawing angst that seemed to be characterizing not only the city that birthed them, but relationships amongst the band. Harry and Stein had always been a united front and the other band members had been satellites around their planet to an extent. The whole “Blondie is a band” thing was becoming more of a strain as Harry’s star rose in conjunction with their success. Nonetheless, Eat To the Beat is another triumph, birthing more hit singles (Atomic, Union City Blues, Dreaming) as well as adding funk and reggae textures to the already winning formula.

Autoamerican, despite being another chart hit, is something of a wild card. Opening track Europa is mostly instrumental and blends orchestral textures into the mix. Harry recites poetry over the outro and one wonders if they were attempting to dislodge the pop audience. Recorded mostly in LA, it was something of an alien environment for a band so steeped in the sidewalks of New York. The reggae/ska influence of ETTB is continued in the Paragons cover (and huge hit) The Tide Is High and the awakening NY hip-hop/rap scene is acknowledged in Rapture. Here’s Looking At You and to a lesser degree, Faces, have jazz and skiffle influences but the typical Blondie sound remains on songs like T-Birds.

The Hunter from 1982 is the last Blondie album proper. As something of a commercial disappointment it heralded the impending end of the band until the reunion in the late 90’s. Having only one proper hit (Island Of Lost Souls) tells it’s own story but Beatles/Stones tribute English Boys and For Your Eyes Only (an unused Bond soundtrack cut) retain some of the verve of old. Ending with Smokey Robinson’s The Hunter Gets Captured By The Game is a bold move but it doesn’t quite have the snap and drive of previous cover versions attempted by Blondie.

There’s little more that needs said about this set. Classics all in their own way. Xmas present anyone?

Blondie can be found at their personal website: Blondie.net, as well as Facebook and Tweeting as @BlondieOfficial

All words by Joe Whyte. More from Joe can be found at his Author Archive.