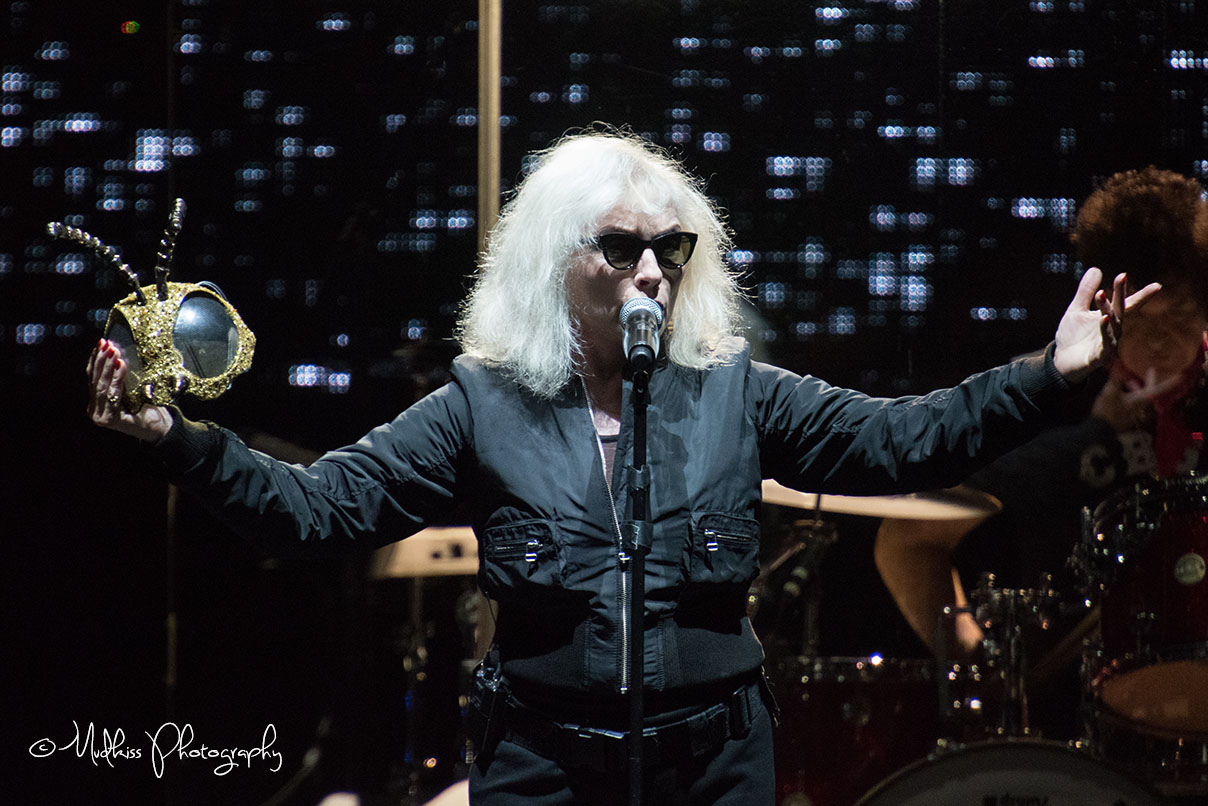 The past met the future as cultural icons ‘Blondie’ tore the roof off Manchester’s O2 Apollo in a gig that can only be described as a coming together of the old and the new. Louder Than War reports back in words and photos.

The excitement in the Apollo is palpable as Blondie return to Manchester for one of eight UK dates on their Pollinator tour. Whenever you are fortunate enough to see a legendary act in the flesh, there is always that niggling doubt that they won’t live up to the expectations that we place on them as artists who achieve an almost superhuman significance. As I suspect was the case with many others in the crowd that night, Blondie are a band that have always played a huge part in my formative years, but are also a band that I never thought I’d ACTUALLY see. And so, despite the general buzz and anticipation, I can’t help feeling slightly nervous that finally seeing them live would somehow shatter the illusion.

The second that the band sauntered onstage followed by their iconic frontwoman in true disaffected, Debbie Harry fashion, my anxieties were replaced with total awe. Wearing a glittering bumblebee mask, climate change was first on the agenda tonight as Debbie briefly greeted the crowd before turning her back on them to reveal the words ‘STOP FUCKING THE PLANET’ boldly scrawled across her jacket. Launching straight into ‘One Way or Another’, it’s clear that at age 72, Debs has still got her fingers firmly up to the man. For a band that have been around for the best part of 40 years though, Blondie don’t look like tired old dogs who’ve been around the block a few times- they look energised and still as effortlessly cool as they ever were. Every single member is on form. 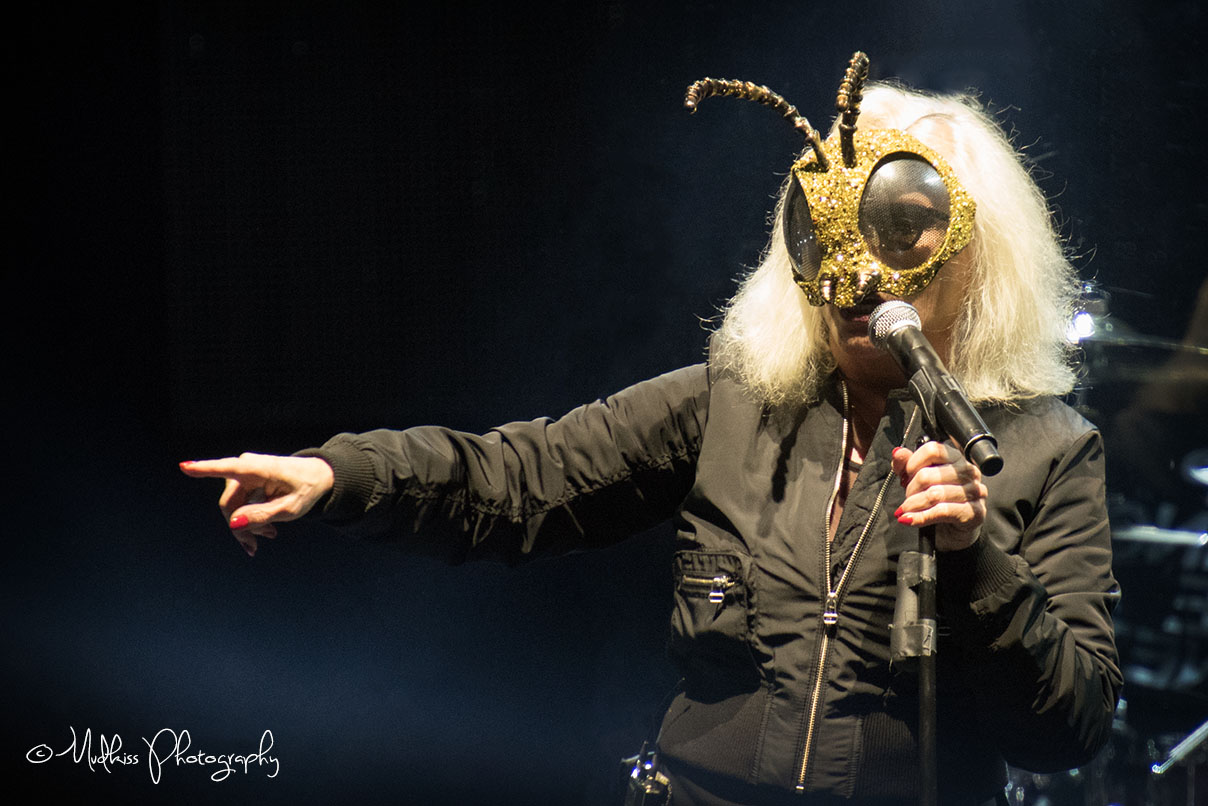 Despite the fact that the band’s line-up has had it’s fair share of shake-ups over the years, Debbie Harry, Chris Stein and Clem Burke firmly anchor the band in their iconic past, whilst Tommy Kessler, Leigh Foxx and Matt Katz-Bohen somehow look like they’ve always been there; this doesn’t feel like a half-arsed effort to flog a dead horse, but feels like new life has been injected into the band. A similar story is told by the demographic that make up the audience tonight. Many in the crowd have been there all along- seasoned fans who last saw Blondie at the height of their fame. But, there is also a fair sprinkling of younger fans who, like me, would be inducted into the family for the first time. 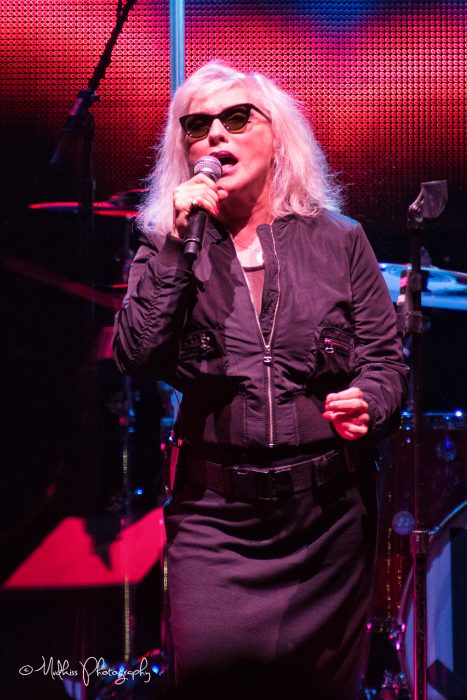 In a set that pays homage to their classic tracks, whilst still drawing attention to latest album “Pollinator”, ‘One way or another’ is followed up by ‘Hanging on the Telephone’, and then recent single ‘Fun’ slides seamlessly into ‘Call Me’— Blondie appear to straddle the past and the future effortlessly, retaining the sound that made them iconic without becoming obsolete in the process. After nailing ‘Rapture’ in spectacular fashion, the set is interrupted by covers of The Beastie Boys, ‘(You Gotta) Fight for Your Right to Party’ and An Unkindness ‘Fragments’, then Debbie talks about stepping out of the time machine and joining us in the present—But the truth is that the band still appear as current as they ever were. This doesn’t feel like something my parents would enjoy listening to—other than a few give-away wrinkles, I could be watching a brand new band.

It’s clear that the crowd are here to witness Blondie play their own tracks however, as a slightly toned down rendition of ‘Maria’ prompts a huge singalong from the overawed masses. Despite sounding slightly more mature, Harry’s voice is impeccable and still retains its unmistakable tone. Following ‘Too Much’ and Long Time’ from “Pollinator”, the band bursts into the iconic intro to ‘Atomic’, which is the highlight of the gig . For me, ‘Atomic’ is Blondie’s defining tune and one of my all-time favourite tracks, so hearing it live was really something else. Politely standing aside to allow Tommy Kessler to do his thing, Debbie looked on whilst Tommy treated the crowd to some phenomenal guitar solos which left everyone in a sweat. Finishing the main set with ‘Heart of Glass’, the audience is on a high and are already demanding more as Blondie exit the stage. 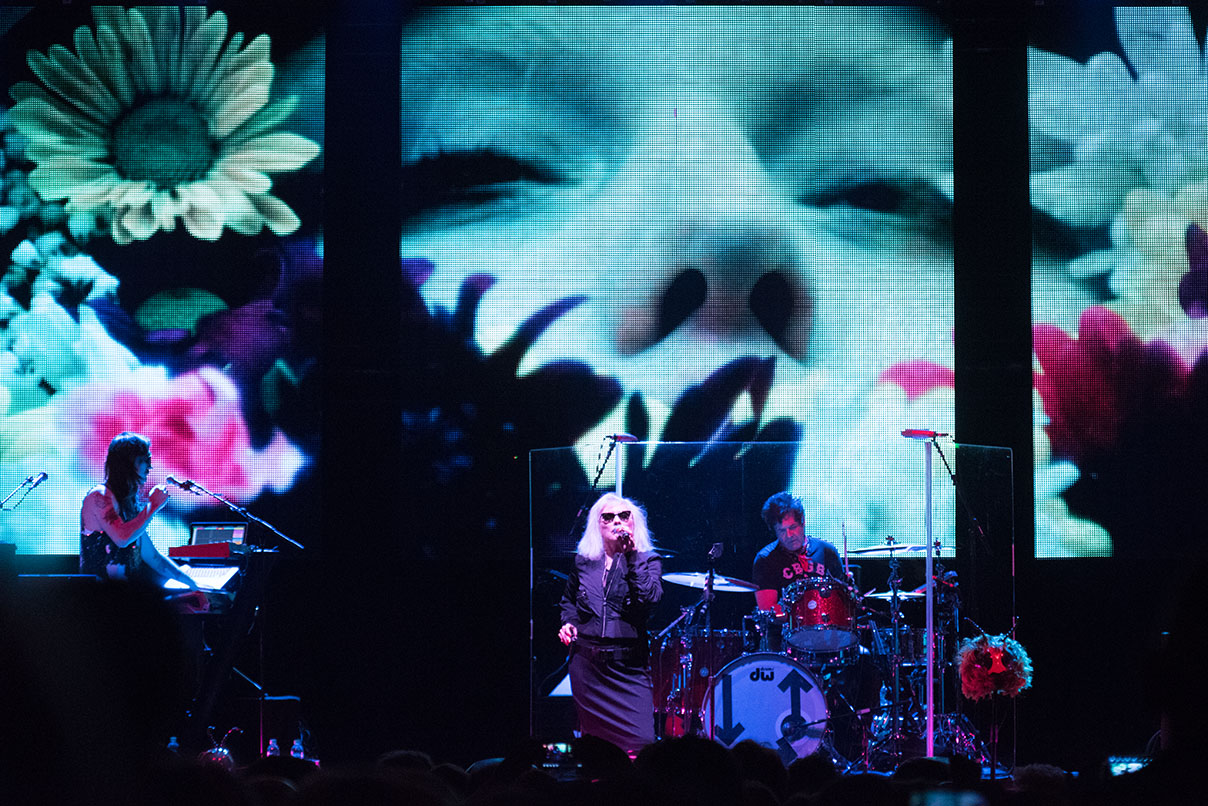 Returning with an encore which included ‘Fade Away and Radiate’, ‘Union City Blue’ and ‘Dreaming’, Debbie thanked the crowd for their continued support throughout the years and the band left for the final time. Although the crowd are collectively beaming, I can’t help thinking that Atomic should’ve been saved for the end for an almighty finish, but ultimately this is a minor detail because the entire gig is glorious from start to finish. As though it needed proving, Blondie are not the relic of a by-gone era, but are still as delightfully relevant and resonant as ever before.