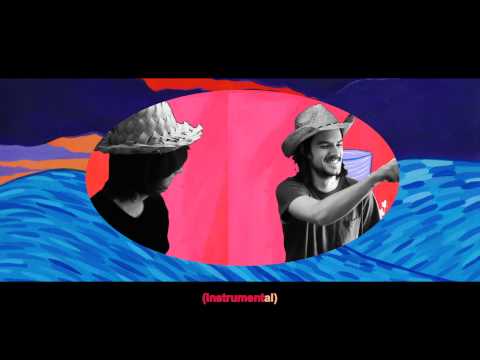 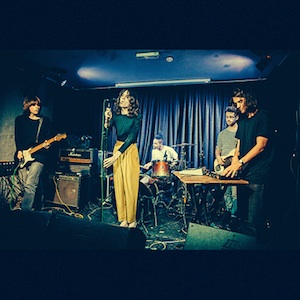 Keith Goldhangar lost a friend but found his next favourite new band whilst checking out Blonde Bunny at The Macbeth a couple of weeks ago. Check out for why below.

My mate stood here tonight describing this as a load of old hippy nonsense, punched me on the nose and buggered off to a Thursday night disco. Actually the words “Hippy bollocks” were used and the conversation ended “it’s not me, it’s YOU !”

Meanwhile I, with a few other people, stood transfixed, nodding our heads, tapping our feet and imagining that one day we’ll be standing in a similar or even the same establishment watching scores of floppy haired youths going ape-shit ‘arms in the air’ bananas and hailing these the best fivers worth of entertainment anyone could hope for on a school night.

When Blonde Bunny find their groove they’re fantastic. The elders in the room are transported back to that Prince gig at the Lyceum back in 1981 where if anyone had told us what the world would be like in thirty years time we’d have probably punched our friends ourselves and changed our drugs of choice. When the groove goes missing from a Blonde Bunny tune it’s not that anyone needs to send out a search party or anything because you can see by the body language of these five young men, with their floppy hair and floppy hats, long guitar solo’s and dance rhythms, that they’re all way ahead of the pack, in charge, know what they’re doing and to hell with the rest of us.

I’d like to think that the bits of their set this evening that I simply didn’t understand (but still managed to maintain my ten yard stare and leg shaking enthusiasm) are bits, like the two tracks filling the ears via our laptops “A Rate” and ” How do you cope, hope?” that will simply be just as exciting once I’ve put the hours in. Simple gratification after a first listen this band is not.

And that’s always worth applauding I reckon.

Blonde Bunny have long songs that you sometimes wish were longer. They’re like one of those bands we watch and chuckle at late at night after we’ve found BBC3 and had those discussions about why Bob Harris was always preceded by the word “Whispering”. At one point this evening I’m sure the world turned black and white as we felt like camera-less cameramen (and women) hanging around set on “The Old Grey Whistle Test”.

We watch a long haired young chap playing the longest guitar solo’s heard this year that begin at the beginning and end at the end of each song. A keyboard player who by the end the gig threatened to do a handstand, but his body movements appear to be on a loop as he remains on his feet and hails the drummer in front of him. A booming bass that holds most of this together and a vocalist that … well, he’s got the voice that’ll annoy the hell out of you until you’ve managed to put those listening hours in and reached the point of no return and realise that this voice is massive, distinctive, it’ll annoy some, but so will any band showing the originality and confidence that is on display here. Surely I’m not the only one walking around the kitchen late at night singing to myself…

“How can you hold on to something so beautiful…?”

Such a marvellous way to begin a song.

It’s taken a while for some of us to understand what Blonde Bunny are attempting and actually achieving and now a few of us are hanging around whilst waiting for the rest of the world to catch up, or as my mate proved tonight, simply bailing out before the going gets tough.

This is a rather unique outfit and unique is what drives some of us to go searching these rooms around here to seek out. There’s only so many times a grown man can watch and listen to a bunch of people whose record collection you could probably guess the contents of, but to stand in a room more than once in front of an ensemble like this and ask yourself “who the fuck else do I know in this world who are going to agree with me on this one?” must be onto a good thing surely ?

Blonde Bunny can be found on Facebook. Also worth checking out their Bandcamp. They tweet as @blondebunnyband.