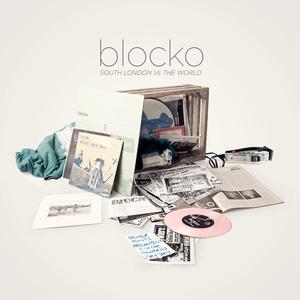 Three blokes walk into a pub, pick up some instruments and bash out some melodic pop-punk…

A solid rhythm section of drums that are being properly bashed and a nice “woody” sounding bass over which is laid an almost dischordant trebley guitar.

Often compared to Leatherface,Hot Water Music and Broccoli (as Sean Forbes says on the liner notes “Blocko weren’t called Brocko for no reason.  They did sound like Broccoli!!!”), and reminiscent of others who went before them, Blocko churned out some solid sounding pop punk tunes with a little more attention to the individual strings on the guitar than your average power chord veteran – which I think is the source of the Leatherface comparisons.

The vocals have a haunting, almost mournful sound but the music is uptempo which gives you a counterbalance.  I have always associated Blocko with the likes of Southport – pop punk with a slightly melancholy feel yet somehow cheerful at the same time. Maybe it’s the London connection and three blokes who look like they just happened to be in the boozer casually picking up instruments and then rocking out.  Maybe it’s the tempo.  Maybe it’s the fact that in the late ’90s and early 2000s these bands seemed to play fairly frequently on bills my own bands shared or I was otherwise involved in?

Blocko always stick in my mind for another reason.  On arrival at one of their gigs at the sticky-floored Joiners in Southampton, Blocko drummer Mates wandered up and said “Alright, Tony”.  Me: “What?”  Mates: “You’re Tony, aren’t you?” Me: puzzled look.  Mates: “From Suspect Device?”  At this point I had to explain that there was more than one bloke in our town with a shaved head who turned up with a record stall to gigs.  From then on, whenever I saw him, which given that they were a band who were FROM the scene not FOR the scene might include occasional trips to London to see the likes of Propagandhi or Manifesto Jukebox, I would proffer my hand and say “Pleased to meet you, I’m Tony”.  At which point he would look as embarrassed as he had on the day he made that mistake.  That is, unless he saw me coming in which case he’d grin sheepishly as he tried to avoid me.  Well, Mates, the story is back to haunt you again: and this time in print!

This restrospective collection’s title “South London vs The World” was inspired by the travels of this Croydon Trio to Japan, North America and around Europe.   They have also neatly themed the content – CD1 being recorded in South London (the original demo, Oimo mini LP and tracks from a number of split 7 inches) and CD2 featuring alternative mixes of the “Edmondson Ave” LP recorded in Baltimore (yes, The Wire Baltimore, not the Baltimore in West Cork) with Strike Anywhere’s Matt Smith and some live tracks recorded in Belfast.

For a limited period, if you order this release direct from Boss Tuneage you also get a free DVD.

All words by Nathan Brown (not Tony). You can read more from Nathan on LTW here.