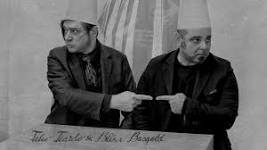 This is a gig worth getting excited about…

Einsturzende Neubaten singer Blixa Bargeld and Italian composer Teho Teardo will be bringing their brilliant ‘A Quiet Life’ album for a one of gig in the UK at the Union Chapel in London on March 18th.

Tickets are available from seetickets.

The album is quite special combing Blixa’s eccentric and brilliant world view, lyrics and voice with Teho’s string arrangements and was one of last year’s best releases.

This is a quite unique collaboration, an unexpected one between the italian composer Teho Teardo and Blixa Bargeld, leader of Einstürzende Neubauten and former Bad Seed. They first met 2009 during the realization of „Ingiuria“, a theatre pièce and right after that they collaborated on a song for a soundtrack, “A Quite Life”.

That song started the whole process of writing and producing an album together where songs and more experimental pieces could find a common ground.

The original use of strings: cello, violin, guitars, a full string quartet diverts the traditional perception of those classic instruments when they deal with electronics and the result is emotionally moving.

The album has been written and recorded between Berlin and Rome, it took nearly two years to be made, Teho and Blixa worked next to each other choosing carefully every sound, every word and silence.

There are 12 songs on Still Smiling, including a new version of A Quiet Life and a cover of Alone With The Moon by The Tiger Lilies.

Amongst collaborators there are The Balanescu Quartet and cellist Martina Bertoni.

Lyrics are visionary and are sung in english, german and italian, Blixa reveals a really personal and intimate side to the listener this time.

Still Smiling is an album whose special vision covers all the sky between Rome and Berlin, daytime and nocturnal.
This is what Ennio Morricone had to say about Teho’s music:

“Experience tells me that sooner or later those who seek will find and in the passages between searching and finding there are important moments, moments such as the ones we hear on this beautiful album.” – Ennio Morricone

European Tour Dates for Autumn 13 will be announced soon !

Blixa Bargeld was born 1959 in West-Berlin. As an autodidact he is working as a singer, writer, composer and director.

He was the guitarist in “Nick Cave and the Bad Seeds” for more than 10 years and is the head and founder of “Einstürzende Neubauten” since 1980.

He is currently residing in San Francisco, Berlin and Beijing.

Teho Teardo – musician, composer and sound designer is the most important italian soundtrack composer, Ennio Morricone greeted him like someone special.

Collaborated with artists like Wire, The Balanescu Quartet, Girls Against Boys and many others. He’s done several albums, theatre pieces. Lives in Rome.