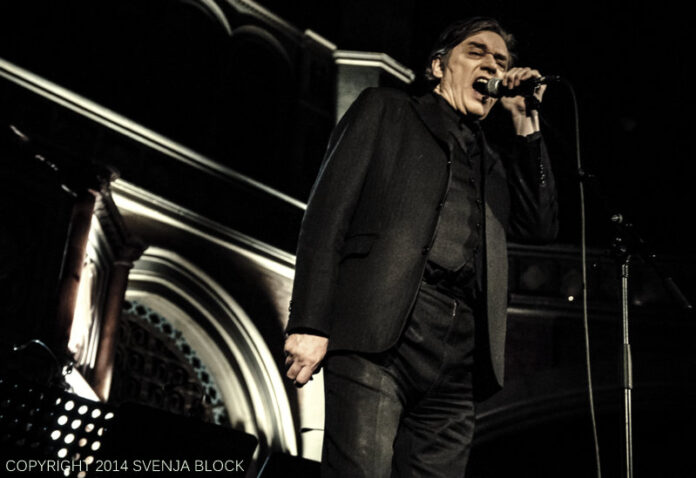 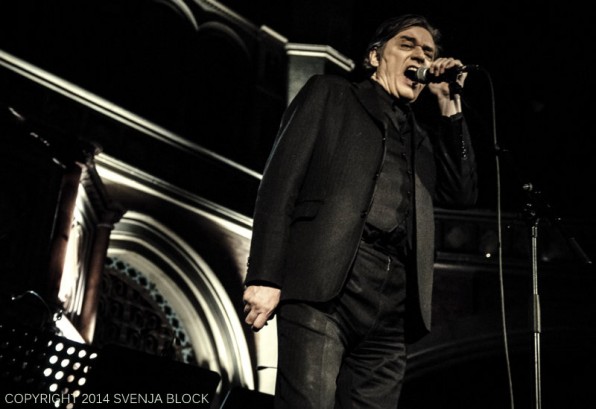 There he is, the master collaborator Blixa Bargeld – the heartbeat of the genius Einsturzende Neubaten and the musical documenter of the last days of cold war Berlin and the new Germany beyond, the man who put the bad seed into the Bad Seeds and owner of a limitless imagination and brooding eccentric presence on the European music scene for decades.

He stalks the stage, dressed in black with his hands expressing a universe of emotions and his extraordinary voice swooping in all directions from a whisper to a scream, tall and imperious he delivers his wild-eyed poetry with the intensity and brilliance of a story teller who can describe heaven and hell and is dapper as ever in a 3-piece suit that is a thousand shades of black.

Tonight he is one cog in his current project – a remarkable collaboration with Italian composer Teho Teadro and it’s a stunning affair.

They first met working on a theatre production of Ingiuria, and then they collaborated on a song for a soundtrack called A Quite Life – that song kicked off a whole album of material that was built around strings, cello, violin, guitars and a full string quartet. It was an emotionally powerful album, full of wry humour and clipped observations, and it was one of the best releases of 2013. 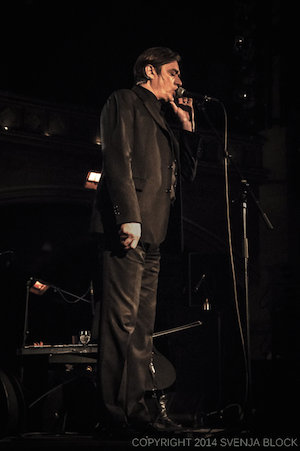 The seductive, beguiling yet darkly disturbing album is showcased perfectly in the Union Chapel where the music oozes its European pulse with Blixa’s multi-language command. They criss-cross the European community celebrating the melancholic grandeur of middle European neo-classical with an added smouldering sex and liquid darkness that is underlined with lines like on their song, Mi Scusi, where Blixa intones ‘can I kiss in another language?”.

This is an exploration of music from a European perspective- this is not the blues that he is singing but a modern European take on its own past- a modern classical with soaring and dramatic soundscapes and the clanking crackling undertow of electronic beats with Teho as the master of the controls along with cellist Martina Bertoni adding a droning fog of bowed heart string brilliance even with a broken string on her instrument.

Teho is one of those multi-instrumentalist guys who seems to create broad vistas of sound and atmosphere from the starkest of pieces. With a b….. guitar he utilises its bass frequencies for deep ebowed drones and a twanging darkness- like the sound track to a moody film you always wanted to see that is dripping in melancholy and life. There are bells and tape loops and a laptop full of crackling electronics that lock in with the voice and cello like a 21st century classical chamber quartet.

This is a European music full of beauty and possibility and the perfect backdrop to Blixa’s songs and lyrics that he delivers in that unique voice that seems so capable of so many textures and moods.

Long gone is the ‘most destroyed man on the planet’ Blixa of the early Neubaten era – the mad-eyed screamer dressed in distressed rubber and angry codpiece with the exploding hair who delivered those unearthly screams over the clanking Marshall metal percussion of the Berlin renegades.

Then it was on a knife edge of danger and the band looked set to implode at any moment with Blixa himself lining up for the most intellectual rock casualty burnout of all time. The singer combined an obvious high intelligence with a certain amount of artful depravity in a tightrope walk of fascinating extremes and that as part of the thrill of the collapsing new Germans along with the beautifully constructed chaos of their music.

These days the dapper singer still retains the ability to shock and surprise with his voice – he still does that haunting inwards scream thing and his voice can switch from a whisper to growl with ease as he delivers his poetry in several different languages from German to English and even to impeccable Italian. The music may be less abrasive than the early Neubaten but its emotional reach is just as extreme and yet there is humour like on the childlike glee of Axolotl or the Mae West referencing Come Up And See Me that sits neatly with the aforementioned Mi Scusi or a stripped down version of late sixties classic Crimson and Clover as the perfect chamber music from hell.

Beautiful and dark, fragile yet bold the beautiful contradictions pour out of a hypnotising set of musical ambition and genius that references a past whilst detailing a future.