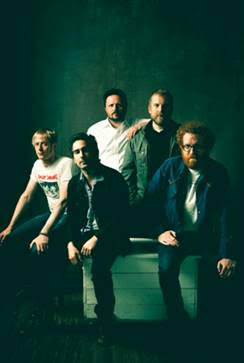 The Portland based outfit finally make their way back to the UK after a six year absence. Louder Than War’s Craig Chaligne reviews.

Having released their excellent eighth opus “All Across This Land” on Lojinx last October, Blitzen Trapper have just embarked on their first European tour in six years. After a great opening set from Nilufer Yanya, london based songstress displaying ethereal vocals and atypical chord progressions, the band sauntered on stage with frontman Eric Earley greeting the crowd in a charmingly laid back manner.  Unsurprisingly the set-list from this sell-out gig at The Lexington featured many tracks from their latest and was all the better for it as it is a great record (check out our review of it here). Starting with the rock’n’roll stomper “Rock’n’Roll (Was Made For You) followed by the breezy “Nights Were Made For Love”, the band showed they have mastered the art of writing songs that sound like classics of the American Rock’n’Roll songbook. The swampy southern rocker “Big Black Bird” and an excellent cover of Neil Young’s “Old Man” changed The Lexington into The Winterland on Thanksgiving Day 1976. The excellent “Texaco” from their self-titled LP was followed by the bluesy “Fletcher” from 2011,s “American’s Goldwing”. “Let Your Love Grow Cold” and “Lonesome Angel” proved that the band can also hit all the marks in a a more subdued register, the band kept working as an ensemble for the whole of the gig, everyone playing solidly but without ever trying to steal the show. Earley and guitarist Erik Menteer flexed their muscles on the quasi-prog rock epic “Thirsty Man” and Drummer Brian Adrian Koch splintered the wood from his drumsticks on the outro of “All Across This Land”.

The band came back for a three song encore with an a wonderful version of Townes Van Zandt’s “If I Needed You”. “Lady On The Water” and “Fire and Fasts Bullets”, both from their landmark LP “Furr”. The band are touring in Europe till the end of this month.