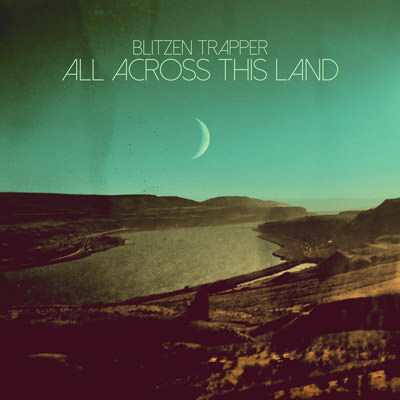 Blitzen Trapper – All Across This Land (Lojinx)

Portland based Blitzen Trapper released their 8th studio album last year and are about to embark on a European tour next month. Louder Than War’s Craig Chaligne belatedly reviews it.

Blitzen Trapper have reached the 13 years mark which is quite an achievement. Having started ou under the Garmonzokia moniker in 2000, the band changed its to Blitzen Trapper in 2003, reportedly a reference to singer Eric Earley’s seventh-grade girlfriend, who kept a Trapper Keeper binder and drew pictures of Santa Claus and his reindeer on it, her favourite reindeer being Blitzen. The band haven’t slept on their laurels since then, clocking up 8 studio albums in the space of 13 years to which you can add 2 live albums. This new album picks things up where they left them on the last track from their previous album VII entitled “Don’t Be A Stranger”. This tune was a classic slice of american songwriting and most of the albums takes after it. However the band seems to have made a conscious to move towards a rockier and more radio-friendly sound and if this might sound at first like a bad idea, the result turns out to be a total success. What we have here is an excellent classic rock album with great songs. The opener “All Across This Land” with its insistent riffs is pure Southern Rock while the second number “Rock and Roll (Was Made For You) sounds like a lost Raspberries outtake. Far from being a succession of heavy rockers, the record features some more nuanced moments like “Mystery and Wonder” with its infectious chorus or the country stylings of “Low Grow Cold”. “Lonesome Angel” is pure Neil Young with layers of Violin embellishing the choruses. The breezy “Nights Were Made For Love” features some clever synths that at first glance seem to jar against this classic pop song that would have made Tom Petty proud but then you realise that they are an integral part of the songs charm. The production work is great with none of that over-reliance on effects that populates the charts nowadays. The band relies on the quality of its songs and it is no mean feet to write memorable material in that style as it has been lets face it a well trodden path. Another kudo for the LP is its brevity, just 10 songs, no tracks just for the sake of filling all 80 minutes of the CD.  “Let The Cards Fall” could almost be mistaken for a Graham Nash song (reminds me a lot of “Wated on The Way” from Crosby Stills and Nash’s “Daylight Again” LP. The record finishes with the folky lament of “Across The River”.

Blitzen Trapper will be touring Europe next month: