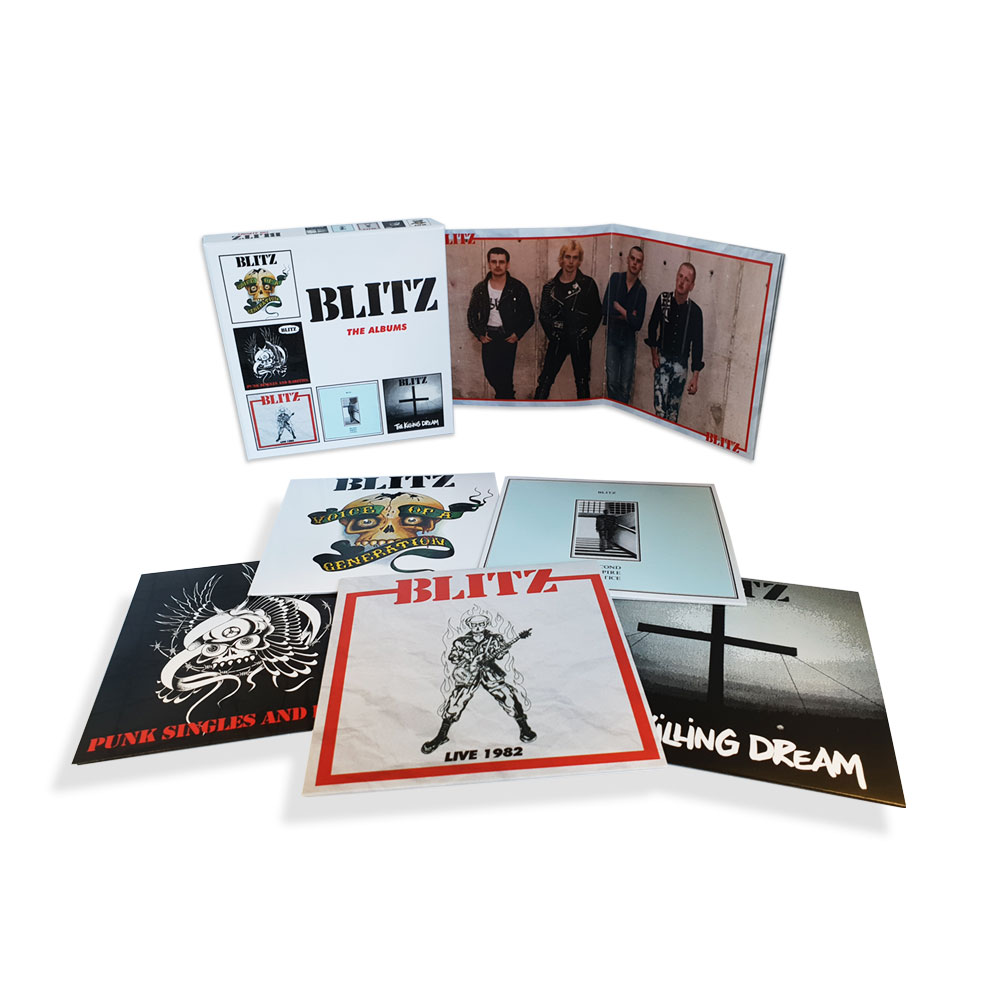 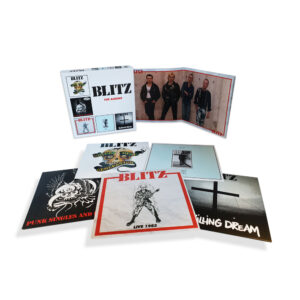 Boxset containing the three studio albums recorded by New Mills Punk legends Blitz, along with one disc bring together rarities and singles and another with two live performances from 1982…..Ian Canty remembers one time, long ago, when the band were at the very pinnacle of the Punk scene, if just for a moment…..

In many ways Blitz had the archetypal Punk career. The original band recorded some rough and ready, but classic, early singles and a great debut LP (though somewhat lacking in oomf in the production stakes). Then that line-up splintered while seemingly at a highpoint, with key members leaving. A reconstituted version of the group then issued a follow-up which bewildered most of their original fanbase and they then split for good, a dodgy comeback later on notwithstanding.

But for a while Blitz were the very best Punk band this country had to offer. When the Voice Of A Generation album was released, I remember playing it and thinking that at long last the early 80s Punk scene had come up with a long-playing record to be reckoned with. Some bands’ singles had promised much (particularly the Violators’ excellent two also on No Future), but no-one had really come up with anything like this. They deservedly cracked the Top 30 album chart and a bewildered Peter Powell had to play them on the Thursday night run-down show on Radio 1. Just for a moment they were top of the tree.

Blitz formed in 1980, based in the town New Mills in Derbyshire. The original line up featured Carl Fisher on vocals, guitarist Alan “Nidge” Miller and a rhythm section consisting of drummer Charlie Howe and Neil “Mackie” McLennan playing the bass. Some demos from their first year are featured on the Punk Singles And Rarities collection, the second disc here. Escape sounds a bit like the Jesus And May Chain four years early! It’s the drums I think, apart from that the remaining 4 songs have plenty of fire, dry runs for the album two years on (the actual LP demos from 1982 themselves sound a little on the rough side, but are good to have as part of the set too).

Their first actual record was the All Out Attack EP, which was originally a self-recorded demo sent to the newly-established No Future label. Seeing no need to re-record as the powerful attack of the likes of Someone’s Gonna Die required no fine tuning, the Malvern imprint released it as their first vinyl offering and straight away it was a success. It sold enough copies make the higher reaches of the Independent Charts, a feat back then. The band went from strength to strength with the fine Never Surrender and Warriors 7″s and contributed Youth And Nation On Fire To the Carry On Oi! comp (all part of the Punk Singles And Rarities disc). When the album arrived in October 1982, Blitz were big news.

In 1982 this was probably my most listened to LP, but I hadn’t played it for some time prior to hearing it now. I was a little surprised how catchy it was, at times they were like a boot-boy version of the Buzzcocks or Undertones. The guitar did need to be a bit heavier, the vocals could have been a bit clearer in the mix and overall the production does lack a bit of the punch of the singles, but these are minor quibbles. It is still an ace of a record, streets ahead of most of the Punk crowd in 1982. It comes roaring out the gate with We Are The Boys and the classic Punk holler of Time Bomb. Voice Of A Generation pretty much never lets up from there on, bar a straightforward cover of Lou Reed’s Vicious.

Things quickly changed when Mackie left just after the album’s release, unwilling to tour. Tim Harris, who had produced Voice Of A Generation, joined to fill the gap on bass. Here is where a lot of the original Blitz fans got twitchy, with the release of the single New Age. I loved it, it sounded as they were building on their original sound and widening things out, very catchy but still tough. There was a hint of a Joy Division-style intensity which they would focus on later. Around this time they were interviewed on the Channel 4 music programme The Tube and playing their latest single, New Age. That the interview was conducted by some trendy bozo who didn’t have much of a clue what the band were about was a potent that the path to mainstream success would prove to be treacherous.

Nidge Miller was the next to quit and joined up together again with Mackie plus newcomers vocalist Nigel Beverly and Gary Bowler on drums to record a workmanlike version of Bowie’s Suffragette City under the sobriquet Rose Of Victory (both sides of the single are featured on the Punk Singles And Rarities disc). This was not a long-lasting union though and nothing further was heard from the band or the ex-Blitz pair for some time. Nidge, as we shall soon see, used the Blitz name again some time later. The now three piece Blitz considered a name change until re-emerging with their handle intact on the Telecommunication single and Second Empire Justice album.

Telecommunication in my opinion was a really good single, atmospheric with a strong chorus that draws you in. The trouble was, the original Punks and Skins who followed the band couldn’t make head nor tail of it and the Post Punk fans that might have lapped it up were probably put off by the Oi!/Punk associated with the name. Perhaps a few open minds on each side found something to treasure? Because while by no means a great LP (I have to admit I listened to it a couple of times on purchase in 1983 and then not again until years afterwards), Second Empire Justice has some interesting tracks and shows a good degree of promise.

A bright guitar line lifts opener Flowers And Fire, along with Acolyte it makes me think a little of PIL when they were good. Into The Daylight has a Motorik drum clatter and mines a similar seam to Clin Newman’s early solo work. The glacial Electro of H.M.K. Grey was a big leap from the Oi! sound of only a mere 12 months before, but is not unappealing. This disc of the boxset includes the last single under the Blitz banner, Solar, which is a bright piece of New Wavey Pop and also some decent 12 inch versions of White Man, Telecommunication plus a dance mix of Husk which is not as danceable as in its ordinary form (which is also present).

The band sometimes found the live environment troublesome (one famous gig at the 100 Club ended when Carl Fisher was bottled), but we get to judge for ourselves on disc three here. The first section is from an April 1982 No Future gig at the Zigzag Club. Sound-wise this is a bit on the rough side and the band have to cajole the audience into a reaction, but Blitz manage on the whole to showcase their songs well (apart from where Warriors judders to a halt, Fisher having forgotten the words). The second gig, of unknown provenance (though I’m assuming it is from later in 1982 because it features a version of the New Age single), is technically more proficient, but the vocals in particular are awash with echo, giving it an oddly sterile feeling.

The final disc is given over to the Killing Dream album. In 1990 Miller recorded this LP with ex-Attak leader Gary Basnett on vocals under the Blitz name. With Nidge playing all the instruments including a static sounding drum machine, it has the air of demos for a solo album, rather than an official release. Whilst the lack of any other original members does tend to void it, Basnett was a good choice as the rough and ready vocals he displayed on the Attak singles Today’s Generation, Murder In the Subway and Zombies album showed he more than fit the bill to sing with Blitz. Even so on many of the songs he sing-speaks, again giving the music the feel of a practice tape.

Yet the germ of a decent record is in there, perhaps not a bona fide Blitz album, rather more a good album in the style of Blitz, if you get my drift. Some songs are mere fragments really, with a bit effort Walk Away, Fade and All You Want could have been worked up into songs that were worthy of the name. The drum machine is a problem throughout, weighing down the better efforts with its syncopated plodding. On Those Days it sounds like they stopped the track halfway through to turn the damn thing on! Almost every tune commences with a guitar preamble before the electronic percussion starts, which means they do tend to merge into each other and a couple of pleasant but pointless guitar instrumentals don’t help.

After this nothing much was heard from any of the band for a long time, save for the odd rumour the original band were reforming to play Holidays In The Sun/Wasted/Rebellion. It never happened as sadly Nidge Miller was hit by a car and killed as he toured his latest Blitz line up in the US in 2007. Of the other members, none seem active in music at the moment apart form Mackie, who plays with the excellent Epic Problem.

Although The Killing Dream doesn’t exactly finish this boxset on a high, there is still a good amount of quality to this set. Voice Of A Generation is great, surprisingly melodic and spirited and the singles and rarities disc is good to have, with those early No Future sides never aging. The live selection is decent but a little more throwaway, but I liked Second Empire Justice far more than all those years back. It shows real promise that unfortunately was never fulfilled. The Killing Dream is a bit of a shambles really and galling because you can see with more effort it could have been a good-ish record. But it has to be present in a box that wants to bring together all the Blitz material.

It’s likely that most Blitz fans will have most of this bar the live selection, but if you’re lacking bits and pieces and willing to take the opportunity to reassess Second Empire Justice, well this set might well be for you. I enjoyed listening to it a great deal and at their very best Blitz were something very special indeed.