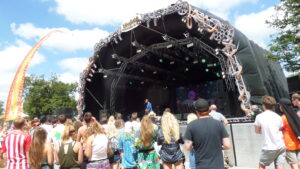 I remember going to my first tiny little Blissfields. It was the same year as my first Shambala and I hoped we could have something as interesting as Shambala in the South. I thought Blissfields may be able to grow into that. Now, four years on, I see that the black death of the festival has spread, and Blissfields is not the cure.

Swarms of middle class musclebound macho men aggressively stampeded under the watchful eyes of their alpha male leaders. Girls, mostly around 14-16 years old, shoved their latest festival fashions in the alphas gaze. Of course, a few of us crusty punks lurked around, attracted to the word festival like moths to a flame, but we were in an isolated minority.

It’s hard to say whether Blissfields can be blamed for the levels of bland drudgery and sludge that was going on when they put Akala and Beans on Toast on stage. But Blissfields didn’t supply any concious thought or critical thinking to anything. Sure, there was an animal preservation stall, but remember when festivals meant anything? Remember when weirdos, anarchists, punks, hippies and all the other sub genres of morlocks converged and talked about climate change, state oppression and raised, if nothing else, some awareness? Remember when festivals were a safe haven for the kids who were marginalised by the norms?

Akala was a very friendly face in a crowd and was happy to say hello to anyone who wanted a chat before venturing out for vegan food. He gave a lot to his performance, but it was almost confusing to stand at the side and watch him rap songs like “Don’t piss me off” to rich kids, who he openly mocked in his famous Fire in the Booth session. This was because rich kids took the song as being about having a bad day, as opposed to being white washed as a working class black male. It was strange and curious, but the crowd loved it, and presumably that’s what counts here. Akala will be continuing to tour festivals around the UK promoting the stellar Knowledge is Power Vol. 2, as well as putting on his  The Hip-Hop Shakespeare Company workshops.

Camping was pretty much as expected. Security were mostly focused on not allowing anyone to bring their own alcohol into the main site to the point of searching bags. Needless to say, what was gained in the saving on a ticket was lost when you’re buying booze at a festival bar. There’s much to say about the middle class dancing to KRS-One – ‘Sound of Da Police’ whilst hired security goons violate your space by searching your belongings for beer.

Comedy was the most dynamic part of the entire festival. Nabbing Southampton’s own Grant Sharkey was a dizzying peak for Blissfields, which was at this point clinging onto any remnant of soul. Sharp Sharkey performed with a hilarious and constantly provocative set of songs. Highlights include “I’m sorry to hear you’re a racist” and a deconstruction on our social system and economy via “Animal”. After hitting a stride, he dragged kids on comedowns who were probably just looking for a quiet tent to the field. Little did they know they’d be riled up with song as they picked up litter around the site in a feisty rabble. Sharkey was witty and he knew where he was, he knew his crowd, and most importantly, knew that he could and needed to impart something meaningful to them. Catching up, he told me “Art should say something. It’s really a fucking shame when it doesn’t.”

Other comedians who managed to keep things interesting were the freaky Spencer Jones and the oh so charming Rosie Wilby. One of the most harrowing moments in the tent came in the tall white figure of Mathew Bayliss, a ‘comedian’ who made weird Lad bible style jokes about 18 year old daughters and encouraged rampant homophobia and sexism under a poorly held ‘it’s fine this is a middle class caricature’ banner. When the Beastie Boys were raising awareness of violence and sexual assault against women at festivals during something as ridiculous and apolitical as the MTV awards in ’99, how can we tolerate a male in a festival encouraging it now?

Far more positively, the Teen, Tween and kiddy area was terrific. Full of bubbles, workshops and crafts, these were well stocked, well thought out and packed. It was great to see that tweens and teens were considered so well, an often ignored demographic. Blissfields managed to continue to assert itself as a family festival really well.

Something else that Blissfields has been ace at is finding lesser known bands and giving time to some real gems, previously in the form of the fantastic Wave Pictures, for example. This year, we had We Have Band, a London based funky pop group who were visibly well rehearsed. Finally satiating the gaping need for something vaguely heavy, Blissfields offered up steam punk dudes The Men Who Will Not be Blamed for Nothing. A furious few even managed to get a lovely little mosh going and stragglers were beaming to hear something full of vibrancy and noise.

Curxes from Brighton gave some hugely needed power to the women at the festival with their retro-esque, effortlessly interesting sound. Talent also came in the way of softly spoken Birmingham-based folk collective Boat to Roam, who were clean and sweet and your grandparents would adore them.

On the flipside of smaller finds was the man of the weekend, Grandmaster Flash. Once he used to breakdown the cycles and traps of forced poverty and crime. He would make trippy songs about cocaine. He made us think and dance. Now, he says “Everybody now”, “C’mon” and “Make some noise” whilst playing other peoples’ songs off a Mac. Obviously, the throngs of Cath Kidston loving punters were lapping it up, but it was actually an obscure thing to witness. Now, we all need to eat. I’m the most opposite thing to a capitalist as a human can be, but I don’t begrudge people needing to survive. This, however, was just abstract.

Maybe I didn’t have enough glitter on my face, and sure, I don’t have a grammar school education. No, this wasn’t Bloodstock, and yes, this was in Winchester. But I wasn’t expecting Rage Against the Machine mantras and radical action – I wanted any sense of meaning whatsoever, because it was a festival, and that’s what they’ve always conjured. I know Glastonbury is a thing and it’s horrible. I know Reading Fest costs about the same as a mortgage in Berkshire. I know that Q magazine recently referred to Kanye West as an activist and the whole world is in this Dr Seuss/George Orwell like state. But Blissfields was young. It had only two main organisers. I really thought it could’ve brought some balance to the force. Where will us weirdos thrive now the festival is dying?

All words by Leema Sadia. More writing by Halima on Louder Than War can be found at her author’s archive. You can find her on twitter as @MaceWindude.