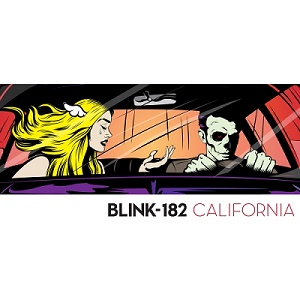 Former kings of pop-punk return with a new album and new member. Surrounded by controversy (at least within the pop-punk community) does it live up to its promise? Louder Than War’s Dave Beech reviews.

Growing up, the music of Blink-182 was never more than the press of a play button away from me. Yes, it was juvenile and simplistic and even at times, glaringly misogynistic, but to a ten year old on the cusp of puberty, it was music that opened doors and provided me with an identity.

Times and taste change. I grew older and Blink split up, a messy divorce which lead to side-projects, both well received and otherwise. The period that followed was turbulent for those involved and it was this point that I lost interest. My tastes changed further and even the inevitable reformation and 2011’s considerably matured Neighbourhoods did little reignite that original spark.

Why then, over fifteen years after first falling in love with the band, should the prospect of a new album be as exciting as it is? In short, it wasn’t. At least not at first.

Dogged by delays in recording and an ever-growing turbulence between members, the then-untitled eighth album didn’t really harbour any appeal further than mild curiosity. Then there were rumours, then speculation, then solid fact. Alkaline Trio’s Matt Skiba had replaced Tom DeLonge as the band’s guitarist and work began on entirely new material.

The resulting record is their strongest since 2001’s Take Off Your Pants and Jacket. Fitting in to the Blink cannon arguably far easier than the aforementioned Neighbourhoods, California builds on everything that made the band great in the first place, without getting bogged down by nostalgia. Skiba’s integration is effortless and is something that has allowed the band to move forward, creating an album that feels fresh and exciting, but first and foremost, vital.

Its release is undoubtedly going to be met with a certain degree of resentment from purists, but those that balk at the idea of a DeLonge-less Blink-182 record need only listen to the opening three tracks to know they’re in safe hands.

Cynical kicks off proceedings with two minutes of indentikit Blink instrumentation, though the introduction of Skiba’s vocal offers something a little more palatable than DeLonge’s idiosyncratic whine, while the previously released Bored to Death feels like a natural progression from 2003’s self-titled offering.

Though much of California feels familiar in a welcoming sense, there’s a maturity present too, something evident in an expanded palette of instruments as much as in the direction of the tracks themselves. Bored to Death for instance features subtle strings and synth, while Left Alone leans heavily on the latter. The strong emphasis on electronics is something else for which the band has felt criticism, but it’s worth noting that they were experimenting with synths as far back as 2003, and it’s only now that they feel a natural part of their make-up.

That Blink-182 have managed to successfully balance a legitimate energy and freshness with enough tropes to still feel like Blink-182 is impressive, and there isn’t really a bad song on the record. Sober has an unashamedly sing-song pop melody, likewise with the Good Charlotte-esque Home Is Such A Lonely Place, and there are a couple of occasions where the band veer into later-Goldfinger territory – something brought about due to frontman John Feldmann’s on production duties. These aren’t negatives however, and feel more like subtle references to the genre Blink-182 once dominated and are now slowly moving away from.

Both a love letter to the band’s home state and the experiences it afforded them, and a love letter to life itself, California is a record steeped in vigour and vitality. It understands that life is fleeting, and, for all its peaks, troughs, triumphs and near misses, is something to be grabbed by both hands.