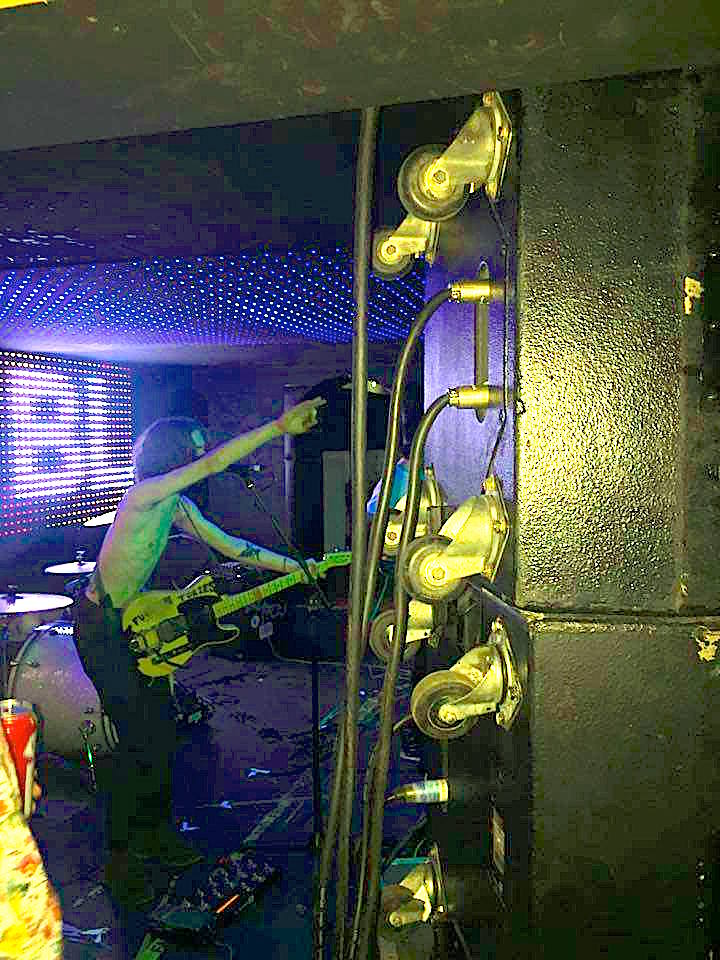 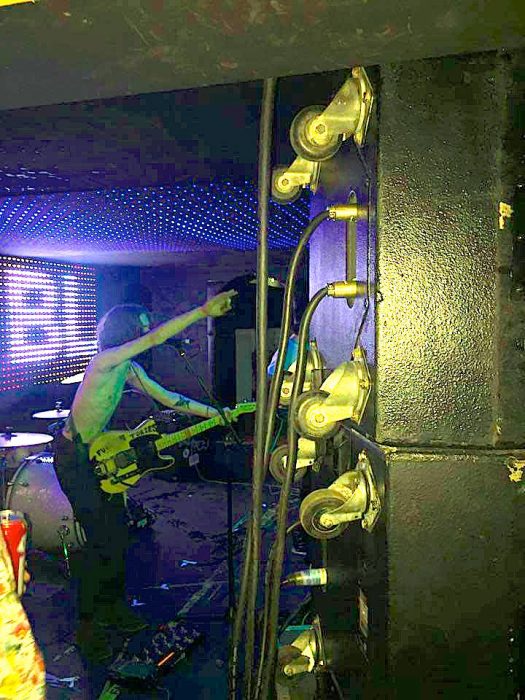 What better way to dump 2016 than to spend New years Eve hanging out with the future.

The Blinders quite literally explode onto the stage of Manchester’s newest venue with the combustable confidence of a young band who know how good they are. This is not arrogance. This is just knowing. I’m not the only one who is buzzing on the rush of their glorious high decibel brilliance – a couple of members of Cabbage are DJing tonight and yelling down my ear about The Blinders being he best young and in the UK and they are right.

Everyone keeps asking where is the band that will lead the charge against the cosh coming down? and whilst the UK is teaming with talent it’s great to see a band who still believe they can change the world with their righteous poetry and incendiary songs.

The trio, who hail from Doncaster, have moved to Manchester and are igniting the local scene with undercover gigs like this one tonight that thrills there fervent following into a moshpit.

Sometimes you see a band that has everything and the Blinders is that band. They have the songs, the adrenaline thrills and the chaos where the songs are about to fall apart but don’t thing nailed down. Frontman Thomas is face pained like Jaz Coleman Harlequin madman, stripped to the waist skinny freak show, his skeletal frame throws itself around the stage and his guitar oozes feedback, cheesier rhythm and surf guitar from hell licks and his voice is caustic and impassioned and yet delivers molten melody and angry political lyrics in a beat poverty scrawl. It’s like Allan Ginsberg;s Howl cranked through fuzzbox and the poet laureate of the post Brexit teens suddenly realising that they are inhereting a runaway disaster car crash of a country. Thomas and his band may be pissed off and are answering back but they somehow make it fit into pop music like the early manics did or the Pistols and the Clash did and the audience which is a 50/50 split between wild youth and dancing girls is testament to their ability to channel their emotional skree into pop perfect.

They certainly have the songs – perfect exercises in dynamics that ebb and flow around a shit tight rhythm section that really kicks and provides the support for Thomas’s guitar that either twangs like a surf guitar from hell or kicks into climactic explosions – it’s the same kind of dynamic that Nirvana once employed but done in a very British way.

There are traces of Arctic Monkeys to their sound – with clever songs full of quirks and changes and smart words but these are serious times and the band drip an intensity I’ve not seen since Kurt Cobain’s band exploded in Maxwells in Hoboken when they started out.

Tonight’s gig is as exciting as that.

The Otherness are supporting tonight and have trekked all the way around the world from Argentina to play a bunch of gigs in the UK. Tonight they bear witness to the curious flat UK New Years celebrations where a gig like this is a real high point whilst all the surrounding pubs are empty and no-one is on the streets- it’s like a Saturday night with no people in town – very curious – the greedy bastards killed New Years Eve dead years ago and they tried to do the same with rock roll but the Argentinean band are true believers in the form and fly the flag for perfect melody and harmonies, great guitars and the sheer thrill of playing the classic guitars/bass/drum chassis around those hallowed benchmarks of the Beatles and the Ramones. It would be deadly dull in most people’s hands but the band somehow find new fire and new life in the ancient form and make you believe all at once again the beauty and purity of the form.