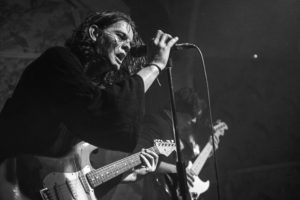 One of the cool parts of the sprawling and ambitious Manchester International Festival is the bands playing in the city’s main square. All day there is something going on with a bill selected by the Festival themselves of bands reflecting the home city’s ever burgeoning music scene.

Matthew Whitikar has come down to earth from his normal role of being the lead alien with the rather wonderful Henge. He has swopped his outer space attire and even more out of space music for an acoustic guitar and a set of brilliantly musical outings that are closer to Django Rheinhart and even Chet Baker with jazz chords, sweet singing and the sung trumpet parts delivered by the engaging singer.

Pagans SOH have been making a name for themselves with their scuzzy street rap rock – a form that normally never makes much impact with UK bands but there is something oddly affecting about them and already a big crowd have gathered for their filthy grooves and righteous ire.

Tonight is a revelation for Witch Fever – the band have been building a big reputation for months now and all that tension and promise explode in a stunning set of powerful music that is like a wild filthy feral beast like Jesus Lizard kicking out the jams with Led Zep but with a hardcore angst and a post-punk sense of adventure plus an added 21st century riot grrrl sense of abandonment and celebration. There is so much to unpack here – the rhythm section is mighty – heavy drums and the most hip grinding bass since Tracy Pugh hung up his 4 string since his days in the Birthday Party, a genuinely Sabbath slab guitar and unshackled and captivating vocals. Their set included a new song -their best yet – which featured a fab sliding bass adding to the wanton sense of swing and brink of chaos thrill of the band.

Witch Fever are primed and ready to go.

They have the songs and they have stage presence, their singer is a charismatic waif who owns the place and can fill a huge space with her voice. They may be noisy and dangerous but they also genuinely rock and have the songs and it can’t be long before they break out of being constantly tipped and become one of the key bands. They also have a fierce following of skinny youth who will be the next generation of high decibel deliverers in the city and the reaction tonight reached way beyond even this and took the whole place.

This really was was one of those magical evenings when you watch a band truly arrive.

The Blinders have arrived and it was a hero’s welcome for the band, who may not be genuinely new any more, but are young enough to still feel like the future. Their atmospheric yet adrenalised songs sound even bigger and more powerful with the added percussion given then a tribal thunder. Their dynamics remain stretched, taut and tight and the songs are anthemic rallying calls for the disposed left beyond the fringes and part of the soundtrack for the new generation music freaks who love IDLES, Fontaine’s DC and all the new noise that is rejuvenating the circuit.

The Blinders are now more polished and less chaotic and that’s a good thing. They have learned to bring the audience into their intense rushes. They know how to exploit the space and enjoy the silence before exploding with a feline power. The band are now easily one of the best young bands in the country and play with an intensity and conviction that makes you, once again, believe in the power of rock n roll.