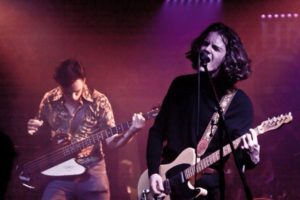 Every now and then something comes along that restores the faith.

The Blinders are playing about their fourth gig and they are so self assured and so ready that it’s impossible to think of them being unknowns for more than a few more weeks.

The band are dealing a jagged, poetic indie blues that has shades of Nick Cave, Amazing Snakeheads, Fat White Family and even the dear old Fall without sounding like any of them but with that kind of loose cannon aura. They have also managed to find their own space in this over crowded battlefield and that’s no easy trick. They sound original and they have songs that could be indie anthems and they are already ready – they just need someone to light the touch paper…tick! tick! tick! boom!

10 reasons why the Blinders are ready and why you will love them.

1. Songs – The Blinders may veer towards the dark heart of the blues howl but they are couched in the same kind of understanding and knack for writing great yet electric pop song as the Arctic  Monkeys who may have been the entry point for these young musicians in their youth before the whole weird world of underground rock presented itself to them.

2. The lyrics – you can hear these great phrases and shards and snippets of lyrical brilliance cutting through the noise. They talk about the great John Cooper Clarke after the show and you can see why. Instantly intriguing and beautifully written pieces of poetic brilliance that veer towards the dark side and some kind of mystic story telling but down to earth in a northern kind of way that only a bunch of young guys from Doncaster who have reacted to their new home in Manchester can muster.

3. The voice – frontman … has  a killer voice. It’s a thing of wonder. How someone who is still teenager can sound so world weary and wise and deliver it with a howl full of cracks and yet still hold a spellbinding tune is key – the only other person I can think of is the young Kurt Cobain when I saw Nirvana play to ten people in the sticky heat of New York City in 1989

4. Dynamics – most young bands playing to their mates will go for the jugular and explode into an energetic frenzy but the Blinders hold back building a smouldering tension and it’s highly effective. they are also masters of the stop start thing with the guitar switching from scratchy Telecaster rhythm to fifties slapjack twangs as it hooks around the loping bass.

5. The ‘cool’ – the band have that thing, that cool thing – not a studied cool but that thing when you know you are good and not in an arrogant way. The bassist has a semi quaffed up swagger and the singer is lost in a nest of hair and they already look like 21st century band without any cruddy stylist meddling – they have their own sense of style.

6. Electricity – this is a band that may be only months old could already be placed in front of any festival crowd and tear it down. If only there was enough time to get them onto some bills – they could be the festival breakthrough band of the summer.

7. Politics – Not often these days you speak to a young band and they chat about how their songs are laced with social concerns and how the homelessness in Manchester has really affected them. Somehow they turn this into their poetry.

8. Attitude – They have no bullshit about them – they are lost in the thrill of being in a band and are steeped in music and conversation switches from one band to another as the display their deep knowledge of this music stuff.

9. Timing – We need a band like this right now.

10. Manchester is burning – look -it’s not a ‘scene’ but their is a mutual respect between bands like The Blinders and Cabbage – bands that are making deeply intelligent, dangerous music that is also thrilling pop and could soundtrack a perfect lunatic summer.