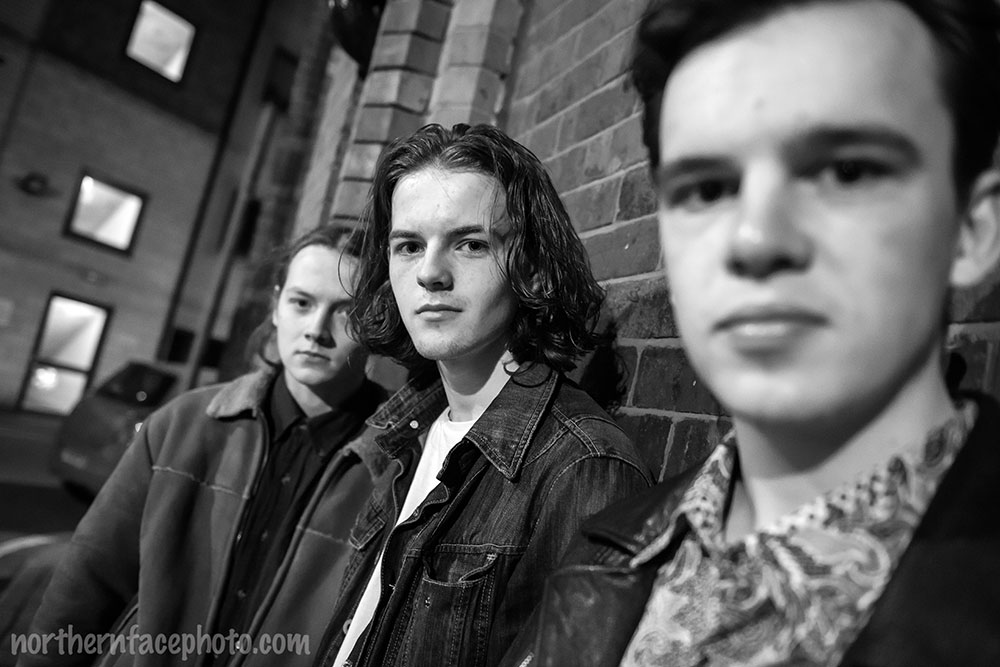 The Blinders stormed The King’s Arms in Salford on Friday night – Nigel Carr and David Gleave were there to capture this unique event for Louder Than War.

“we get quite political ‘cos why the fuck not at a time like this?”

Every once in a while something comes along that is so good, so fresh and so vibrant it completely redefines the concept of what sounds ‘normal’. The goalposts dramatically shift and from then on the bulk of what’s gone before suddenly feels boring and passé.

I give you The Blinders, the freshest, most exciting band I have heard for a very, very long time. From Doncaster but currently working out of Manchester, this band epitomises what’s great about live performance. This isn’t ‘stand around swaying to progressive beats’ music – it’s ‘in yer face’, loud, visceral, political punk rock. ‘Punkadelic’ – their description, not mine, and it bites your arse and won’t let go.

The band members who all chose to come to Manchester for the music scene as well as to study are: Thomas Haywood: Vocals and Guitar, Charlie McGough: Bass and Vocals and Matty Neale: Drums.

I had a brief chat with them at the back of the pub and they filled me in on their influences and direction. Thomas: ‘As much as we love Doncaster it’s died a death musically. Matty: We like Nick Cave, The Strokes and Queens of the Stone Age. Thomas: We mash it all up like, but we put a theme in the music where we get quite political ‘cos why the fuck not at a time like this?, we’re like – Punkadelic’.

Matty: We didn’t just want to be another band from South Yorkshire copying another South Yorkshire band, we wanted to get as new and original as we could, but at the same time play music we wanna play’.

The music is as intense as Slaves with carefully crafted lyrics and an explosive delivery. For example, I Can’t Breathe Blues is about the death of Eric Garner at the hands of the NYPD; the recorded version is preceded with the police recording, ‘I can’t breath, I can’t breath’ – it’s pretty harrowing stuff.

Charlie: ‘Tom will come in with an original idea then we will jam that out and then form something’ Thomas: ‘The music is all three of us, but the vocals are mainly Charlie, we are really individual with our lyrics, sometimes writing at two in the morning, what I do with Charlie’s lyrics is take them away and tailor them but we do a spoken word and that’s untouched’.

Matty: ‘I was always told that if you make a groove that gets your feet tapping then you’re on to a winner – like 7 Nation Army. Thomas: ‘Our old stuff was shite but it was The Wytches that kind of did it for us, all shouting and grunge’.

The Kings Arms has a large room upstairs with a kind of vaulted turret arrangement on the top; the band have no light show or fancy set, just them on a slightly raised stage at the back of the room. They open to a blare of distortion and sustained feedback and launch in to Pigfuck with its dirty scratched fuzz guitar and huge bass driven hook. The chorus ‘there is no hope, there is no hope’, is delivered in a throaty yell, reminiscent of Cave’s Release The Bats era Birthday party and The Stooges. It’s loud, infectious and utterly enthralling.

Thomas, standing stage left sings with his long hair draped over his face, parting it occasionally to blast out the next line. Tracks 84 and the aforementioned I Can’t Breath Blues follow; tight and formed with amazing bouncing melodies lead by Thomas’s soaring guitar riffs. Charlie’s bass is faultless, underpinning these songs as he struts around the stage and Matty plays the drums like a man possessed, never missing a beat, keeping the whole band together. 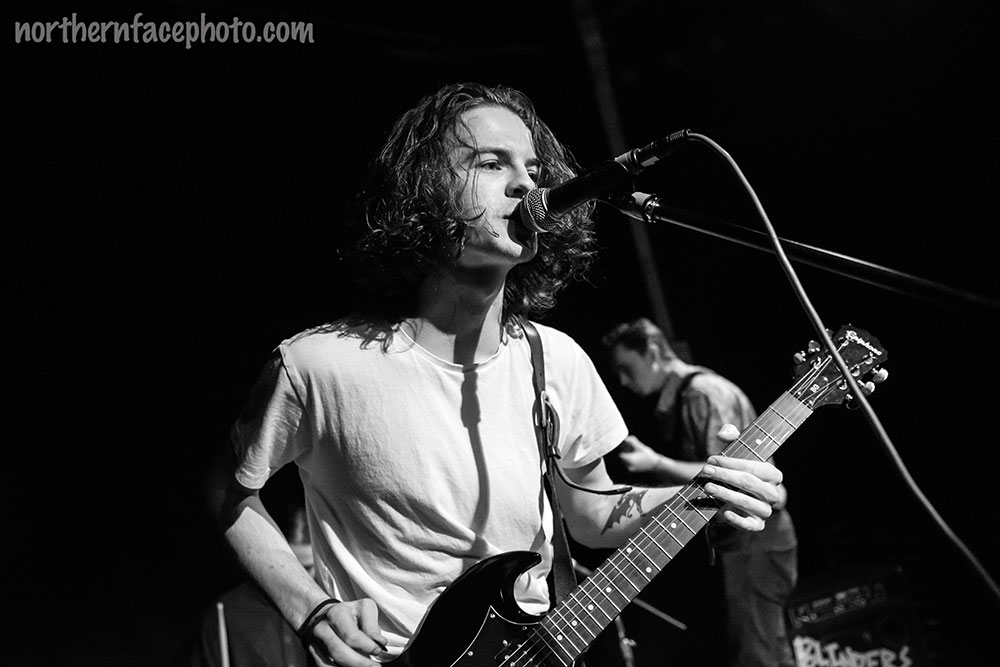 The set is short, barely half an hour; the band don’t have much more to give but what comes across is the searing intensity of these songs, the absolute belief in the subject matter, the attitude, and the riveting performance that just sucks you in. At the end of poem Free The Slave for example, Thomas can’t stop his guitar from delivering the droning echo loop which backs the track; he storms off stage and just throws it on the floor, marching through the crowd to find a replacement, which thankfully support act Cavana are happy to provide. It’s that kind of committed,  ‘couldn’t give a fuck – let me play my music’ attitude that defines the front man.

I have seen the future and it’s Punkadelic! – a full on aural assault and it’s coming to a venue near you soon!

The Blinder are on Facebook and Twitter – their latest EP Hidden Horror Dance is available on Soundcloud with a physical 7″ out shortly.