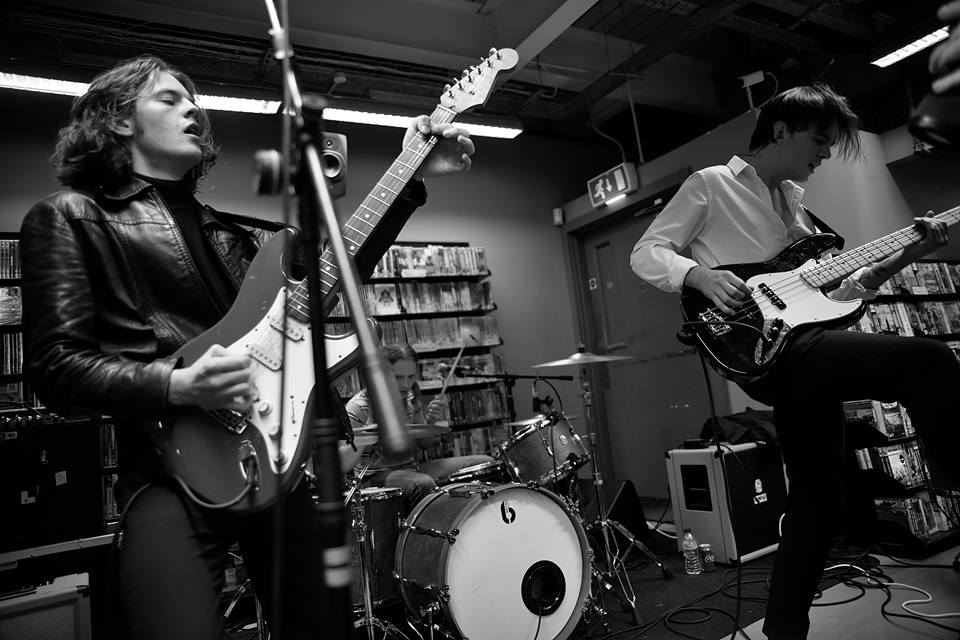 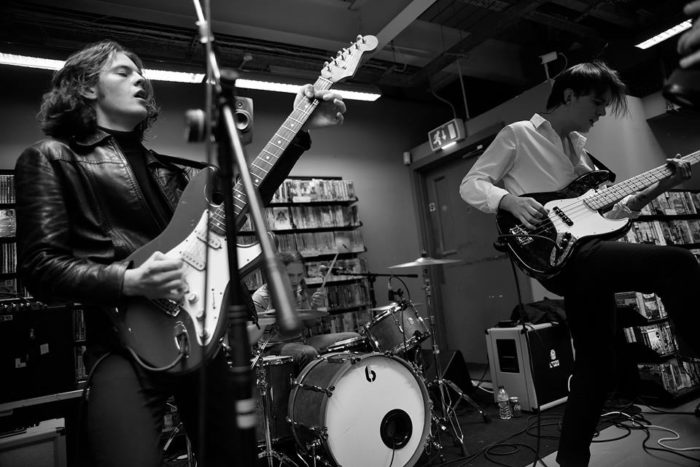 This was a momentous day for the Doncaster lads adopted by Manchester to air their album on the day of release to a small crowd of diehards who have been waiting under baited breath to hear this amazing debut in the most apt background of a music store. Wayne Carey is there to capture some of that energy.

I’ve been following The Blinders for a while now and have seen them progress into an incredibly tight bundle of fuck off rock n roll glam stomping musicians who are serious contenders to put the rock star back on the map. Tom enters the tiny stage looking natural without the usual face paint he dons when usually performing at a gig. Don’t let this fool you… They play the album almost in its entirety leaving out the quiet numbers and giving us 45 minutes of pure in your face dirty rock. Gotta Get Through sounds menacing and a shout out must go to the sound guy who has got everything just right for a venue this size. Charlie as always has that young Nick Cave look about him and is a pure showman on bass and Matt pounds those drums like a devil at the back to perform their tighter than ever sounds to provide that crucial backbone. Hate Song crawls all over you with its dirty rock sound and Tom throws himself around like a man possessed as the song ramps up with speed and there’s one young lad in the audience who looks like he wants to freak out! They are joined by a second drummer for Where No Man Comes and it adds a tribal element to the song which is a proper glam rock crusher. I Can’t Breath Blues is gonna be a highlight of their live sets and the band blast their way through showing the chemistry, all smiling at each other as if they know it’s all clicking together. The twin assault of Et Tu and Brutus are stunning. Brutus is as excellent as ever and wins over the lucky ones that are here. Anyone who’s seen em live before will tell you this is one of their live rock out masterpieces and totally up there in the rock stakes. They end with Rat in A Cage which comes across as a punk Rolling Stones number that Mick himself would be jealous of. Tom ends the set with the refrains of Orbit, the last track of the album, and it just teases you as he only plays the first few bars then thanks everyone for turning up to support them on their great debut platter.

I could go on and on about this band but you need to see them live to understand how fucking good they are. The album will give you a taster (read Nigel Carr’s review here  )- however you need to get your arses out and actually see the power this trio create live. One of the best live acts around at the moment. You need to witness them. Trust me…

Tickets on general sale from here

Words by Wayne Carey who writes for Louder Than War. His author profile is here and you can catch his website here