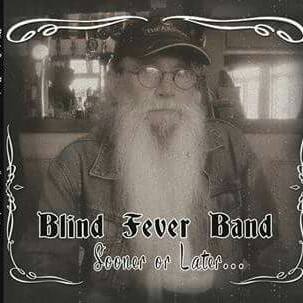 “Sooner or Later” is the debut full length release by up and coming festival favourites Blind Fever Band.  Alan Ewart discovers a heady mix of Blues, Skiffle, Bluegrass and ragtime in an album sure to get you off your butt and on your feet.  Blind Fever Band come over brilliantly live, but does this translate well to disc?

The Blind Fever Band were formed in Mansfield in 2011 by Steve Townsend and Kev Hubbell and have recruited guitarist Dom Basheck and the former Ferocious Dog rhythm section to expand the line-up.  Blind Fever Band come from different musical backgrounds and draw their influences from right across the musical spectrum.  They cite blues, folk, country, punk, rock and cider amongst their influences.  I was introduced to the band at the 2014 Bearded Theory Festival, loved their energy and their debut EP and couldn’t wait to sample their first full length release.

Father and son team Dave and Brad Drury form a formidable rhythm section and their experience playing together serves to hold the musical mayhem that forms the whole together.  Those who have seen the band play live will know that they play a high energy show which is full of toe tapping fun, irreverent lyrics and hillbilly hobo attitude.  Live Blind Fever Band exhibit sheer joy and a sense of fun playing together.  There is a real chemistry within the band and the joy and energy comes across brilliantly well on disc.  As a result Sooner or Later has a pride of place in my car stereo. I hate driving but Blind Fever Band always manage to put a smile on my face.

Blind Fever Band have pulled together a fantastic collection of tunes split pretty much 50/50 of original songs and blues standards.  The musicianship is very tight and energetic, the banjo drives the songs.  Where the banjo provides the energy the rhythm section provide the heart, it is rock solid and often understated and the combination in my view shows how far the Blind Fever Band has come in a relatively short time in their expanded format.  It is difficult to pick out anyone for special praise because the whole is greater than the sum of the parts. 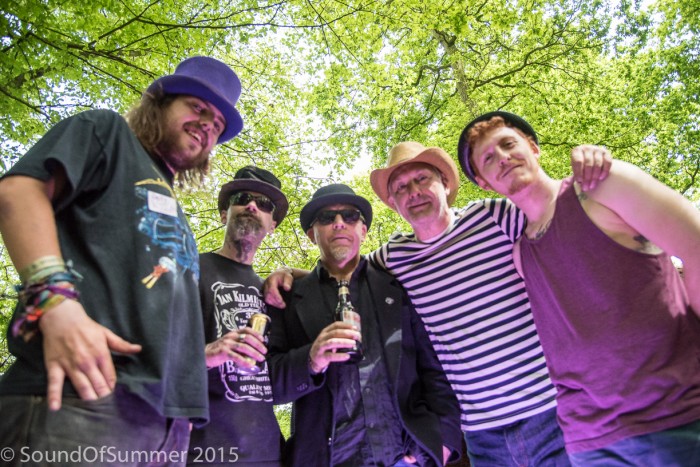 For me at least Blind Fever Band pull together perfectly as a unit.  The parts played by each band member compliment and add to the overall resulting in a sonically rich sound.  The original songs like “Funky Cigarette” stand perfectly side by side with the old Lonnie Donegan favourite “Diggin My Potatoes.”  Blind Fever Band makes every song their own to the extent that you sometimes question which songs are standards and which are originals.  When you hear classics like Cripple Creek or Pete Seeger’s Old Dan Tucker you really are left wondering if they are in fact Blind Fever Band originals.

Like all really good albums Sooner or Later leaves you wanting more.  You always feel disappointed when it ends and I often find myself playing it through a second time.  I love the duelling between the guitar and banjo, the occasional blues harp interludes and the sheer pace of it all.  This is an album that simply spreads happiness and joy.

Finally I must comment on the quality of the sound across the piece.  Phil Taylor has done a brilliant job mixing and engineering this album.  The sound throughout is top class, if only all self produced albums achieved this quality.  Well done to everyone involved.

Blind Fever Band are on the internet here:  They are also on Facebook and they tweet as @BlindFeverBand.

Words and Photograph by Alan Ewart: you can follow Alan on Twitter at @soundofmysummer or on the internet at soundofsummer.org and you can read more posts by Alan at his Louder Than War author’s archive.