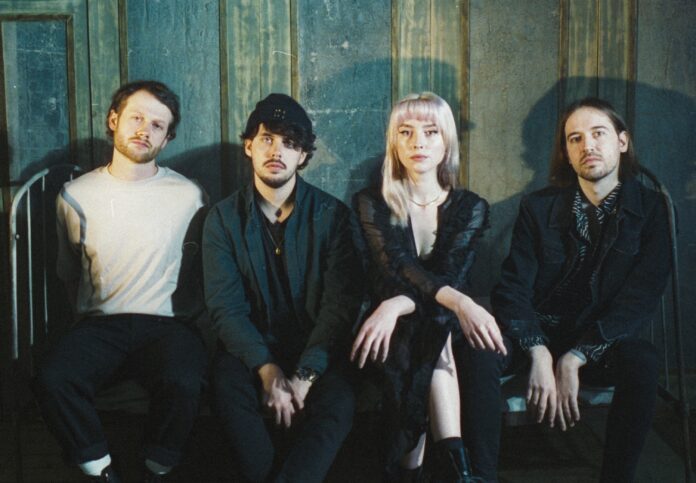 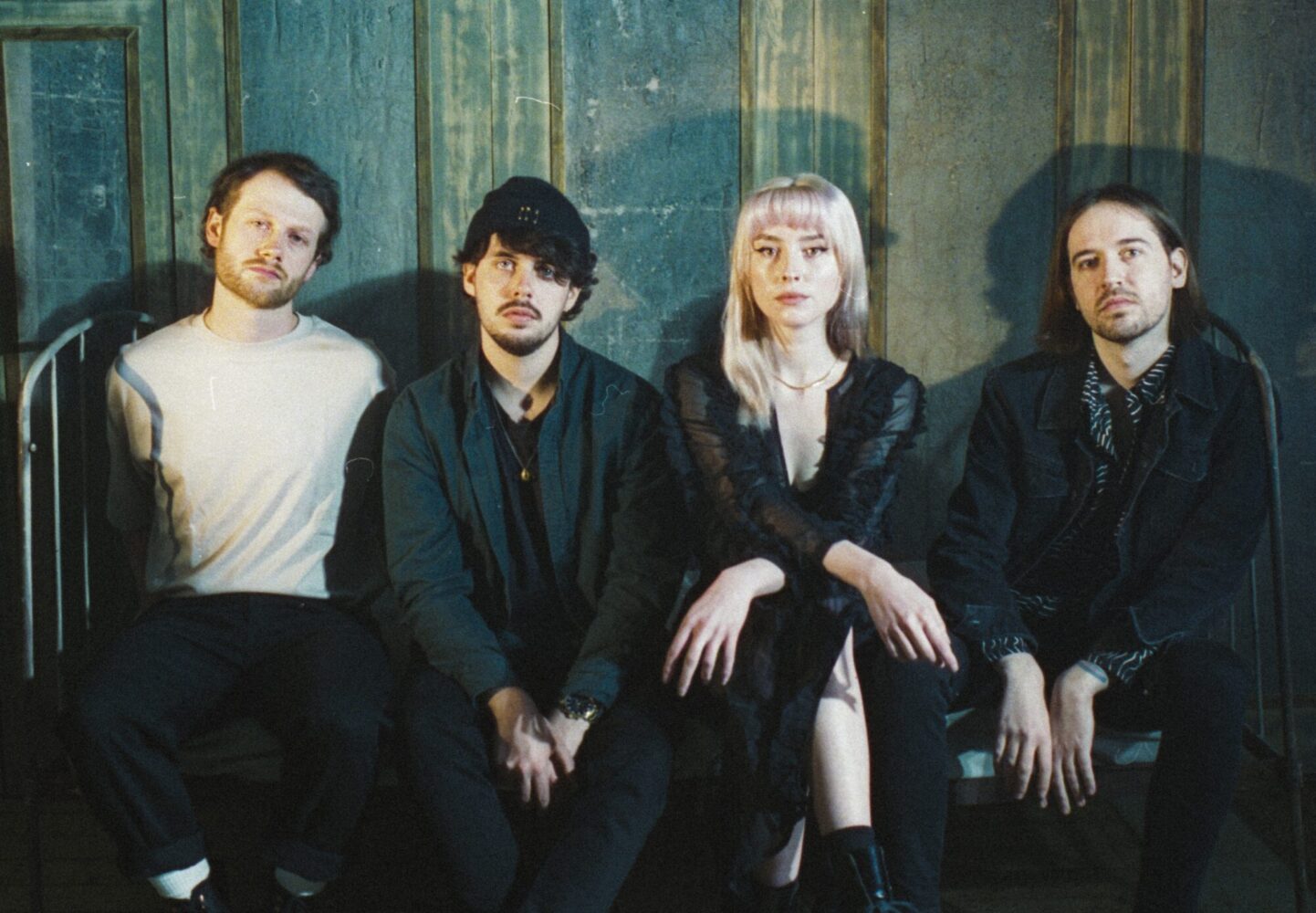 After releasing their critically acclaimed debut EP A Calm Sense Of Surrounding hotly-tipped London/Buckinghamshire based quarter Bleach Lab gear up for the follow-up, the equally impressive Nothing Feels Real EP.

Andy Von Pip had a chat with vocalist Jenna Kyle, guitarist Frank Wates and drummer Kieran Watson about creating new music during COVID, working with Stephen Street, and leaning into their influences.

Having played their debut gig at Notting Hill Arts club in 2019 the future was looking bright for Bleach Lab, and then COVID hit … and everything stopped. The band who comprise of Jenna Kyle (vocals & guitar), Frank Wates (guitar), Josh Longman (bass) plus recent addition Kieran Weston (drums) were initially worried that any momentum they had gained would quickly evaporate. Jenna Kyle explains  “there were certainly a couple of months at the beginning of the pandemic were we did feel very flat. We’d all worked so hard to get where we were. But we looked to the positives, after all, we were still writing and working toward a goal, albeit one with moving goalposts.” Guitar Frank Wates is equally as pragmatic reasoning “the bottom line is, we and every other band did lose momentum, the world stopped for everybody. Under normal circumstances, if an artist is out of action for a year then that could be hard to recover from, but if  everybody is unable to play live music then we were all on a more level playing field.”

In March 2021 the band self-released their debut EP “A Calm Sense Of Surrounding” which explored themes of loss, grief and bereavement. For Kyle it was the end of a relationship, for bassist Josh Longman it was the death of his father that informed the EP as they set about exploring five stages of grief – anger, denial, bargaining, depression and acceptance. The band eloquently traversed these emotional undercurrents often using the sea as a metaphor on a body of work underpinned by emotional intelligence and literate, poetic wordplay. They were delighted by the response if not a little taken aback “it was the first fully-formed project we’d put out into the world so it’s kind of like going in blind, we had absolutely no idea what would happen. But the response was incredible” enthuses Kyle. “We explored some very personal topics and the fact that so many people related to it, well, that’s all we could have hoped for.”

Bleach Lab have been working on their forthcoming EP “Nothing Feels Real” and the addition of drummer Kieran Weston certainly added a new dynamic. “ Having just joined the band during the Lockdown, I certainly had more time to contribute to the overall sound” explained Weston.  “That’s so true”   agrees Wates,  “Kieran’s input on how the new EP sounded was huge. The truth is it’s highly unlikely he would have been in the band if it hadn’t have been for Lockdown. We suddenly found ourselves in a situation where we needed a new drummer quickly! We had just been approached by a booking agent which was quite stressful as we thought – they won’t want us if we don’t have a drummer. So we quickly auditioned Kieran when things had opened up briefly and it’s testament to how well he did that, despite the timescales it didn’t feel like a risk.” “ And then we had another Lockdown” adds  Kyle, “so I didn’t actually even meet Kieran in person for  months, which was quite bizarre, as we had to do everything remotely.”

“Nothing Feels Real” expands on Bleach Lab’s sound and whilst Kyle and Longman both still write from a very personal perspective, unlike the debut EP there’s not an overarching theme. “Well, it is an extension in the sense that we are still exploring and writing about our own experiences” Kyle reasons. ”But there’s definitely less of a specific theme although we do explore relationships, and mental health again.” However, Wates feels sonically at least,  that “Nothing Feels Real” feels far more cohesive than their debut: “I think this time around, to use a horrible word, there’s much more “synergy” in terms of the overall sound. Some of the comparisons we are getting from the first EP were very flattering and in some ways, you could say the second EP is us responding to those scenarios. Seeing what would happen if we effectively leaned into them slightly whilst of course crafting a sound that is our own. As a result, I feel this EP is a lot more consistent.”

Music journalists often look to the past look for musical touchstones and for Bleach Lab artists who have been used as a comparative on more than one occasion are Mazzy Star, The Cranberries and The Sundays. Mind you Bleach Lab can’t be accused of subconsciously channelling the latter as they admit they had never heard of The Sundays until they had been referenced in reviews. “It’s true” laughs Wates “but after we got the comparisons I did spend a lot of time listening to The Sundays. There’s no doubt they were an incredible band and probably should have been much bigger than they were. I think the first single from the EP “Real Thing” definitely does have a Sundays vibe whilst we’re hopefully still retaining our own personality.”

Whereas EP one was very much a DIY affair, “Nothing Feels Real “ was recorded with iconic producer Stephen Street. The band were keen to work with him due to his track record and a sense that he would bring out the best in them. Wates takes up the story – “one of the reasons we wanted to work with him was we just felt he would understand us and help create the sound we wanted better than anybody else. This of course was due in no small part to his incredibly prolific career within the eras of the bands we were being compared to”. And you can hear Street’s influence coming through on the EP, for example, recent single “Violet Light” does have a slight Smiths vibe, and his subtle and insightful production has brought an undulating shimmer to Bleach Lab’s already beautifully bittersweet sound.

The process of recording this EP was drastically different to their debut which was disrupted by COVID meaning it took much longer and was recorded in a friend’s studio. Working with Street was an entirely different process. “It was efficient and professional”  laughs Wates “two words I wouldn’t perhaps always associate with a good creative outcome, but in this case, it really did work in our favour. We didn’t have too much time to overthink everything and arguably it was a much nicer way to go about recording our music.”

The band have self-described their sound as “sadcore” and although it is undoubtedly tinged with a  bittersweet sense of wistfulness there’s certainly no sense that everything is hopeless, listening to it sometimes feels like emerging into the light from a dark tunnel. “Well I’m not prone to hopelessness “ laughs Kyle, “but for me, music is my only outlet, my lyrics are a stream of consciousness, it’s my way of exploring what’s going on in my life and making sense of it all.”  “I’m not sure if we really are “sadcore “ or we just co-opted the name because we got fed up with “dream-pop” laughs Wates, “But that juxtaposition of a shimmering happy melody with sad lyrics has always done it for me. It’s not always easy to get the balance right “ he adds “ I mean, you’d sound pretty psychotic if you started singing about death in a really happy upbeat way!”

Nothing Feels Real is released on 15th October 2021  – You can order it here  –  https://bleachlab.com/album/nothing-feels-real