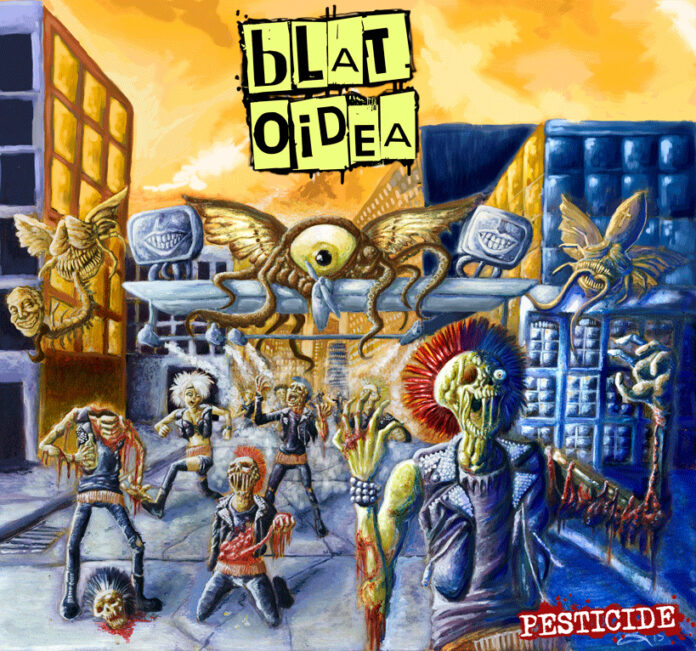 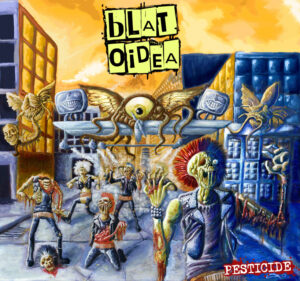 Second album from Blatoidea, the Sicilian punks who have been based in London since late 2008…’Pesticide’ is their debut for UK label Headcheck Records and continues the themes explored in their debut album ‘Infected’.

Apparently the band are tired of being likened to early period Causalities, that might actually have more to do with their appearance than their sound, though there are clear similarities; ‘Pesticide’ being a pure adrenalin blast that mixes 82’ era hard core punk rock, with touches of Rancid and even harder edge metal – the production is raw, but ramp up the volume and this hits hard…opener ‘Metamorphis’ is a ludicrously fast instrumental that sounds like your world is imploding around you, whilst ‘See Then Burn’ is everything you would expect from such a title, rabble rousing chorus, insane guitar riff, and almost screamo English vocals…same for ‘Laughing In His Grave’ which is built around a breakneck drum beat, its fast powerful modern hard-core punk that will instantly morph any audience into a seething over the barriers mosh-pit ready for ‘A New Order’, with its aggressive vocals, hints of maybe even Minor Threat before the entire thing collapses allowing you to catch a breath – you’ll need it for ‘Down In Hell’

Blatoidea aren’t about exploring new musical paths, the track titles tell you that ‘Maggot’, Pay The Price’, and ‘Rat Race – the play abrasive hard-core punk rock, every song comes in at around the 3 minute mark, but within that limited timescale they pack in an array of hooks and cosh across the face melodies that will fix you in bug-eyed attention…title track ‘Pesticide’ being the perfect example, this powers along, the emotive lyric “instigate, discriminate, re-generate, create a new concept of human race” hammered home, short lean and snotty punk delivered with passion – granted it might not be everyone’s chosen brew but the vitality and urgency Blatoidea offer up will more than please those with a penchant for this particular style of modern punk, the only real criticism being that they didn’t sing any of the tracks in Italian which may well have added a nice variation.