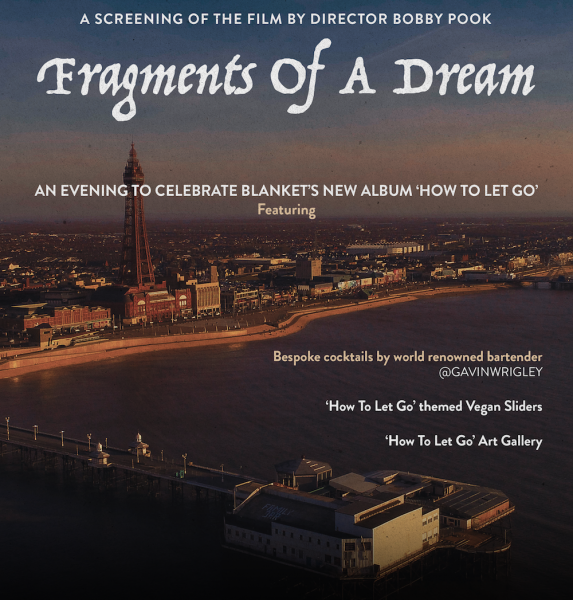 We were most impressed with Blanket’s How To Let Go (reviewed here), but not satisfied with just their debut album, the Blackpool quartet’s debut album, they’ve been busy preparing a short film about their hometown for which their music provides an evocative soundtrack. Cue the need for a weekend trip to the seaside…

Welcome to sunny Blackpool – oh I do like to be beside the seaside. The list of possible clichés is enviably huge. The sedate and civilised confines of Blackpool’s Central Library (just across the way from The Whippet Inn – geddit? – where local punters readied themselves for a night on the town …) being the location for a select few to enjoy a viewing of the film in the band’ s presence.

I’ve always had a soft spot for Blackpool, it being to destination for family holidays as a small child. The guest house round the corner from the Pleasure Beach, tram rides up the prom to the Tower Circus, deckchairs and donkeys and crabbing in the rock pools left by the tide. The tide is in tonight as we gather to see what Blanket have done.

First there’s a queue. Not to gain entry but for a taste of some rather exclusive cocktails dreamt up by Gavin Wrigley of the European Bartender School. Once inside, a chance to check out the album artwork and small gallery of images of the band in the studio act as an aperitif to the main event.

The film comes sandwiched between a short acoustic set that includes Radiohead’s No Surprises and a Q&A session, but it’s a meaty filling. Even in its short fifteen minutes, the need to rewind and rewatch as images drift by like a Blackpool flick book is provided by the availability of the final product on YouTube. It’s a film described as one that “attempts to show the reality of a once thriving seaside town, now a shadow of its former self,” yet accentuates what they term the “bizarre charm” of the town.

Music from How To Let Go – Our Tired Hearts, Worlds Collide and Immemorial Sea – soundtrack the footage which plays along with a narrative of Blanket’s Booby Pook’s grandfather which adds a touch of nostalgia from someone, like me I suppose, who’s seen the town evolve over fifty or more years. The film itself combines glimpses captured in slow motion, timelapse and aerial photography, it feels like you’re never more than a few frames from a seagull, either battling against the sea breeze, swooping in flocks or pecking round the back alley bins. Never far from the sea either, the gently breaking waves or the angry horse tails, calmly bobbing or just providing a simple horizon.

Bright lights and slot machines that promise fortunes contrast with homeless, peeling paint and rusty shutters. The names are there too – Gypsy Petulengro, Blackpool rock direct from the factory and Derek’s Tattoos (original and best since 1959). Step inside. The majesty of the Tower Ballroom and the current plight of Blackpool FC (“Oyston Out”) after their own dalliance in the upper echelons of football is a sharp reminder of the glory days of the Golden Mile fading to weary and worn.

“With the right kind of eyes you can still see the ghosts of the better days” runs perhaps the most telling of the many significant soundbites. The tagline on the artwork: “Blackpool – a place of dreams; a place of nightmares” says it all. Booby Pook and Blanket have created an evocative experience of not just their hometown but one that many could similarly apply to their own roots.

You can watch the Fragments Of A Dream short film here: