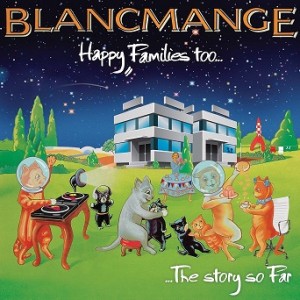 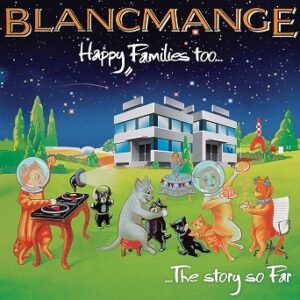 When Blancmange toured the UK in November last year it was mainly to showcase the ‘re-imagined and re-recorded’ version of their 1982 classic album Happy Families. With the tour came the CD (then only available at venues) and also the promise that it would be re-released with extra tracks by a major label in 2014. Cherry Red are the label and five additional tracks are now included.

This gives Blancmange the potential to hit a wider audience than with their own release on Blanc Check records. Even now, the Blancmange sound of old is still original and being the pioneers that they were/are, the updated Happy Families sits shoulder to shoulder with many of today’s contemporaries.

When they originally split in 1986, the maiden aunts of pop left with possibly one of their finest moments. Why Don’t They Leave Things Alone from the album Believe You Me was itself completely re-made and re-invented as I Can See It. The extended 12” was particularly superb and, to this day, remains a fine re-mix and completely listenable.

So the deluxe version of Happy Families Too is with us. It obviously contains all the tracks from the tour edition, but now with some nice extras.

First up is Running Thin, a track that originally appeared as the b-side of Living On The Ceiling and championed by John Peel during their session for his show. It shows maybe the darker side of Blancmange, not so much catchy chorus as atmospheric feelings.

Greg Wilson and Derek Kaye re-mix Feel Me. One of Blancmange’s more underrated songs, it peaked at number 46 in the UK Charts. Recently given a new lease of life by Faithless on their album The Dance it now proves what a forgotten classic it is. Greg Wilson has been round the block a few times, one time resident DJ at The Hacienda in Manchester and the man responsible for teaching Quentin Leo Cook (Fatboy Slim) how to scratch. Greg’s friend of almost forty years, Derek Kaye, is another well documented DJ from the North West with much chart success. Their re-mix turns the track into a bit of a stomp beat with shimmering effects. It’s well layered and organized as you’d expect from Wilson and Kaye and also very different to any previous mixes of the song.

Living On The Ceiling is re-mixed by none other than Vince Clarke. Recognised as a modern day musical genius, his reputation as a co-writer, producer and re-mixer is second to none. Here, his re-mix pumps away with Neil Arthur’s vocals staggered and re-verbed in and out. The Clarke sound is unmistakable, turning it into a club version with the accentuated hook of the original.

But the real interest here are the two re-mixes by Komputer. Formally known as I Start Counting and Fortran 5, Simon Leonard and David Baker really do strip away Cruel and God’s Kitchen to the bones. Cruel is barely recognisable as it slowly moves along all but instrumentally with sampled voice bytes and added light percussion. It’s delightful in its simplicity. God’s Kitchen on the other hand is instantly recognisable. Full vocals here with echoes and a compelling bassline that makes the song so addictive. There’s also an interesting, almost 80s sounding synth in there too taking you back to the sound of I Start Counting’s underrated 1984 single Letter To A Friend, and a sampled Arthur sounding like he’s gargling salt water.

With a new album scheduled for later this year, this is a reminder of one of Britain’s most popular and inventive musical acts. Happy Families Too just got better.