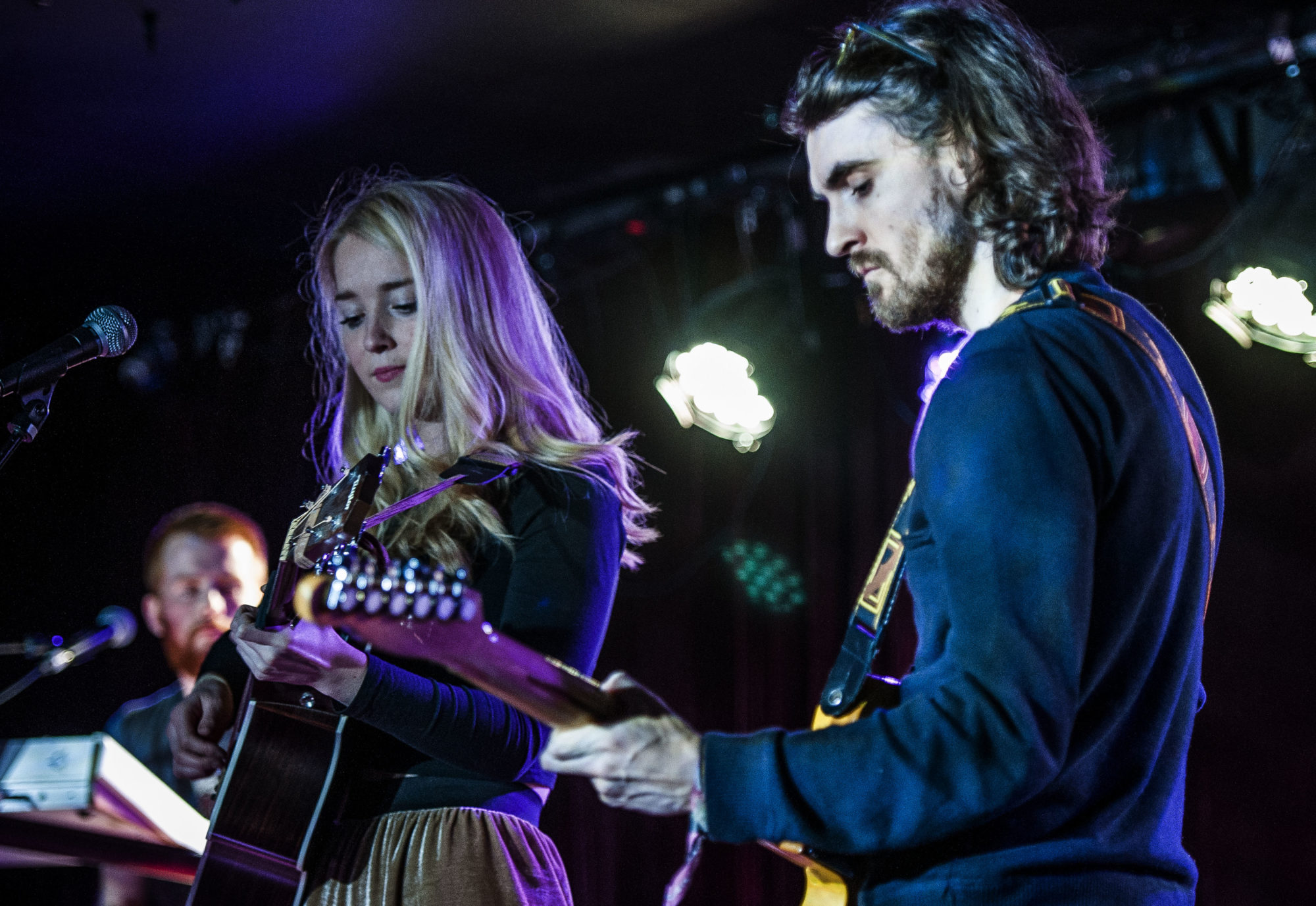 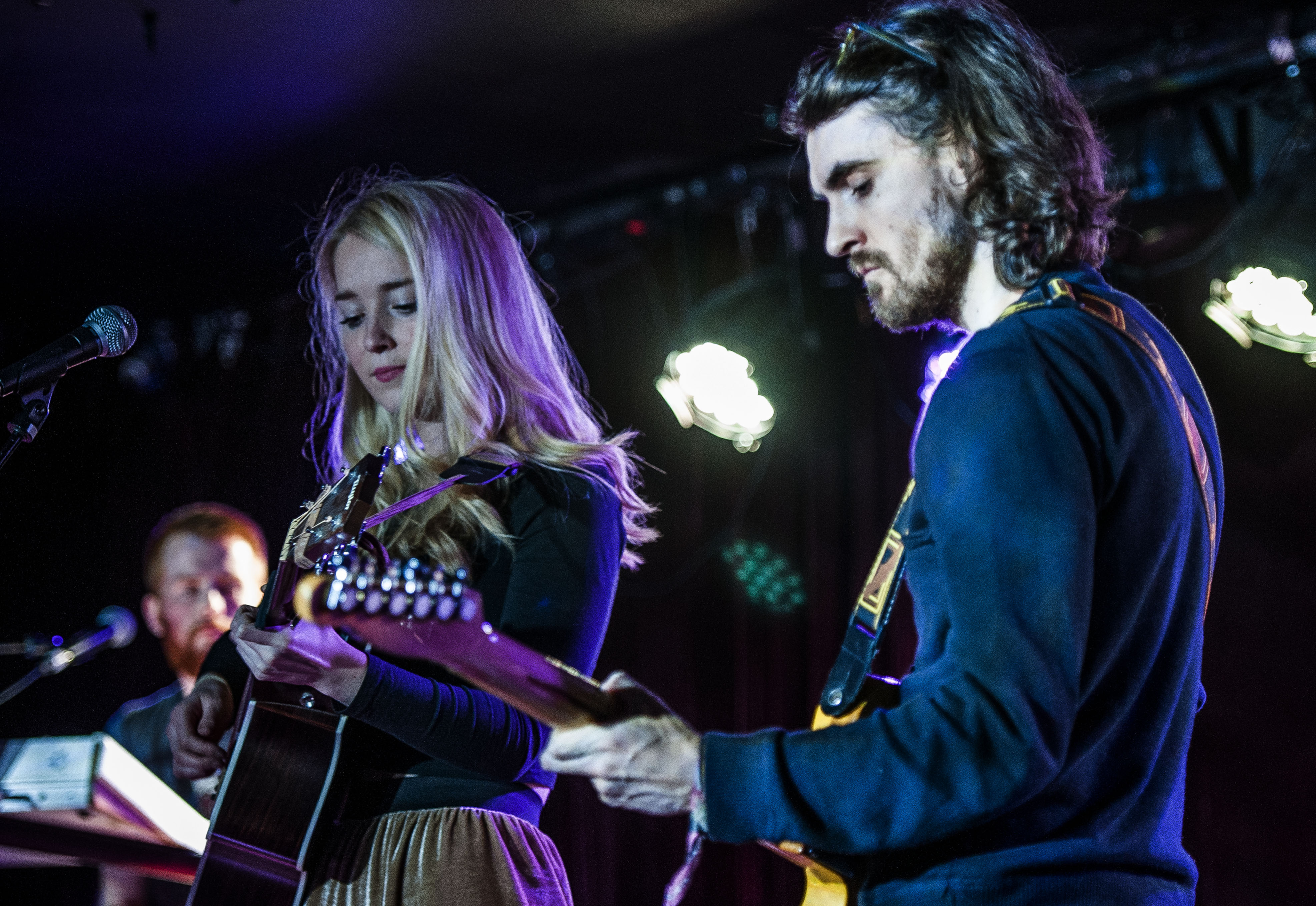 With last year’s Gilded album now ticked off  as done and dusted, Blair Dunlop and his two piece band get the chance to head out on a Re-Gilded tour. Accompanied by South West songstress Kitty Macfarlane it’s a grand opportunity to test out some new material. Louder Than War’s Mike Ainscoe reports.

You’d never guess from her delicate and angelic appearance that the award of ‘biggest balls in the venue’ would go to Kitty Mac, opening proceedings singing 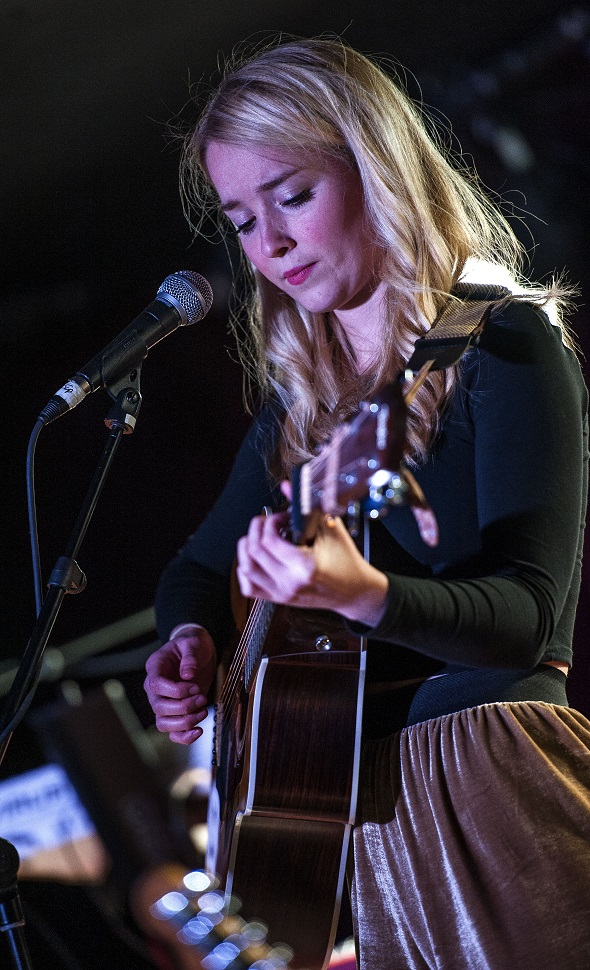 unaccompanied, but it does.

Taking advice from her tutors, she sings about what she knows. In one instance it’s Bus Song as one of her earliest songs about…erm, a bus ride, gets an airing, but in the main, she knows about beaches, tides, coastlines and water. Subjects that feature strongly on her Tide & Time EP, culminating in her cover of Song For The Siren which naturally fits the bill. There’s a chance to encounter a new song which is at the evolving stage, admittedly finding it’s place and currently in the ‘not the same ever night’ guise.

Of more interest is her encore of Wrecking Days where she’s joined by the headlining band and the tantalising  proposition of her toying with developing her sound to include a band to add to her gentle finger picking.

Accompanied by the drums and keyboard duo Fred Claridge and Jacob Stoney, the Dunlop trio is now one that’s well established and one which transfers his recorded output pretty true to the live setting. Back from Kansas, flying ‘the British are coming’ flag at the Folk Alliance industry event and having a jolly beano by the sounds and looks of things in the social media.

As on Gilded, Castello opens, name-checking Manchester and Joy Division – unlike the song which quotes Ian Curtis’ crew as plenty of feel but lacking precision, the Dunlop trio apply both craft and passion based round a healthy re-visit of Gilded and the chance, as he seems to do these days having already toured on release of the album, to try out something new before heading into the studio.

First up is one which builds from a country feel with  another name-check, this time Ry Cooder, and one which went down well in the US naturally. It could be called Sweet On You, a phrase which sticks in the mind and  sounds very much the part and is typical of his slight shift away from the folk roots – it’s all about girls, girlfriends and their mothers, Blair in love song mode, his relationships a ripe mine to be veined for his lyrics and like Kitty earlier, finds him singing what he knows about. 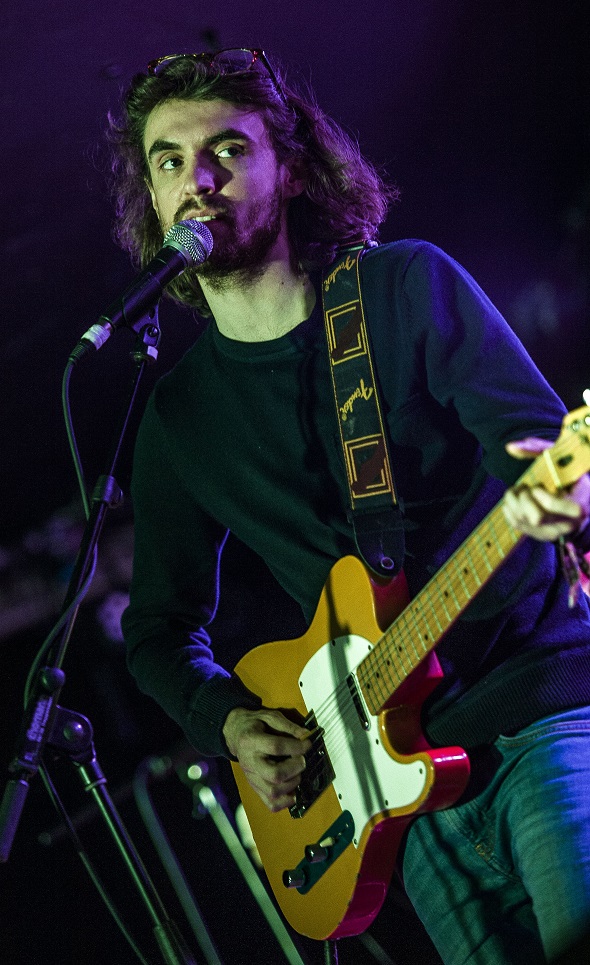 For those who are of the opinion that, like one of those bumper stickers,  he does it best on his own with an acoustic guitar, the mid set solo slot sees him showing his chops on No Go Zones jaunty and quirky accompaniment with a serious message and then Springsteen’s Dancing In The Dark,  dusted off for a radio session and now slightly shoe horned into his own set, making  bit of a predictable radio friendly choice and done in a pretty faithful way; the thought occurs that it might be interesting to see what he might do with something from deeper in the Boss catalogue.

To counter, he debuts another whose title hangs in the balance  – Are They Remnants OR Within My Citadel – and brings the band back for another newie, another which seems to emerge from the Dunlop love/relationship experience and one that  sees them rolling on like some of his best work in The Station which sadly remains unplayed from his last album.

They finally get to crank things up and rock out on Up On Cragside and 45s before an encore of a  brooding Ballad Of Enzio Laviano while Kitty gets her guitar technical difficulties sorted for the company to add their parts to Kitty’s Wrecking Days. A character whose easy and relaxed manner belies a consummate skill – the development of a set of young guns continues to be fascinating to watch.

Kitty Macfarlane can be found online. She is also on Facebook and tweets as @kittymacfarlane

All words and live photography  by Mike Ainscoe. You can find more of Mike’s writing on Louder Than War at his author’s archive and his website is at   www.michaelainscoephotography.co.uk