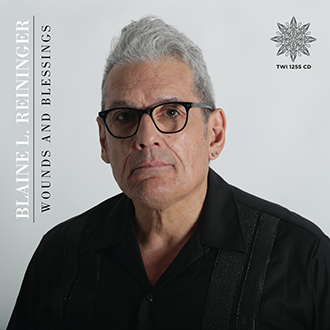 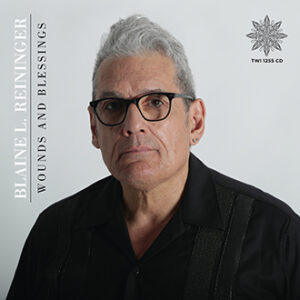 After his album The Blue Sleep appeared in 2018 (read the review here), now Blaine L. Reininger is back with a new collection Wounds And Blessings. The pieces included on the two CDs are split into four separate sections named Songs, Bricolage, Sourced and Serene, with nine entries each in the first and fourth parts and five apiece in Bricolage and Sourced.

Wounds And Blessings’ initial broadside comes in the form of the sweeping electronic pop of 100 Sad Fingers, with Blaine’s deep snarl intoning atop about “divine poetry” among other things. This gives the album a bracing introduction with lots of cutting guitars. I Inhabit The Dunes follows in a similarly accessible but edgy mode and Paul Zahl’s pummelling drum work really drives it along. Spirals of sound herald Je Retournerai and to make a bit of a generalisation, this part of the set should please people who dig David Bowie’s late 1970s recordings, with chilly synths and harsh guitars combining to present an epic overall impact.

Magnetic Flux slows things down a step, with piano keys drifting melancholically to a wobbly synth line, while percussion keeps a slow but steady tempo. Tense drones form the basis of the intro to Chemise Grise and what follows is as near as Wounds And Blessings comes to a ballad.

There’s a hopeful message in the lyrics of Trials And Tribulations, more an electro rock dance number that states “But in the next generation, the world becomes more beautiful, more alive” and we can only hope that this is the case. Then the sadness inherent in I Am An Old Poem is teased out by well utilising excellent backing vocals and strings. Full of strange imagery, Goby Life’s screaming electronics form the backing to a tale of a world of “skeleton shards of silk in the forest of glass” and the songs’ section is curtailed by the alien sound of The Days Gone By, which threads its story by way of eerie vocoder voices.

We then move into the bricolage (loosely meaning “made up of a variety of sources”) section with Roll Off The Edge, a staggeringly outré mixture of world music and industrial rock. Duello’s early harsh guitar grunge and ponderous bass moves are swiftly joined by a weird jittering sound which is added to a very buried vocal. In each line of Silver Pants’ lyric two very separate images are juxtaposed and drones and synth squelches feature musically, but the pace picks up on a bright Occult Simplicities. The first disc ends with the downbeat and mysterious Played Harvest.

Going onto disc two we start with the sourced part of this set. One Of Those Things presses synth squiggles into service and they are coupled with a distorted voice that resembles skat singing at one point. The electronica of Begin Your Day, Winny is another odd offering, full of spooky shivers and strange processed voices. You’re Lucky picks up the tempo with urgent, orchestral touches and the dancing synths, Hawaiian guitar and samples of Slipstream makes for a queasy sounding but intriguing enough item. Newbs Descending A Staircase brings the bricolage part to an end with a nicely rhythmic dance groove.

The final section of Wounds And Blessings comprises nine selections under the general heading serene. Lockdown Blues is 21st rainy day jazz really, but is very well done and has some great trumpet by Luc van Lisehout and Indra’s Dream runs on a pulsating rhythm with strings laid sensitively over the top. Die Ferne Klang is another very pretty and hypnotic semi-classical sounding piece and Sun Package’s gentle progress is boosted by some fine pedal steel by Bob Hoffnar. A gentle piano has echo added to good effect on the ghostly Unbirthday and the stately progress of Quarter Teen features Reininger’s Tuxedomoon bandmate Steve Brown providing some very cool saxophone blowing.

The almost static Cahiers Noirs is given an edge by a prime organ sound in the background, with the strings and guitar taking centre stage. Harvest Moon is emotionally performed and reflective and the album concludes with Push, where beeps, blips and squalls are frequently sideswiped by jabs of sound. This is all underpinned by elegant keyboard flourishes.

Wounds And Blessing is interestingly laid out, but the concept is not overtly explained in the packaging. Nevertheless, each item logically sits in its section and each section has enough in common with the rest of the record to not be at all jarring. I have to admit to being not really being too much the wiser on the general idea after listening to the album intently. But that doesn’t really spoil one’s enjoyment too much, as you can pick and choose which pieces of the puzzle to focus on, or just wallow in it as a whole. As this album with a work of imagination, occasional bewilderment and much beauty, the latter is a good option to take.